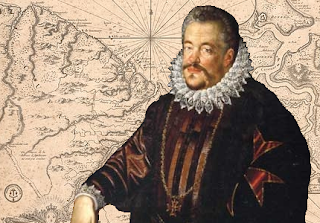 Although little remembered today, in the XVII Century there was an Italian effort to establish a formal colony in the Americas by the famous House of Medici. At the time, North America still seemed to be no more than a wilderness but South America was considered the most promising region of the New World. Had Italy been unified at the time things would probably have developed quite differently but, as it was, the project had to be left to one of the great Renaissance city-states, in this case Florence. In 1608 Grand Duke Ferdinando I of Tuscany hired the English Captain Robert Thornton to lead an expedition to the northern coast of South America. This was not a formal effort at colonization itself but rather more of a scouting assignment, a preliminary voyage with more to come later. This initial expedition was simply to explore the unclaimed area of what is today northern Brazil from the coast down to the Amazon River. If Captain Thornton found conditions suitable, the Grand Duchy of Tuscany would then send over settlers to establish a colony in the region from which to export the valuable Brazil wood back to Italy; which was highly in demand with all of the building projects then underway. The area in question is today part of the overseas department of French Guyana but, at the time, it was unclaimed territory. France would not establish a colony there until 1630. 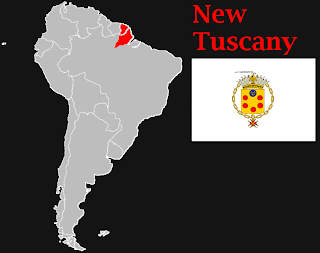 Captain Thornton set sail from Livorno in September of 1608 with two ships; a caravel and a smaller tartane, eventually reaching South America and exploring around the mouth of the Cayenne River. Their only means of finding the mouth of the Amazon was to sail south until the color of the water changed and began to grow less salty. However, they reached the general area they were aiming for, sailed along the coast and occasionally putting in to explore the land. During these expeditions they came across some South American natives but there does not seem to have been any major problems with them. Figuring that these people would be better able to attest to the quality of the region than he could, five or six natives were persuaded to accompany the Italian expedition back to Florence. Perhaps Captain Thornton felt some trepidation about what he would report to the Grand Duke about this land? For men used to the comfortable climate of Tuscany, the area around the Cayenne River must have felt like being in a broiler and, indeed, Spanish explorers had avoided the area because it was considered too hot and lacking in any obvious mineral wealth. When the great Italian explorer Christopher Columbus visited the area he dubbed it the “Land of pariahs”. Was this land promising as the future site of an Italian colonial empire in the Americas? 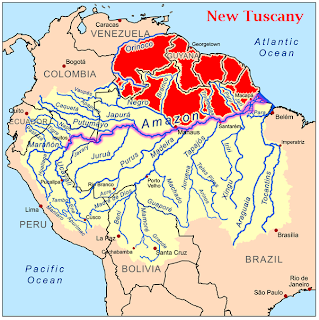 Certainly there was potential, even if it might not have been as obvious as in other areas. First and foremost, no other powers had yet claimed the region and, according to some sources, there was interest in perhaps laying claim to all the land between the Orinoco and Amazon Rivers for Tuscany which would have been a sizeable Italian land mass indeed. The climate, while not as comfortable as some would like, is certainly conducive to growing things and the river connections would have allowed for easy access to inland areas and facilitated in commerce. It would not have been easy but such ventures never are and there is no reason why it could not have been a success. Also, if the inland area could have been reached and Brazilian wood brought up via the river systems, there could have been an immediate return on investment just as the Grand Duke of Tuscany hoped. It also may have been good for the future stability of the region to have an Italian presence in South America rather than only the rival Spanish and Portuguese empires.

In any event, the voyage was a resounding success. After exploring the area, Captain Thornton returned to Tuscany with a report that listed the abundance of rosewood, wild sugar cane, white pepper, balsam, cotton and other valuable export items. Moreover the voyage was made from Italy to South America and back without the loss of a single man though, unfortunately, all but one of the natives brought back soon died of smallpox which they had never been exposed to. The natives did though attest to how rich and fertile the land was, making it sound as though they were trying to encourage colonization, even reporting that it was quite rich in silver and gold diposits. Everything seemed to be going great, the initial voyage was a success, all reports were glowing with promise and Captain Thornton was ready to sail back. According to the original plan, the next step was for a second voyage to establish the actual colony, somewhere between the Orinoco and Amazon Rivers, with Italian settlers from Livorno and Lucca which was to get underway in the summer of 1609. Unfortunately, despite everything going as planned and with every chance of success on the horizon, no follow-up voyage was to be made to establish an actual Italian colony. 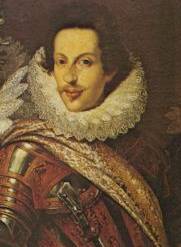 By the time Captain Thornton returned to Florence, Grand Duke Ferdinando I had passed away and his son, Grand Duke Cosimo II, had no interest in pursuing the Italian colonization of America. It may seem to some that Cosimo II de’ Medici had little interest in any official duties at all, delegating most of his authority to his ministers to govern Tuscany on their own. However, to be fair, this was mostly due to his very poor health and he did considerably enlarge the Florentine navy so he was not without concern for the future. However, the voyage of Captain Thornton would not be followed up and there would be no Italian colonization of the New World, at least not by an Italian state, and a “New Tuscany” in South America would remain in the realm of the imagination.
Posted by MadMonarchist at 4:24 PM