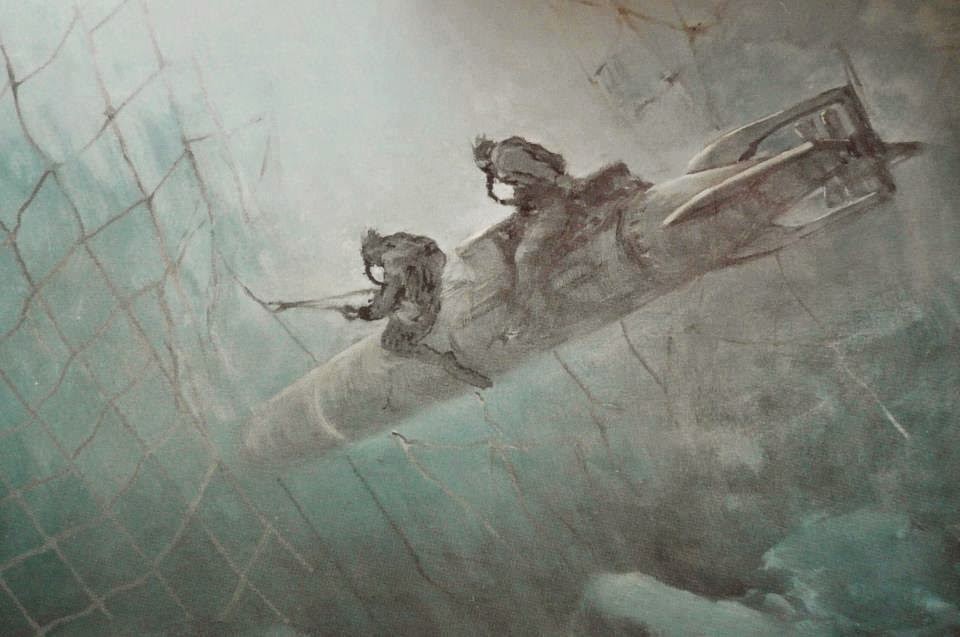 The Battle of Cheren 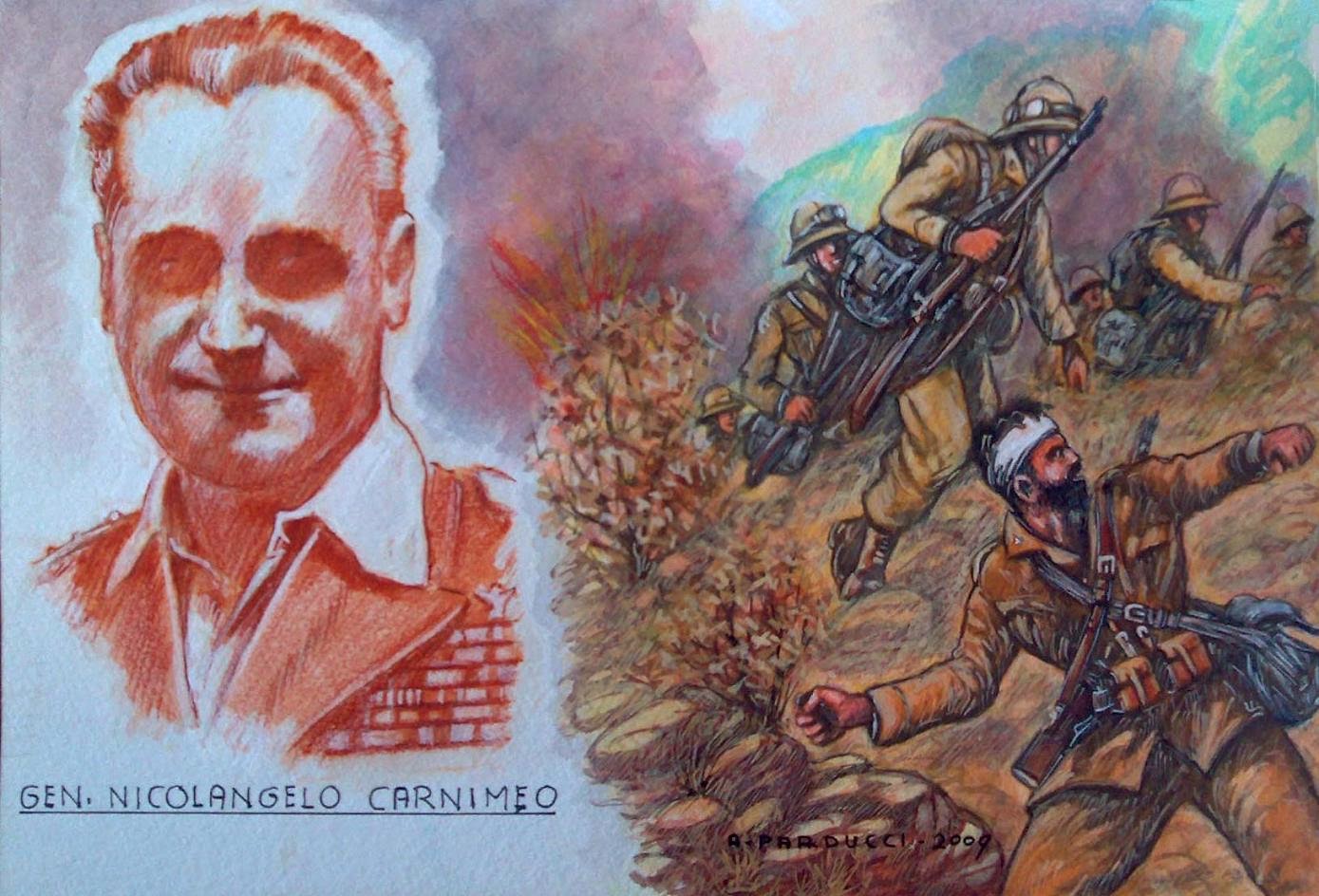 On February 5, 1941 the Battle of Cheren, Eritrea began when elements of the British Indian Army under Lt. General William Platt, advancing from the Sudan, clashed with the regular and colonial Italian forces under General Nicolangelo Carnimeo. The leading British unit, “Gazelle Force” of the 4th Indian Infantry Division under Colonel Frank Messervy came to the battle later than expected due to Italian forces blowing up bridges and obstructing the roads, buying precious time for reinforcements to arrive from Addis Ababa, including the Alpini battalion of the Savoy Grenadiers. The initial clash came when a regiment of Highlanders and a Punjab regiment attacked on the left side of Dongolaas Gorge, eventually seizing Brig’s Peak. However, a counter-attack by the Savoy Grenadiers drove them back and it was only with tenacious effort that they were able to hold on to their fall-back position on Cameron Ridge. The Italian forces kept up a heavy fire and persistent attacks on the British positions, stalemating the entire British advance in that area. Italian forces repelled other attacks as the British tried to find a weak point to exploit but it was to no avail. Hard pressed and running out of ammunition, after three days of hard fighting the British had to retreat back to their starting point. 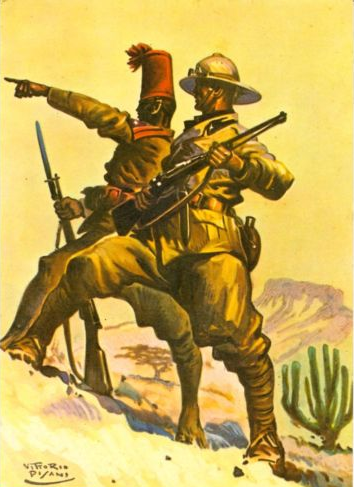 After a brief respite, another Punjab regiment (the first) attacked Brig’s Peak again, coming under heavy fire from the defending Italians. General Carnimeo had set up a deep defense that made excellent use of the terrain with its many layers of ridges. Once again, the Indian troops fought their way to the peak, pushing the Italian colonial forces back. However, by the time they reached that point, so many men had to be detailed to carry and secure supplies over the rugged terrain that few were left to defend the front line and, once again, a fierce attack by the Savoy Grenadiers reclaimed the peak and forced the Indians to retreat. As before, they fell back to what the British called Cameron Ridge and only with great difficulty managed to hold the line there against the charging Italian troops. Likewise, another attack was launched on Acqua Col, one of the areas they had been repulsed from before. The Italian soldiers defending Acqua Col endured heavy artillery fire before the Rajputs, Sikhs and other Indian troops came charging forward. It was a hard and desperate fight but the Italians would not be moved. Expected British reinforcements had to be diverted to keep the Italian forces from overrunning Cameron Ridge so that finally the attack on Acqua Col had to be abandoned.

The British had thrown everything they had at the Italians and displayed no shortage of valor but the Italian troops had thrown back each attack. General Platt finally decided to halt, reorganize his forces, wait for reinforcements and further train his troops for a more intricate plan of attack. For General Carnimeo, on the other hand, the 6th Colonial Brigade arrived to lend support as did the 11th MVSN Battalion but he did not have the seemingly endless logistical support available to the British. He could only deploy his men to best effect and make the British pay for every step forward they took. He had superiority in numbers but also much more ground to cover along with inferior weapons and equipment. As February turned to March, the British began to move, reinforced by more troops, including mobile machine gun companies and units of the Free French army. Platt planned a broad, coordinated offensive that would have to include attacking the only fortified strongpoint in the area, Fort Dologorodoc which prevented the British artillery from moving forward to support an attack Acqua Col. 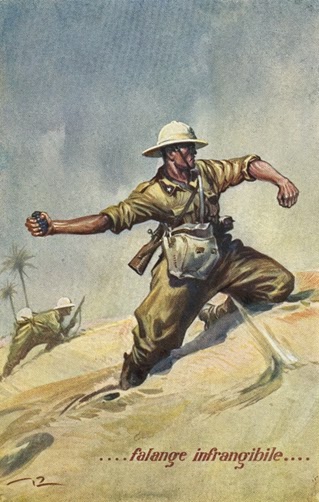 On March 15, 1941 the British assault began with Platt heading again for Sanchil, Brig’s Peak and then Hog’s Back and Mount Sammana. General Lewis Heath and Brigadier Messervy were to attack the fort. The Italians were resolutely determined to resist them and, at first, the Italian army repeated their past successes. Platt drove his men forward against the high ground from Cameron Ridge, took heavy losses but gained ground. Then the Italian troops counter-attacked and drove the Indians back. The bloody cycle went on all the rest of the day and into the night with losses mounting for both sides as the Italian and Indian troops fought back and forth, taking and retaking hill after hill. Italian troops were even more successful on the left (right from the British perspective) where the assault on Ft Dologorodoc by Highland light infantry was beaten back. Indian reinforcements likewise came under withering Italian fire and were pinned down, unable to advance or retreat. All they could do was stay under what cover they could find and wait until night fell when they were finally able to fall back under cover of darkness. The stalwart Italian troops had turned the first day of Platt’s operation into a bitter defeat for the British. However, the British were nothing if not persistent.

With the rising moon giving some visibility, the British renewed their attack on Ft Dologorodoc, taking two key approach points. When the Italian troops inside counter-attacked to drive them back, a West Yorkshire regiment crept up the rocky slopes and hit the fort from the other side. Only a skeleton force of the Italian garrison remained behind, fighting a desperate and bloody hand-to-hand battle for the strongpoint. However, after a great deal of fierce but gallant combat, they were overwhelmed and the fort was taken by the British as the new day began to dawn. Nearby Italian troops launched multiple counter-attacks to retake the fort but with supplies running low and the British holding the commanding position in the clear light of day, none were successful. Meanwhile, Platt and his attacks were less successful as their repeated advances failed to dislodge the Italian troops. Day after day they came forward, were repelled or made minimal gains only to face Italian counter-attacks that often ended, like the fighting in the fort, in brutal hand-to-hand combat. Platt finally decided he would have to find a new avenue of attack if he was going to have any success. 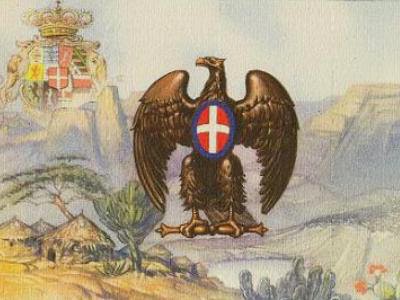 This took some time as his reconnaissance forces were chased away by heavy fire from the Italian lines even under cover of night. Still, they eventually found a more vulnerable gap (dubbed the “Railway Bumps”) which was attacked with British and Indian troops, the mobile machine gun companies and even 12 Matilda II infantry tanks against which the Italians had no defense whatsoever. The capture of the fort also meant that British artillery could devastate the Italian lines from almost any position. The Italian troops resisted fiercely but it finally became clear that the British had every advantage and any further combat would be to no avail. General Carnimeo ordered his men to begin falling back toward Asmara. Unfortunately, units of the Savoy Grenadiers and the Bersaglieri had been fighting so tenaciously that they had been completely surrounded and with the rest of the army pulling out, they had no choice but to surrender. Nonetheless, while the Battle of Cheren was a defeat for Italy, it was an honorable one. The Italian and colonial African forces had fought with incredible tenacity, skill and heroism. 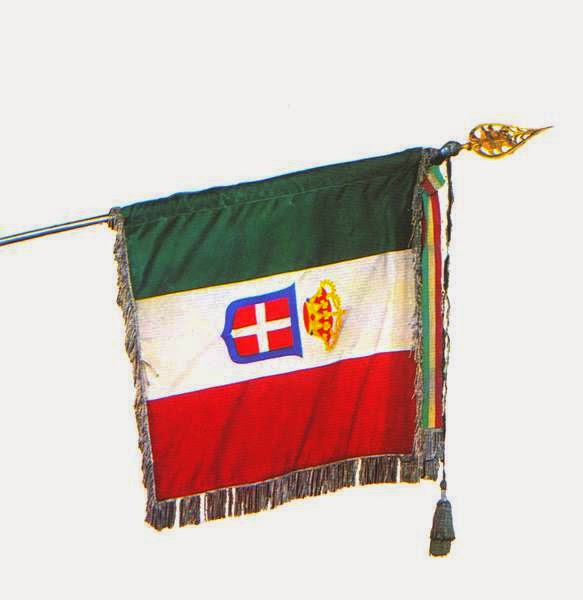 Their gallant defense earned them the battlefield respect of their British enemies with Compton Mackenzie writing about the ridiculous portrayal of Italian troops by Allied propagandists and how the Battle of Cheren proved them false said, “…except for the German parachute division in Italy and the Japanese in Burma no enemy with whom the British and Indian troops were matched put up a finer fight than those Savoia battalions at Keren. Moreover, the Colonial troops, until they cracked at the very end, fought with valour and resolution, and their staunchness was a testimony to the excellence of the Italian administration and military training in Eritrea.” It was a hard fought battle by two determined foes that could respect each other for the ability they displayed. It was a battle that should be long remembered in Italian military history and the annals of the Italian Royal Armed Forces of World War II.
Posted by MadMonarchist at 1:50 AM 1 comment: