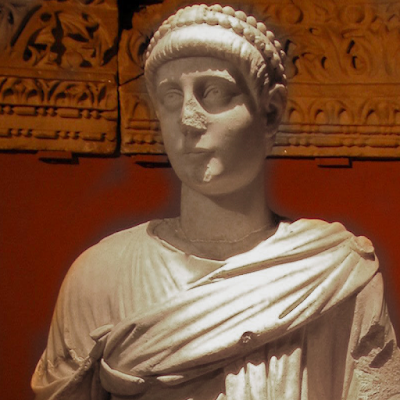 The history of the Roman imperial monarchy is complete with stories of every kind; dramatic, bizarre, occasionally comic and tragic. The story of Emperor Valentinian II is one of the tragic ones. To set the scene, a good place to establish the background of this unfortunate monarch is with the glorious reign of Emperor Constantine the Great. As most know, it was Emperor Constantine who reunited the Roman Empire under one emperor, built the second capital city of Constantinople, established a policy of religious freedom for Christians and who was, at the end of his life, the first Christian Emperor of Rome. He also established a dynasty that carried on into the 360’s with his last male descendant being Emperor Julian, better known as “Julian the Apostate” who tried to revert Rome back to paganism rather than Christianity. A new imperial dynasty was then established, in the west, by Emperor Valentinian I, a man who rose from humble origins in Pannonia in what is today Croatia. He was a staunch Christian, a military-minded man who established the Valentinian dynasty, ruling the west himself while his younger brother Valens ruled as Emperor of the East.

Valentinian I was succeeded by his son, Emperor Gratian, the man who would hand over the title of “Supreme Pontiff” to the Bishop of Rome. However, Emperor Gratian ruled only from 367 to 383 AD when he was assassinated at Lyons with most of the empire north of the Alps left in the hands of a renegade general named Magnus Maximus. However, he died in 388, a year after invading Italy. The young man who was in charge, or at least who was supposed to be, was Emperor Valentinian II. The son of Valentinian I by his second wife, Justina, he was only four years old when he came to the throne on November 22, 375 AD and had inherited a perilous position. The generals loyal to his father had proclaimed him emperor immediately upon the death of his father, taking no account of his half-brother Gratian or his uncle Valens. It is often assumed that the Frankish commander of the Roman forces in Pannonia, Merobaudes, intended to disregard Gratian, whom many in the military distrusted, in favor of Valentinian II who was, obviously, too young to rule and could not oppose them.

Emperor Gratian was thus left with what is now France, Britain and Spain while the nominal Emperor Valentinian II reigned over Italy, most of the Balkans and Africa. His imperial court was in Milan but tensions were thick. The most influential figure in his life was his mother Justina, an adherent of the Arian heresy, who clashed with the preeminent religious authority, St Ambrose, Bishop of Milan and prefect of Liguria and Emilia who was an adamant opponent of Arianism. This was a dangerous combination as the young Valentinian II became the pawn of those wishing to push their own agendas. Justina used his authority to try to suppress the orthodox Christians in favor of the Arians, though St Ambrose had the local populace on his side. Magnus Maximus, who was trying to claim the throne for himself, also used Arianism as his tool, casting himself as a champion of orthodoxy in order to take power from Valentinian II or, more precisely, those who ruled in his name. After Emperor Valens in the east came the reign of Emperor Theodosius the Great who was also opposed to Arianism and so would be of no help.

When Maximus crossed the Alps into Italy, Justina and the teenage Emperor Valentinian II fled to Thessalonica (Greece) from which they obtained the support of Emperor Theodosius to restore Valentinian II in the west by offering in marriage his sister Princess Galla. In 388 AD Emperor Theodosius dutifully launched a military campaign that saw Maximus defeated and Valentinian II restored and though he would begin to establish his own dynasty through his sons Arcadius and Honorius, Emperor Theodosius remained faithful to his agreement with the last of the Valentinian dynasty. However, the young monarch’s troubles were far from over. While Theodosius held court in Milan, Valentinian II was installed in Vienne (in France) with Emperor Theodosius acting as his guardian since Justina had died around 391. As the East Roman Emperor had plenty to keep himself busy, he delegated his duties as guardian to his Frankish general Arbogast.

Emperor Valentinian II occupied himself with peaceful pursuits in Vienne while Arbogast marched off to fight the Germans along the Rhine in his name. However, it was clear that Arbogast was the real ruler in the west, not Valentinian II who he jealously guarded. Though nominally answerable to Emperor Theodosius, it is likely that the Eastern Emperor would not have approved of his tyrannical treatment of Valentinian. Anyone who became too close to the isolated young man could be expected to meet an unhappy end, always with the justification that the person had been guilty of some crime. Harmonius, for example, was a friend of Valentinian who was murdered by Arbogast personally and in the presence of the young emperor himself. Arbogast justified this by asserting that Harmonius had been guilty of taking bribes, but then as now many suspected that he simply wished to keep Valentinian isolated and under his power.

All of this, naturally, greatly disturbed Valentinian who was, by then, certainly more than old enough to be ruling on his own without a “guardian”. He saw an opportunity when word came that barbarians were preparing to attack Italy. Valentinian II planned to lead an army into Italy himself, no doubt hoping that he could establish a source of military strength for himself that would enable him to stand on his own. However, Arbogast could see where that might lead as well as anyone and refused to allow the Emperor to leave. Valentinian II then attempted to simply dismiss Arbogast from imperial service but Arbogast openly defied him on the grounds that he had been appointed by Emperor Theodosius and Valentinian II had no authority to relieve him of his command. Emperor Valentinian II was still little more than a prisoner but did manage to write for help, appealing to St Ambrose in Milan and Emperor Theodosius that he was being overruled by a barbarian general. He also requested to get right with the Church and for St Ambrose to come to Vienne to baptize him in rejection of the Arianism of his mother.

However, none of that was to happen and it may be that Arbogast was informed of what had been written in those letters for on May 15, 392 Emperor Valentinian II was found dead, hanging in his palace in Vienne. He was only twenty-one years old. Arbogast said that he had committed suicide and certainly his life had been one to encourage depression and despair. However, many people, then as now, believe that Arbogast had the young emperor murdered, with many accepting this as a matter of fact. Given what he had just written to Theodosius and St Ambrose, it does seem that, while in despair, Valentinian still held out hope for redress of his situation. The timing of his sudden death certainly points to Arbogast being the guilty party. We also know that St Ambrose eulogized him and praised him highly as a virtuous, young monarch, a Christian Roman emperor who should be an example to others. It seems highly unlikely he would have done so if he had harbored any suspicion that the Emperor had killed himself.

So it was with that air of mystery and suspicion that the reign of Emperor Valentinian II came to an end. His body was carried, with full imperial Roman pomp and ceremony, to Milan where his remains were met by St Ambrose and his weeping sisters Justa and Grata. He was buried alongside Emperor Gratian in the Basilica of San Lorenzo. Arbogast, though first claiming to remain loyal to Theodosius by proclaiming his son Arcadius emperor, eventually set up his own puppet usurper in the person of Eugenius. Emperor Theodosius came west, defeated Eugenius and Arbogast and placed his son Honorius on the throne as Western Roman Emperor.

As for Emperor Valentinian II, his tragic death marked the end of his dynasty and its replacement with the Theodosian. His all too short life had been spent dominated by others, often treated as a rather well kept prisoner but thanks to St Ambrose, when he is remembered at all, he is generally remembered well, as a good-hearted young man who could have made for a great emperor if he had truly been given a chance. The account of St Ambrose is convincing given that he had no reason to distort the truth and would have gained nothing by it. During the young of Valentinian II, the two had often been at odds. Influenced by his Arian mother, orders given in his name were defied by St Ambrose and he also met Church opposition when Valentinian wished to preserve the monuments of pagan Rome, an act which caused the pagans to try to gain more, such as the restoration of the Altar of Victory in the Senate but to this Valentinian II could not agree. His eventual renunciation of Arianism seems to have been genuine and under different circumstances he may well have become one of the great lights in the twilight era of the Roman Empire. That he was not is unfortunate but, according to St Ambrose, he nonetheless set a worthy example in his own tragic life of strength of character in the face of great adversity.
Posted by MadMonarchist at 8:25 PM No comments: