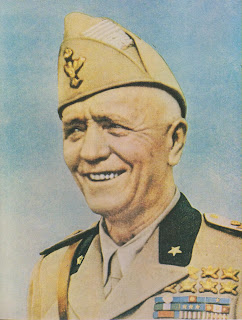 Marshal Badoglio, a significant figure in the military history of the Kingdom of Italy from the time of World War I until the end of World War II. His shifting loyalties have left him reviled by Communists as well as Fascists, by Italian patriots and the enemies of Italy and by republicans as well as monarchists. Certainly, others in history have been known for changing allegiance, fighting for one side and then later opposing it, but usually they were being loyal to some greater cause, some noble principle, even if evident only to themselves. In the case of Marshal Badoglio however, it is hard to see any motivation other than a self-serving effort to shift blame, avoid responsibility and survive the consequences of what were often his own mistakes. It is hard to imagine anyone rising so high in the military while being to a considerable extent responsible for one of the worst defeats in Italian history and then rising to the top political position in the country despite being out of favor with all the major parties and distrusted by the King. 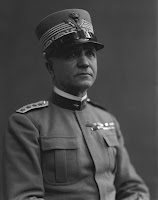 Pietro Badoglio was born in Grazzano Montferrat (later renamed Grazzano Badoglio) in Asti, Piedmont. He attended the military academy in Turin and joined the Royal Italian Army in 1892 as a lieutenant in the artillery, serving in Eritrea in 1896 and Libya in 1912. It was there that he first attracted the notice of his superiors for his meritorious service at the battle of Zanzur. He received a decoration for his service and a promotion to major. By the time Italy entered the First World War, Badoglio was a lieutenant colonel serving on the general staff of the Second Army with the Fourth Division. That unit was stationed in the Monte Sabotino sector, a bleak region that had been strongly fortified by the Austrians. Badoglio urged his superiors that Monte Sabotino be taken even though most considered the Austrian position impregnable. Badoglio, however, thought he had a better way. A frontal assault would have been all but suicidal so, instead, he proposed digging a network of tunnels underneath the Austrian lines and exploding them to disrupt their defensive line.

His plan approved, Badoglio was promoted to colonel while the engineers worked at digging the extensive tunnels as near as possible to the Austrian lines. In April of 1916, with Colonel Badoglio then serving as Chief of Staff of the Sixth Army Corps, the attack was made and was a stunning success with Monte Sabotino being taken by the Italians with only minimal losses. Because of this, by August he had been promoted to major general and he was later made Vice-Chief of Staff, widely believed to be because of the favor of General Luigi Capello who, like Badoglio, was a member of the Freemasons. By that time, Italian forces had suffered their worst defeat of the war at the Battle of Caporetto. The role that Badoglio played in this disaster is still a matter of some controversy, however, there is hardly any dispute that the commission charged with looking into the defeat after the war, to determine how such a thing could have happened, laid no small amount of blame at the feet of Badoglio. However, by the time the report was done, Mussolini was in charge and did not want any bad press for a top commander in the army and so mention of Badoglio was removed before the report was released.

In the end, this only served to tarnish his reputation further, perhaps even further than he deserved since most historians state that Badoglio was, otherwise, a competent staff officer. Still, it would not be the last time that his war record would be stained by controversy. He participated in the Italian delegation to the peace talks and served as Chief of Staff of the army from 1919 to 1921. Like some other officers, he tried to avoid politics in the turbulent years after the war and was not very supportive of the rising National Fascist Party. This stands out as there were many veterans in the ranks of the Black shirts and the Fascist message was tailor-made for many military veterans, decrying how, despite the sacrifice and heroism of the Italian soldiers, the promises Britain and France had made to them were not kept and that a stronger military was needed. Badoglio, however, tried to stay out of the turmoil and, at his request, was made Italian ambassador to Brazil until Mussolini requested his return to the post of Chief of Staff in 1925. He went along with the new government comfortably enough and the following year he was promoted to Marshal of Italy.

From 1928 to 1934 Badoglio served as Governor of Libya, taking harsh measures when necessary but requiring additional help to finally end rebellion in the colony. His greatest moment of triumph, but later more controversy, came when he was given command of the primary front in the war against Ethiopia. Mussolini had, at first, wanted the war to be a “Fascist war” with the bulk of the troops coming from his Black shirt militia and his senior Black shirt general, Emilio De Bono, in overall command. However, when De Bono proved too cautious and slow for Mussolini, he was promoted off the front line and Marshal Badoglio was called in to replace him. The Italian forces launched a renewed and more vigorous offensive which in 1936 culminated in the capture of the Ethiopian capital. Marshal Badoglio made a triumphant entry into the city and was quickly named the first Viceroy of Italian East Africa. Later, however, accusations of cruelty were made against the Marshal over the use of chemical weapons (poison gas) against the Ethiopians, in violation of the Geneva Convention. Blame for this is usually reserved for Mussolini but, according to some documents, Badoglio ordered the use of poison gas even before Mussolini himself had authorized it. 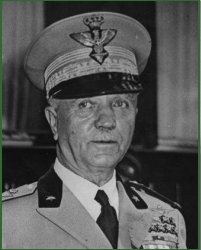 Mussolini grew to despise Badoglio more and more. He disliked having to share credit with him for the east African victory and he bristled when Badoglio advised against entering World War II, saying that the Italian army was not prepared for such a conflict, yet, at the same time, assuring the government that the Italian munitions industry was more advanced than that of the Germans. This prevarication, combined with hesitation over military policy while refusing to resign (he received the highest salary of any official at his level) earned him the wrath of Mussolini who still did not hesitate to blame Badoglio for never informing him of the true state of affairs after he plunged Italy into war while seldom seeking and never taking the advice of his Chief of Staff. Yet, there is evidence that it was Badoglio himself who proposed Mussolini being given direct command of the armed forces, perhaps in an effort to wash his hands of any responsibility. Similarly, Badoglio claimed that he advised against the invasion of Greece while other evidence indicates that he endorsed the decision with no objections. When things went wrong, Badoglio disavowed any connection with the campaign and after Fascist papers began to blame the Chief of Staff for the numerous setbacks, he finally resigned his position.

Marshal Badoglio remained quiet for a time until things began to go badly for Italy and many, even in the upper ranks of the Fascist Party, began to talk about the need to get rid of Mussolini and extricate Italy from a losing war. Badoglio began to involve himself in these talks and did not always show a great deal of loyalty, once boasting that at any given time he could overthrow Mussolini and even the monarchy if he so desired. In 1943 a majority of the leaders on the Fascist Grand Council decided that Mussolini had to go and the King was able to move against the doomed dictator. It retrospect, it is easy to wonder why Badoglio ended up being the man to replace the Duce when he was so disliked by the Fascist hierarchy and somewhat distrusted at court. The simple answer is that there seemed to be no better possible options. Badoglio had the reputation to command the army while not being tainted by recent setbacks. As a Piedmontese officer, royalists expected him to be loyal and he had distanced himself enough from the Fascists that the Allies could be expected to deal with him. 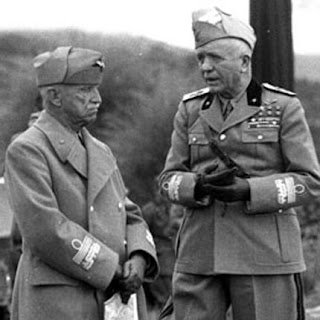 On July 25, 1943 the King dismissed Mussolini and Marshal Badoglio was appointed Prime Minister. However, there was immediate confusion as the Marshal addressed the people by telling them that the war would go on and that nothing had really changed. He told the Germans that Italy was still totally committed to the Axis while opening secret negotiations with the Allies at the same time. In September Badoglio signed an armistice with the Allies but failed to give any prior notice of this to the Italian armed forces, leaving many wondering if the news was genuine and many more cut off on foreign battlefields at the mercy of the Germans. Italy was forced to surrender unconditionally, a sore point for the King who had hoped that Italy would retain her colonies acquired prior to 1922 and maintain her territorial integrity. That would not be the case nor would the Allies commit to the maintenance of the monarchy. Even after Italy joined the Allied war effort under Badoglio this remained a point of contention. Some suggested that the King and Prince Umberto of Piedmont should abdicate their rights in favor of the young Prince Victor Emmanuel whom Badoglio would act for as regent. Badoglio, of course, favored this option but the King regarded this as almost an act of betrayal. He was also very displeased with the radical political figures Badoglio was dealing with to form a post-war government after the end of martial law.

The whole affair was badly handled and ended with the King and Badoglio being forced to leave Rome which was thereafter occupied by the Germans while the Allies fought their way up the Italian peninsula. In 1944 the increased opposition finally forced Badoglio to step aside in favor of a more leftist government. Some, particularly the Ethiopians, wished to see him tried for war crimes but by shifting to the Allied side Badoglio had ensured that he would be saved such a fate. He died on November 1, 1956 in Grazzano Badoglio at the age of 85.

Posted by MadMonarchist at 7:48 AM