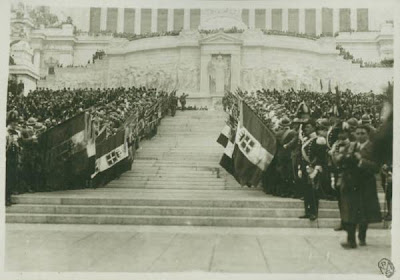 It was on this day in 1921 that the unknown Italian soldier of the First World War was buried, with an eternal flame, at the King Vittorio Emanuele II Monument in Rome. Alberto Sparapani designed the tomb after a campaign to honor the 'unknown soldier' was made by Italian veterans of the Great War and by other Allied veterans, after Great Britain and France had done the same. The United States of America awarded the Congressional Medal of Honor of the Italian unknown soldier shortly before they took the step of honoring the unknown American soldier. The Kingdom of Italy lost over a million people, soldiers and civilians, in the First World War, more than the British Empire, less than France or Russia and less than any of the Central Powers other than Bulgaria. About 650,000 Italian soldiers died in the conflict. Some Italian soldiers had voluntarily joined the war prior to the declaration of war by serving with the French Foreign Legion, later Italian forces served on almost every major front of the war. Some served on the western front, others in Albania and Macedonia, in Libya and Somalia, in the Middle East and, of course, the primary front against the Germans and Austrians on the northeast border. 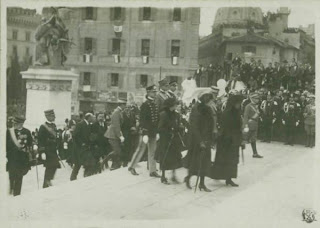 To honor the sacrifices of these men, Colonel Giulio Douhet, writing in "Dovere" recommended entombing the body of an unknown Italian soldier to symbolize all of those whose names are not recorded, who died for their King and homeland. The Commissione Nazionale per le Onoranze ai Militari d'Italia was established which would eventually see this goal carried out with the unknown Italian soldier entombed in the Altar of the Fatherland in Rome. The government proposed and King Vittorio Emanuele III approved a bill on August 11, 1921 to find the Italian warrior who would represent all at the monument. Eleven bodies were found and taken to the Basilica of Aquileia on October 27, 1921 and one of these was chosen by a simple woman, Maria Bergamas of Trieste, who was the mother of an army lieutenant killed on Mount Gimone, to have the honor of representing his comrades. With all due ceremony the coffin of the unknown soldier was taken to a special train and journeyed through Udine, Venice, Bologna, Florence and finally Rome where the coffin was carried from the train station by veterans who had earned the Gold Medal for Military Valor in the late war. A special memorial service was held at the Basilica of Santa Maria degli Angeli and on November 4, 1921 the remains were transferred to the Piazza Venezia and then finally entombed. 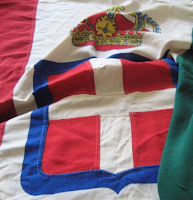 The date was chosen to coincide with the Day of National Unity and the Armed Forces, a day first set aside to mark the end of the First World War and which is the only national holiday from the era of the Kingdom of Italy to survive the destruction of the monarchy by the republic. On the day that the unknown soldier was laid to rest, King Vittorio Emanuele III was noticed to have tears in his eyes and suppressed his emotions only with difficulty as he stepped forward to bestow the Gold Medal on the deceased warrior, representing all of those who had fought with courage and heroism, anonymously enduring hardship and privation for their King and fatherland.
Posted by MadMonarchist at 9:48 AM