It was on this day in 1940 that the town of Hargeisa in British Somaliland was captured by Italian forces in a combined infantry and tank assault after a three-hour artillery bombardment. This was part of a major Italian offensive in the Horn of Africa which ultimately secured the whole region for the Kingdom of Italy. Lieutenant General Carlo De Simone, commanding the center column of the offensive under the overall command of HRH the Duke of Aosta, led the Italian forces in the attack on Hargeisa which was defended by two battalions of British imperial troops from India and British East Africa as well as elements of the Somali Camel Corps. Two days earlier General De Simone had crossed the British Somaliland border from Italian East Africa (Empire of Ethiopia) with twelve battalions of Eritrean colonial troops and four MVSN battalions. Because Italian East Africa was cut off and surrounded by British territory, everyone knew that they would have to conquer British Somaliland very quickly and even then, it would be long odds to hold the region in the face of the larger counter-offensive everyone expected.

In preparing for the attack, General De Simone addressed the Bersaglieri motorcycle troops (himself being a former Bersaglieri regimental commander) saying, “Your task is to be the vanguard, an arduous and difficult work which I know you will carry out to your uttermost. Our end is to reach Berbera [referring to the British port on the coast] and reach it we will”. After the artillery shelled the town the Italian forces advanced but found that the defending British Indian and African troops had little stomach for fighting. Though some tried to put up a fight, most simply retreated and in the ensuing campaign the British imperial forces simply retreated until they reached the coast where they were picked up by the Royal Navy and taken over to the safety of the Arabian peninsula. The British government had not been very generous when it came to military spending in British Somaliland and most considered the cause all but lost as soon as the pro-Allied governor of French Somaliland (Djibouti), General Legentilhomme, was replaced by General Germain. In other areas the Italian forces occupied border outposts in British territory in the Sudan and Kenya. In fact, Italian forces waged quite a brilliant irregular warfare campaign in northern Kenya for some time but the Italian forces were hampered in taking any major offensive action due to a lack of fuel caused by being cut off from the rest of Italian imperial territory and blockaded from the coast by the Royal Navy. 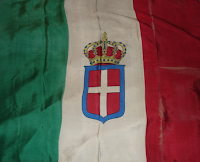 Still, on this day in 1940, an opening victory was won by the Royal Italian forces in a campaign that was a complete success, setting the scene with the Italian troops marching into Hargeisa to raise the Savoy tricolor flag.
Posted by MadMonarchist at 1:07 AM