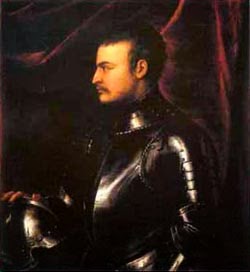 Lodovico de Medici, better known as Giovanni dalle Bande Nere, was a condottiero, one of the most inspiring figures in Italian military history and a central character in one of the most overlooked efforts to reunite the Italian peninsula. He was born on April 5, 1498 in Forlì to Giovanni de' Medici, "il Popolano" and the strong, captivating Caterina Sforza (natural daughter of the Duke of Milan). In his youth, he was rather wild but showed natural talent as a horseman and swordsman. He first became a professional condottiero working for another member of the Medici family, Pope Leo X. He led the fight against the Rovere Duke of Urbino, forming his own company of irregular light cavalry that specialized in raids and surprise attacks. He won numerous victories and soon established himself as one of the most famous soldiers in Italy at the time. Later, in 1521 he also took part in the war with France for Milan, Parma and Piacenza after Pope Leo X formed an alliance with the German Emperor and King of Spain Charles V. Again, he covered himself in glory winning such victories over the French as at Vaprio d'Adda. When Pope Leo X died, he added black stripes or bands to his arms as a sign of mourning and from that gained his nickname, Giovanni dalle Bande Nere ("Giovanni of the Black Bands").

The Germans recognized his talent and sought his services for themselves in 1523. While fighting for the Imperial Army, Giovanni dalle Bande Nere defeated the French and the Swiss at Caprino Bergamasco. However, the situation changed when another Medici was elected to the papal throne; Pope Clement VII. He bought the services of Giovanni dalle Bande Nere and ordered him to switch sides and fight for the King of France against the German Emperor and King of Spain. He did so but was not present at the critical battle of Pavia where the French were defeated and their King Francis I was captured. We can only speculate if his presence might have caused things to unfold differently. As it happened, Emperor Charles V gained a commanding position in Italy and Pope Clement VII only became more and more alarmed that Italy and with it the heart of the Catholic Church would be powerless before the Spanish-German might of Charles V. Finally, he determined that the German presence had to be removed and began trying to unite all the states of Italy together in common cause. It was a desperate gamble but many patriots greeted it with enthusiasm. Giammatteo Giberti said, "This war is not for a point of honor, or for a vendetta, or for the occupation of a city: this war concerns the well-being, or the eternal servitude of all Italy". The military theorist Machiavelli wrote to the Curia, "For the love of God, do not allow this chance to slip by," as he hoped to form an Italian national militia to resist the German-Spanish invasion that would bind all Italians together by blood. 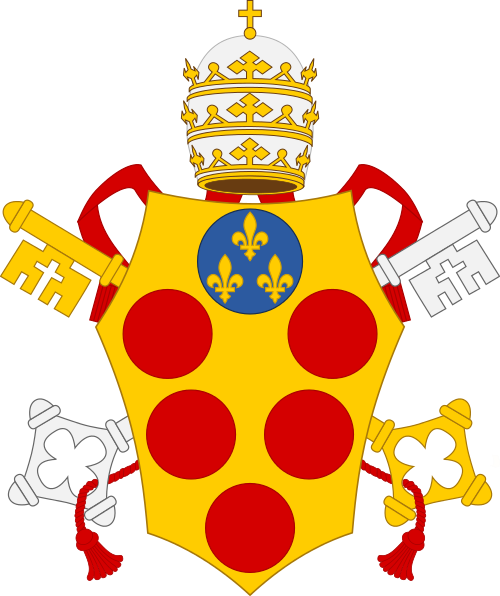 That was not to be, but the campaign went ahead, though Pope Clement VII insisted on a last attempt at peace. It came to nothing as did the Emperor's own proposal and soon the Pope was thrust into the position of leadership for the struggle for the national liberation of Italy as the war began in 1526. Unfortunately, real cooperation was hard to find, despite the stirring words of 'banishing the barbarian' from Italian soil for good. The Pope appointed the Duke of Urbino as his army commander, but the Duke stood by while Milan was savaged and then the Colonna rose up in Rome and attacked the Pope in alliance with the Emperor, forcing him to halt the papal forces for a short time. Yet, all the while, Giovanni and his men gave all Italians reason to hope as his forces harassed the enemy every step of the way, even defeating the fierce German Landsknecht reargiard at the Po River. He alone seemed to possess the skill and the determination to win over the German Imperial Army and his success would have meant a triumph that could have reunited the Italian peninsula under the Medici banner and the Keys of St Peter. However, on November 25, 1526 Giovanni was wounded by a lucky shot from a falconet near Governolo. Surgery was performed but it was no use and he died of his wounds on November 30, 1526.

With his death, resistance collapsed and things might have gone very different had he not been killed. The horrific Sack of Rome might not have occurred and a new era of Italian unity might have been achieved, a revived Roman Empire of competitive cities, working together in common cause with the Papal blessing, bringing all of their talents together. As it was though, Giovanni dalle Bande Nere left behind a legacy of martial valor but also something more tangible. Before his death, Giovanni had married Maria Salviati who gave birth to his son Cosimo who went on to become the second Duke of Florence and later Grand Duke Cosimo I of Tuscany, himself a giant figure in Italian history.
Posted by MadMonarchist at 11:51 PM