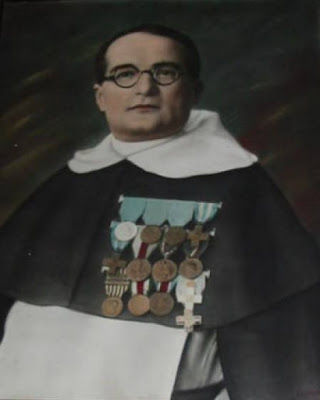 During most of the history of the Kingdom of Italy, the so-called “Roman Question” proved a source of division and heartache for the Italian people. The Roman Catholic Church, to which the vast majority of Italians belonged, refused to recognize the Kingdom of Italy, a united, Italian nation-state, due primarily to the loss, to such state, of the temporal territory of the Papacy. This stand-off was not ended until the signing of the Lateran Accords by Pope Pius XI and the government of Benito Mussolini in 1929. However, long before that, from the very beginning in fact of the creation of the Kingdom of Italy, there were those within the Catholic Church who maintained that one could be in obedience to the Roman Pontiff as well as a patriotic Italian and that to be a devout Catholic and to be a patriotic Italian who supported his country were not mutually exclusive concepts. One such individual, and certainly one of the most famous, was Father Reginaldo Giuliani, a Dominican friar who endeavored to serve God while also having very explicit political views about the Italian nation. 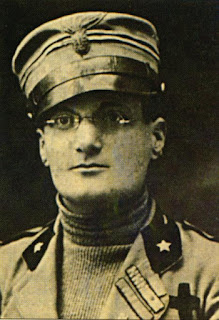 Father Giuliani was born in Turin on August 28, 1887 and first came to public attention during World War I. Not only did he join the Italian Royal Army as a field chaplain when Italy entered the First World War but he went even further and joined the Arditi, the elite assault troops who served as trench raiding parties and the spearhead of major offensives. These were the troops who were given especially rigorous training, to use a variety of weapons and for hand-to-hand combat as well as to have, because their mission was such an especially dangerous one, to have an utter fearlessness that engendered a total, almost mocking, contempt for death. Father Giuliani was right alongside his comrades as they stormed enemy trenches, fought in the most fierce battles and under the most strenuous conditions. He did not shirk his duties and during the course of the Great War gained notice for his bravery and gallantry, earning two bronze medals and two silver medals for military valor. He was devoted to his country, his comrades and what they all felt they were fighting for in those dark days. As such, like many other war veterans, he shared their view that when the time came for the peace settlement at the end of the war, that Italy had been cheated of all that the other Allies had promised to induce Italy to join the war in the stressful days of 1915.

Many of these war veterans tried to take it upon themselves to redress this injustice on their own by seizing on a particular port city and, by taking it, hopefully forcing the Italian government to take action in favor of their cause. This was the famous seizure of Fiume or ‘Fiume Exploit’, on the Dalmatian coast, led by the poet and war veteran Gabriele d’Annunzio. This was an historically Italian city (a long-time outpost of Venice) that had been part of Austria-Hungary during the war but which afterward was to be handed over to the newly contrived Kingdom of Yugoslavia rather than the Kingdom of Italy. Father Giuliani was part of this effort with what was called the “Catholic Legionnaires”. These men and the other legionnaires declared an Italian regency over the port which the international community tried to side-step by declaring it a “free city” that would belong to neither Italy nor Yugoslavia. The Italian Royal Navy moved in to end the regency by force in 1920, however, the enterprise made such an impression that several years later Fiume was finally annexed to the Kingdom of Italy. 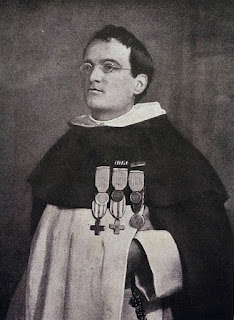 In the immediate aftermath, however, many of the supporters of Gabriele d’Annunzio and more broadly of a dynamic sort of nationalism fused with a new social-economic model known as corporatism found a home in the emerging Fascist movement of Benito Mussolini. Once again, yes, Father Giuliani was alongside many of his fellow Arditi war veterans in the Fascist black-shirt squads. In 1921 when Mussolini made his bid for power with the Fascist “March on Rome”, Father Giuliani was a participant, black shirt, war medals and crucifix together. This culminated with the failure of the liberal political establishment and King Vittorio Emanuele III inviting Mussolini to form a government. This the Duce of Fascism duly did and after an election gave him a large popular mandate, the old liberal political system was replaced by Mussolini’s Fascist dictatorship. Father Giuliani, during these years, took the time to write an account of his harrowing experiences in the First World War with the Italian Third Army assault troops, producing a book called simply, “The Arditi” in 1926.

Over the next ten years, Father Giuliani did not have so high a profile. The Fascist regime busied itself with domestic issues dealing with the economy, industrial production, agricultural production, improvement of the national infrastructure and so on while Father Giuliani, of course, had his religious duties to attend to. However, he came back to prominence again with the outbreak of war with Ethiopia. Father Giuliani was an outspoken supporter of the war feeling that it was not only justified by the Ethiopian attack but hailing it as a Catholic crusade against heretics (presumably referring to the Copts) and heathens (presumably referring to the animists) to spread Roman civilization in eastern Africa. Once again, Father Giuliani rushed to the colors to enlist with the Royal Army as a field chaplain. He was assigned to the Eritrean Corps with the MVSN division of General Filippo Diamanti. Father Giuliani had lost none of his tenacity or courage and was persistently at the front with the troops. Finally, however, he paid the price when he was killed in action at the Battle of Warieu Pass (or Second Battle of Tembien). Father Giuliani was cut down by Ethiopian warriors while trying to come to the aid of wounded Italian soldiers. For his heroism and self-sacrifice he was posthumously awarded the gold medal for military valor. 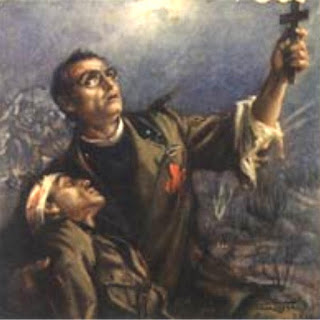 Father Reginaldo Giuliani, already something of a hero in Italy, became a national martyr with his death in Africa. The following year, his letters from the front were collected and put into a book titled “The Cross and Sword”. This was likely a reference to the citation for his gold medal which read, “A blow of a scimitar, brandished by a barbarian hand, cut short his terrestrial existence: ending the life of an apostle and beginning that of a martyr”. More than a dozen Italian towns and cities have squares or some monument in his honor and in 1939 a Liuzzi-class submarine of the Royal Navy was named after him. The famous Italian war film, “The Man with a Cross” by Roberto Rossellini about an Italian chaplain on the Russian front was based on his example. At the time of his death, and in the immediate aftermath, Father Giuliani was held up as the epitome of the pious patriot, the ideal Catholic Italian cleric. Under other circumstances, someone with so high a profile with such a life would likely have a cause for their canonization underway but, given the political views of Father Giuliani, that would be unthinkable these days.
Posted by MadMonarchist at 3:08 PM