Birth (or Rebirth) of the Kingdom of Italy 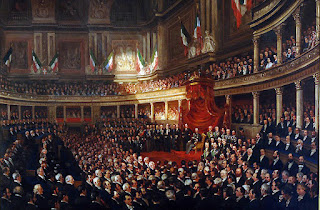 It was on this day in 1861 that the first Italian parliament, assembled in Turin, proclaimed the birth of the Kingdom of Italy, the united country as we know it today (though sadly now as a top-heavy, lower tier republic). The timing of this momentous occasion was quite conservative. With revolutions, a declaration of independence or proclamation of a new country generally comes before such a thing is an actual reality, while the struggle is still in progress. With the Kingdom of Italy, however, this was not the case. By the time HM King Vittorio Emanuele II assembled the first Italian parliament in Turin, the Austrians had been expelled from Italian soil everywhere except for the area around Venice, Garibaldi's victorious campaign had united the south with the north, finished off by the final victory by King Vittorio Emanuele's forces at the siege of Gaeta so that, other than Venice, the only other major Italian city that remained out of reach was Rome itself. The Eternal City was then still under the rule of Pope Pius IX, propped up by a French army sent by Emperor Napoleon III. As such, the proclamation of the Kingdom of Italy was the recognition of an established fact. The further designation of Rome as the capital city, despite it being under papal rather than Italian national control, was a hopeful expectation. 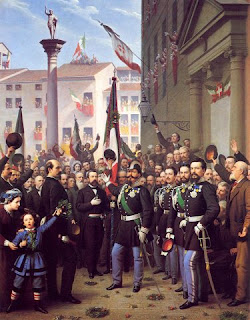 Nonetheless, with the notable exceptions of Rome and Venice, Italy was at last one united nation under one government for the first time since the fall of the Roman Empire. It was the culmination of a long struggle that Italian nationalists had been waging to take back control of their own destiny and once again become more than a battleground for foreign powers to fight over. It was a long time coming and might have come about in a number of ways. There were certainly better ways in which it could have happened but none of those came to be. However, that it finally happened at all was thanks to the monarchist faction and that is a truth that should not be ignored. The republicans under Mazzini had tried to do things their own way and had failed completely. Even Garibaldi, a republican by inclination, was obliged to accept that Italy could be united only by the monarchy. It is something to be thankful for that men such as the future prime minister Francesco Crispi were sufficiently nationalist to put the ultimate aim of national unity and national greatness above their own previous political opinions. As Crispi himself said, the monarchy unites while the republic divides. It was true then and it is true now. Hopefully the day will come when the Kingdom of Italy, proclaimed on this day in 1861, can be restored as a fully Italian, Catholic monarchy which can regain its place as a major player on the world stage.
Posted by MadMonarchist at 8:47 AM

Email ThisBlogThis!Share to TwitterShare to FacebookShare to Pinterest
Labels: anniversary