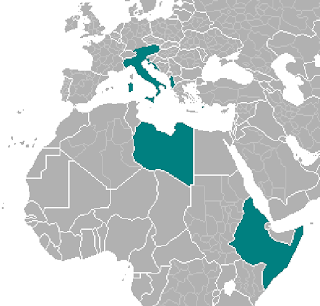 The map shown may look unusual, but there is at least a possibility that something near to that might have become a reality after the start of World War II. Although already allied with Germany, the Kingdom of Italy remained neutral when the conflict first broke out. Italy had not been attacked (yet) and the Italian armed forces were still recovering from successive military campaigns in Ethiopia, Spain and Albania. The Allies, of course, were eager to break Italy away from Germany and have her join the war on their side. Not for the first time they were a day late and a dollar short. Italy had been the first to take action to prevent the German annexation of Austria but was alarmed when France and Britain did nothing to support her. This alarm grew to anger when the League of Nations, with Britain and France leading the way, imposed sanctions on Italy over the war with Ethiopia. Germany did not join in the sanctions and since Britain and France had offered no help in containing Germany, Mussolini secured his northern border by making an alliance with the Germans. When the Allies belatedly tried to enlist Mussolini's support for stopping the Germans they did so while sanctions were still in place on Italy -obviously not a good environment for obtaining Italian sympathy.

Once again, after World War II began, the Allies approached Italy with big promises if she would abandon Germany and switch sides to join the Allies. They promised that when the war was over and Germany destroyed that Italy would be ceded the Tyrol, all of Austria, parts of southern Bavaria and that they would make good on the territorial promises which were made to Italy during the First World War but which were never delivered. We can assume roughly that this meant the Litoral region and Dalmatia at least. However, as we know, Mussolini did not accept the offer saying, "The Italy of 1940 is not the Italy of 1914. We've heard that story before, much to our regret. Why should we believe you now?" This was obviously a reference to what had happened in the First World War when Italy, previously allied to Germany and Austria, was persuaded by the Allies to come into the war on their side against the Austro-Germans with promises of extensive territories in the Tyrol, the Adriatic coast and a share of captured German colonies in Africa. After years of hard fighting and the loss of hundreds of thousands of men only a small portion of these grand promises were actually kept. As such, Italy took the attitude that, 'fool me once, shame on you; fool me twice, shame on me'.

After this offer was refused the Allies put new sanctions on Italy in an effort to hamper her military preparations, stopping Italian ships at sea carrying raw materials from Germany even though Italy was still a neutral power. Mussolini regarded this as an act of aggression and, as we know, Italy soon joined the war against the Allies, ultimately to her great misfortune.
Posted by MadMonarchist at 9:41 PM