The Tea Party in Italy 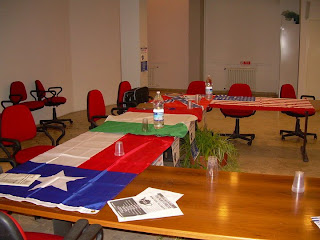 So, not long ago it was brought to my attention that there is a (small but fervent) “Tea Party” in, of all places, the Republic of Italy. This caught my interest immediately, both because Italy would be one of the last places I would have expected such a group to exist and because I have a (many would say unhealthy) fascination with the libertarian crowd who are probably, I would say, the real backbone of any coherent message the Tea Party might have. I know, many people are scared of libertarianism (many readers here are I know) but, as I have talked about before, libertarianism always seemed to me to have something rather medieval about it and, all in all, I find the high middle ages pretty tough to beat. Anyway, who would have expected to see a Tea Party in modern Italy of all places? I had heard, of course, of some likeminded groups in the United Kingdom which would seem to make more sense than in non-English-speaking countries. Well, that is to say, as much sense as one could expect from British people supporting a group of conservatives and libertarians who took the name of their movement from an attack on a British company but, there’s no need to go into that. 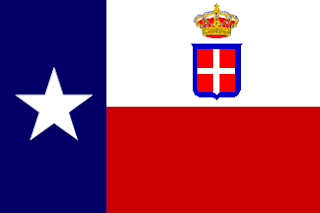 Pointed toward the face book page for the Italian Tea Party, I must admit I was surprised to see so many American flags on display. I was downright stunned to see a Confederate flag on display (causing me to question whether Italians are aware of the connotations it has on this side of the pond) but in all honesty I could not help but feel a slight surge of pride to see the Texas flag displayed as well. Okay, admittedly, when it comes to Texas and Texans our pride surges fairly easily but they didn’t choose the Massachusetts flag, the South Carolina flag or the Idaho flag did they? Nope, it was the Lone Star of Texas and so that may have made me a bit partial even at first glance. In all seriousness though, I was in fact a bit troubled by how lonely the Italian tricolor looked amongst this rather American-dominated vexillogical display. I was also struck by how plain and empty the solitary Italian tricolor looked without the Savoy royal crest in the center. Surely an Italian Tea Party would be supporters of the old Kingdom of Italy and their former Royal Family?

I know many people at this point will be wondering how I could ask such a question. Libertarians, by and large, are not known for their monarchist sympathies. In America of course they have led the way in the revival of bashing poor old King George III and cheering American Revolutionary republicanism. “The Founders” are sacrosanct to most of them. However, when I was first told that there was a Tea Party in Italy, or as it was put to me, that there were actually libertarians in Italy, the first thought that occurred to me was that these people must surely be ardent admirers of the House of Savoy. After all, more often than not, the one thing more than any other that the Savoy monarchy is often attacked for is exactly what most hard-core libertarians uphold as the greatest virtue: self-interest. Since this is something the House of Savoy has long been accused of, I naturally assumed libertarians would salute them on the same basis. Now, perhaps I have more of a libertarian streak than I would like to admit but I never really understood the outrage directed at the Italian monarchy on the basis of acting in their own self-interest. 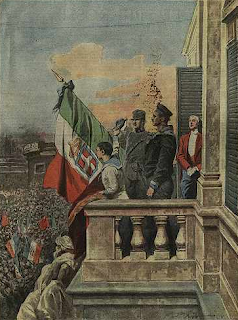 Usually, in my experience, this often involves the Italian participation in World War I which was around the time that Italian political leaders first began to toss around the phrase “sacred egotism” or ‘sacred self-interest’. The self-righteous attitude adopted by many toward the Kingdom of Italy in this regard, frankly always stunk of rank hypocrisy to me. After all, how many nations involved in World War I were not motivated by self-interest? Belgium was not certainly but who else? Perhaps Russia, certainly as concerns the Russian Empire it did not turn out to be in the interests of Russia to charge into war on behalf of Serbia. But Austria-Hungary, Germany, France, Great Britain, Ottoman Turkey, Japan etc all had self-interested reasons for getting involved. And, again, I am not criticizing them for that in and of itself. Do we not expect governments to act in the best interests of their people? Perhaps the Italians were simply a little more honest about it. I never understood why the Kingdom of Italy was so often criticized for her territorial demands by countries who gained far, far more vast territorial concessions out of the conflict. It does not seem dastardly to me for a country that makes the supreme sacrifice of war to expect to have something to show for it when it is over. Great Britain and France added greatly to their colonial empires by the war and the Royal Houses of Serbia and Romania each gained far more territory from the conflict than Italy did despite the fact that each were conquered by the Central Powers during the course of it.

Whenever someone ridicules the House of Savoy for always acting only in their own best interests, surely Italian libertarians should join the monarchists in leaping to their defense. Of course, when this attack is usually made, it is divorced from the nation at large; that is to say, the Savoy kings are usually accused of acting in the interests of the monarchy and their dynasty rather than the nation as a whole. I would say that is untrue simply as it stands, however, a case could be made that many countries would have been better off if their monarchs had followed their own self-interest rather than listening to what was advocated as the “greater good”. After all, King Louis XVI of France had great reservations about intervening in the American War for Independence because he feared that it would encourage revolution against his own monarchy by aiding the enemies of another. However, his advisors convinced him that it would be in the best interests of France to see Great Britain humbled in North America. That ultimately didn’t work out well for the Bourbon monarchy or France as a whole which got the Revolution, the Reign of Terror and all the rest. German Kaiser Wilhelm II had similar reservations about helping Lenin get back to Russia, fearing that communist revolution could spread to Germany and threaten the House of Hohenzollern if it gained a foothold in Russia. For similar reasons he was prevailed upon that it would be better for Germany to get Russia out of the war no matter the method. Well, Germany lost the war anyway and the Kaiser lost his throne in the process. 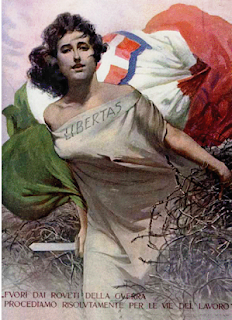 There was also a time when the Savoy monarchy was criticized in the same way for being champions of free trade, something else prized by most libertarians, doing business with countries others thought should be off-limits. The first minister of the first King of Italy was well known for his acceptance of the profit motive and his pragmatic saying that, “Free institutions tend to make people richer” and that his efforts were not about destroying the old order at all. Cavour tried to reassure the class that had, over great periods of time, risen to the top by saying, “You will see gentlemen, how reforms carried out in time, instead of weakening authority, reinforce it; instead of precipitating revolution, they prevent it.” Indeed, one could look back all the way to Renaissance Italy and see in the incredible success of the city-states such as Genoa and Venice a clear example of the profit motive at work. How else could one perpetually flooded city founded by refugees rise to become the dominant economic and naval power of the eastern Mediterranean? What else made Genoa the economic center of western Europe? Italian Tea Party members of all people should recognize that profit is not a dirty word nor is acting in your own self-interest inherently wicked. They probably already do but they should apply those principles to the republic vs. monarchy debate as well.

Tea Party supporters and libertarians tend to be zealous individualists and this was precisely the argument used by HM King Victor Emmanuel III in denouncing the idea of republicanism. The Italians, he said, were too individualistic for republicanism to ever be successful in Italy. Yet, many libertarians and certainly most Tea Party people seem to think that republicanism is the only way. This, as we have pointed out before here, is quite absurd when one gives it more than a second of thought. Why should the benefits of private ownership over public ownership apply to everything except the highest office in the land? If the individual always does better than the collective, why do so many still insist on collectivism rather than individualism when it comes to the sovereign? If a parcel of land becomes worthless under public ownership but becomes profitable under private ownership, the same rule should apply for the country as a whole.

When a King does what is in his own best interests the country naturally tends to do better. When a collection of politicians, all claiming to represent the interests of the people, naturally do what is in their own best interest instead, all of their interests conflicting with each other, you get disaster. Or, you get the state of the Italian republic as it is today. Given the state Italy (and many others) is in today, I think some libertarianism, in any amount, would probably do them some good as far as their economy goes. For basically at least the last 90 years Italy has had a socialistic, state-run economy. Today we are witnessing the result of that so a little competition and respect for private property might be something they would want to at least consider. 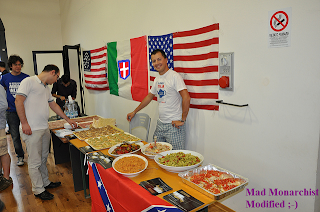 These people are, obviously, republicans but it is just as obvious that they shouldn’t be. Keeping in mind that the first republican government in Italy since unification was the Italian Social(ist) Republic of Mussolini, what has the republic given to Italy? Looking today we see a Communist Party member as President, a Prime Minister who has totally sold-out Italian sovereignty and independence to the European Union and who is simply their tool in Rome, we have a system that squashes creativity, innovation and industry of any kind and which has delivered corruption, economic collapse, a divided populace and a state enslaved by the bonds of debt to foreign agents. I would also remind the people of the Tea Party, Italian libertarians and all Italian republicans that this, aside from the anti-democratic aspects, is exactly what their hero Giuseppe Mazzini wanted. He wanted a “United States of Europe” in which the Italian republic was simply one minor member among many. It is no exaggeration to say that the Kingdom of Italy represented the only system which proudly and strongly stood for independence, not dependence on some foreign power or international organization. Even anti-monarchy historians have considered it praiseworthy that the era of the republic has made Italy content with mediocrity and second or third-rate power status. All those who desire true freedom, real independence and the pursuit of success should embrace the monarchist alternative.
Posted by MadMonarchist at 11:25 AM

Email ThisBlogThis!Share to TwitterShare to FacebookShare to Pinterest
Labels: topical