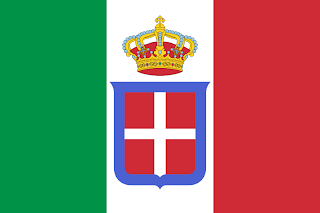 Today is the “birthday” of the Italian republic, marking the day in 1946 that the referendum was held which abolished the Savoy monarchy in favor of the current republic. It was such a grossly undemocratic charade of the order that only democratic republicans seem capable of producing. There remains a great deal of confusion and misinformation about this referendum which brought down the Kingdom of Italy and it deserves being closely examined. The first myth that should be exploded is the idea that the Allies, (of whom the ‘big three’ were Great Britain, the United States and the Soviet Union) were completely impartial in the question of whether the monarchy would be preserved or overthrown in favor of a republic. It goes without saying that the Soviets were opposed to the monarchy on principle and while they had no forces on the ground in Italy they were certainly supporting the communist partisans in the north of the country whose leaders took their marching orders from Moscow. U.S. General Maitland Wilson, who took over for Eisenhower in 1943, sided with the American political leaders who wanted an immediate abdication, however, President Roosevelt sided with British Prime Minister Churchill who favored keeping King Vittorio Emanuele III on the throne, so long as he made no trouble, for the time being in order to avoid political distractions when they still had to focus on defeating the Germans. 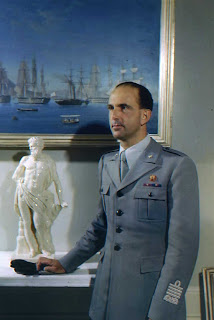 The Allies were certainly not impartial. British Foreign Secretary Anthony Eden despised Crown Prince Umberto and Harold Macmillan, British Minister Resident in the Mediterranean, worked for two days to get the King to abdicate or retire and achieved, at the last minute, the ‘final and irrevocable’ surrender of royal authority. In that first action the Allies, despite their talk of neutrality, took the first step in tearing down the existing legal Italian government. From the very beginning the Allied Control Commission in Italy exhibited an anti-monarchy bias. When the King did abdicate, fuming over the large communist presence in the new government, the British Foreign Office even downplayed the danger of Italy becoming a communist dictatorship, believing it would still be closer to the west than to the Soviets! Most assumed that there would be some sort of vote after the war to determine the Italian form of government but there was no consensus over how this was to be done. King Umberto II favored a plebiscite of the whole people while the leftist enemies of the monarchy (the socialists and communists) wanted the leftist-dominated temporary government to vote on the issue. Clearly there would be some sort of vote but while the leftists were spreading every bit of anti-monarchy propaganda they could, even digging up stories fabricated by the Fascists and kept on file to use against the monarchy, the Allies “advised” King Umberto II not to engage in partisan politics any time he tried to encourage the case for keeping the monarchy.

In terms of who supported and who opposed the monarchy there remains some confusion to be cleared up. One misconception is that the Vatican was opposed to the monarchy and favored a Christian Democratic republic under Alcide De Gasperi who was a very popular man in the Vatican. However, this is simply not true. De Gasperi indeed had many friends in the Holy See but he kept mostly silent about the debate over the monarchy and most in the Vatican favored the monarchy. King Umberto II was very well regarded in the Holy See and the monarchy was seen as the only bulwark capable of keeping the revolutionary communists from gaining a foothold and taking over the country. Far from being in opposition, the Catholic Church actively encouraged people to support the monarchy and vote for the King. Another popular misconception is that the Crown and the Fascists were, and always had been, good friends. Quite the contrary, there was no place more opposed to the monarchy than those areas where support was strongest for the Italian Social Republic (Mussolini’s puppet state in the north) where the most diehard Fascists had migrated at the end of the war. The Fascists themselves launched a propaganda campaign against the monarchy, accusing it of betraying the nationalist movement from the time of unification to push a reactionary agenda on Italy.

So, when it came time for the referendum to be held, the communists, socialists and fascists had been spreading republican propaganda for some time while King Umberto II was largely prevented from making his own case. About all he could do was to travel around the country and meet as many people as possible in an effort to convince them that Italy would be better off under his guidance. Most of the mainstream politicians sat on the sidelines, fearful of being in the losing camp. No honest person could in any way call the referendum a fair expression of the wishes of the whole Italian people. The minister in charge of managing the elections was Giuseppe Romita, a socialist and an avowed republican! In addition to the referendum being held in the aftermath of a terrible war, with the country in ruins and still under Allied occupation, it was decided that this would also be a good time to let all women vote for the “first” time in Italian politics. Actually, Mussolini had given some women the vote in 1925 but based on past experience in other countries, most knew which way this new voting bloc would go. In addition to this, the South Tyrol and the Julian March were not allowed to vote at all as they were still under the rule of the United Nations as disputed territory. There were also still many thousands of Italian military personnel outside the country who were not allowed to vote and nowhere was support for the monarchy higher than amongst the armed forces. Similarly, there were still many Italians abroad in the former Italian colonies who were likewise denied the opportunity to vote (King Umberto II had hoped, in vain as it turned out, that the Allies would not confiscate Italian colonies gained prior to the Fascist era).

The vote was held from June 2-4 and the returns that came in were very telling. Most expected the more conservative south to be more pro-monarchy just as most expected the north, where the communists and fascists were concentrated, to be most republican, however, the resulting returns were extremely dubious. Starting in the south, the returns on June 2 favored the monarchy. By June 3 the returns were even more pro-monarchy and no doubt the republicans were beginning to get nervous. Even in the early hours of June 4 the returns favored the monarchy moving toward the north. However, all of a sudden, support for the monarchy seemed to stop completely and the returns became almost unanimously republican. Reports almost immediately surfaced from northern areas of monarchists being assaulted by communist gangs to prevent them from casting their votes for the King. Yet, immediately the government went to King Umberto II to report a victory for the republic, claiming that the votes from less than one day were more numerous than the monarchist majorities of the more than 2 days previous. 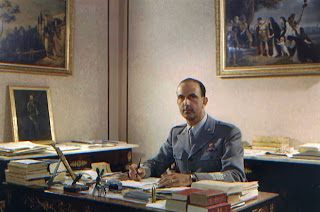 Obviously, King Umberto II had doubts about the process and refused to accept the results at first glance. There had been numerous disturbances after all, to such an extent that a special auxiliary security force had to be dispatched to maintain order at the polling stations. Sadly, not surprisingly, this force was organized and commanded by a republican. The very next day after the referendum, June 5, De Gasperi went to tell the King that the republic had won and to vacate the Quirinale to make room for the President who would soon take his place. Umberto II, however, refused to submit to this until all the votes had been properly counted. The republicans began to flaunt themselves almost immediately and in Naples a group of monarchists were shot down with machine guns when they tried to remove a defaced Italian tricolor from which the Savoy royal arms had been removed, killing 9 and injuring 150. On June 10 the Supreme Court ruled that the referendum had been a victory for the republicans. However, the actual final count was not to be completed until June 18 and King Umberto said he would await the results. The government refused to accept this, saying that the court ruling was sufficient even though the count was not final and ordered the King to immediately leave the country.

There were, of course, those who urged Umberto II to use any means necessary to oppose this obviously fraudulent referendum. With so much support for the monarchy in the south, it was proposed to send the King to Naples, raising his flag there and leading a separate regime, holding a last bastion of monarchy on the Italian peninsula with the ultimate goal of reuniting the country again. However, Umberto II, after witnessing the horrors of World War II, could not bring himself to take any action that would provoke a civil war. Already there had been monarchist demonstrations in Naples, Taranto and Rome that were bloodily suppressed by the republicans and quickly hushed up by the pro-republic press. King Umberto II stated his objections, refused to abdicate or recognize the clearly improper referendum and then peacefully left the country after which the republican authorities showed how shaky their hold on power was by their paranoid persecution of the Savoy Royal House. This was the shameful beginning of the Italian republic and the end of the Kingdom of Italy which had created the united nation in the first place. No honest observer could ever claim it was a free and fair exercise of the democratic process or a true reflection of the will of the Italian people. It was a blatant example of gross injustice from start to finish and the sooner it is repudiated and the lawful monarchy restored the better Italy will be.

Posted by MadMonarchist at 11:23 PM