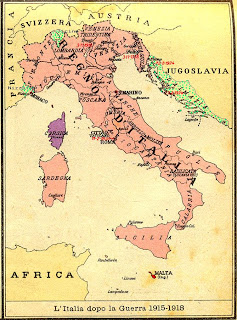 Ever since the unification and independence of the Kingdom of Italy was secured there has been a national longing to restore "unredeemed Italy" to the national borders. The areas which were the focus for the most attention were Trentino, Trieste, South Tyrol, parts of Istria, Gorizia and Dalmatia. Other areas include Nice, Savoy, Corsica and the Italian-speaking corner of Switzerland. Outside of Italy, many people, even many monarchists, have taken a very critical or hostile view of such ambitions, mostly due to fervent support for the late, great "Dual Empire" of Austria-Hungary. Yet, monarchists of all people, even the legitimists among them, should be able to appreciate the Italian point of view given how these regions of "unredeemed Italy" came to be under the flags of foreign powers. Of course, if one takes into account the legacy of Imperial Rome, it would be hard to find any part of the Mediterranean basin that Italy could not lay claim to. However, rest assured, the claims on "unredeemed Italy" do not need to invoke the Roman Empire to justify their case. In most cases the claims date back to the Napoleonic Wars which leads to the rather novel situation of ardent (non-Italian) monarchist legitimists supporting the way the map of Europe was re-drawn by Napoleone Buonaparte.

Most of the eastern areas of "unredeemed Italy" were major points of contention after World War I. For the most part, the Italian claim on these areas came from the legacy of the maritime empire of the Republic of Venice which had extensive holdings along the Adriatic Coast and throughout the Eastern Mediterranean. These areas had belonged to Venice going all the way back to the Middle Ages, were populated by Italians (though certainly not exclusively) and even after so many centuries some level of Italian was still spoken. When Napoleonic France conquered northern Italy the Republic of Venice, by then in a weakened state, declared neutrality. However, Napoleone disregarded this and occupied Venice anyway during his war with the Austrians. When a peace was negotiated, the territories of Venice were divided between France and Austria, part becoming the eastern frontier of the Napoleonic Kingdom of Italy and the rest, stretching down to the Dalmatian coast, became part of the Austrian Empire. When the Napoleonic Wars were ended the Congress of Vienna did not restore the Republic of Venice but simply handed over the French gains to the Austrian Empire as well. It was quite an injustice considering that Venice had tried to stay out of the conflict altogether only to be wiped from the map by Napoleone only to be handed over in total to the Austrians after the fact. After World War I some of these areas were regained by Italy but even into the 1940's there were still 55,000 Italians living in Dalmatia. 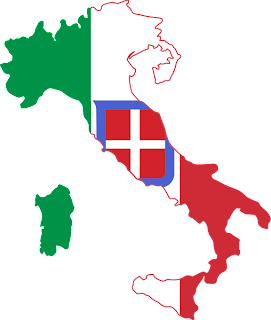 One that was (and to some extent still is) a source of tension is the Alto Adige (South Tyrol), mostly because this was an area populated almost entirely by German-speaking Austrians. The Italian claim to the Alto Adige was, because of this, not so strong or clear-cut as in other areas with large Italian populations. Indeed, many Italian leaders were not terribly concerned with gaining the Alto Adige, preferring other areas populated by their own people and to which the Italian nation had a greater historical claim to. Yet, much of this territory ended up being given to the "Greater Serbia" (Yugoslavia) despite being populated by Italians and formerly belonging to Venice while the Austrian-populated Alto Adige was given to Italy even though it was not considered a priority area to many in the Italian government and supreme command. The claim to the Alto Adige dates far back in history, one would have to go back to the Lombard Kingdom of Italy and even then the northern area was held by the ancestors of the Bavarians. There was also the borders of Italy as defined by the Roman Empire and it was these geographic borders that were often referred to by prominent Italian figures during the Renaissance and later the eras of nationalism and unification.

As for the areas under French rule, other than Corsica, the change-over was quite recent (in historical terms) and widely known. Nice had been ruled by the House of Savoy since the Middle Ages. In various wars France captured Nice a few times but it was always restored to Savoy rule. Likewise, after the Napoleonic Wars, the Congress of Vienna restored Nice to the House of Savoy (Kingdom of Piedmont-Sardinia) as well as the former Republic of Genoa. Garibaldi was, famously, a native of Nice. However, in order to gain French support in the Second Italian War of Independence, Savoy itself and Nice were handed over to the Emperor of the French, Napoleone III and has remained in French hands ever since (though there was brief hope of changing this during World War II). Corsica is a little different. The island belonged the Italian Republic of Genoa going back for many centuries but when Genoa could no longer afford the island, it shared the burden with the Kingdom of France. In 1729 the Corsican revolution broke out with an effort to obtain independence. The constitution was written in Italian and Italian was the official language. However, Genoa, having lost the island anyway, sold her rights to the Kingdom of France who sent in troops to crush the independence movement and Corsica has been a part of France ever since (though for a short time there was an Anglo-Corsican state in which the island was under the British monarchy).

Italian Switzerland, essentially the canton of Ticino and southern Graubuenden canton, the area had been part of the Roman Empire, part of the Lombard Kingdom of Italy and later were held by the Duchy of Milan. The Swiss Confederation began expanding into the region, the Swiss would take some territory, the Italians would take it back and the Swiss would take it again and so on. By 1440 the area was mostly solidly in Swiss hands and has remained so ever since. Also often included in the area of "unredeemed Italy" was the island of Malta, mostly for ethnic, linguistic and geographic reasons rather than for historical reasons. Malta was held by the Knights Hospitaller until the Napoleonic Wars when it was conquered by the French, liberated by the British and then, at the request of the Maltese, remained under British protection until 1964 when it became an independent Commonwealth Realm. In 1974 it broke with the British monarchy and became a republic.

That is the basic background for Italia Irredenta. It is untrue to claim, as many try to, that Italian efforts to regain these areas were due to baseless ambition. Doing so ignores the very long history and extensive colonial outposts (minor though they were) of the Italian city-states which reached from North Africa to the Middle East and Corsica to the Crimea. It seems particularly odd for those monarchists who denounce Napoleone as an illegitimate usurper to at the same time begrudge the Italians for trying to regain areas, historically Italian, that only fell into Austrian hands as a result of an agreement with the Emperor of the French over lands which were Italian going back to the Renaissance and the Middle Ages. Even if one does not agree with any changing of flags, one should at least be able to understand the Italian point of view and the basis for the Italian claim to these former holdings of Genoa and Venice. 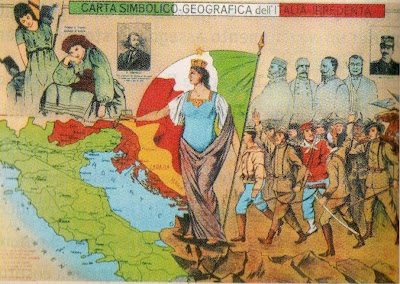 Posted by MadMonarchist at 9:19 AM