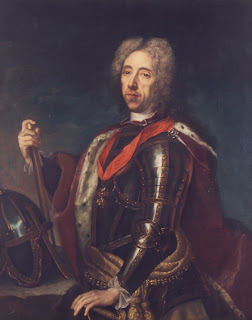 In terms of nationality, categorizing Prince Eugene of Savoy can be a little complicated. He was an Italian by blood, born in France who gained a place in history as a general for the Hapsburgs of Austria. He was born in Paris on October 18, 1663 to Olympia Mancini (a niece of Cardinal Mazarin) and Eugene Maurice, Count of Soissons, Count of Dreux and Prince of Savoy (a grandson of Duke Carlo Emanuele I of Savoy) and son of the Prince of Carignano. At the time this was a collateral branch of the House of Savoy but it would eventually become the line that would make up the Kings of Italy. Eugene was the youngest of five sons who, along with their three sisters, saw little of their parents. His father was a dutiful soldier, usually off on campaign, and his mother was wrapped up in the petty politics of the French court surrounding King Louis XIV. Prince Eugene was not very old when his father died and scandal forced his mother to flee France across the Belgian border, then the territory of the House of Hapsburg. Prince Eugene, as a younger son, was expected to have a clerical occupation but the life of a priest did not appeal to the young Prince Eugene and he applied to King Louis XIV for a commission in the French army. Unfortunately (for France at least) the King refused, being rather unfavorable towards the family of the Prince and not terribly impressed by his, perhaps, over-confident attitude. 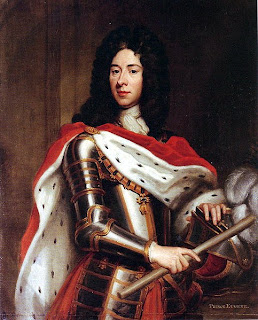 So it was that the Kingdom of France lost the chance to have as one of their own a man who would prove to be one of the greatest military leaders in history and certainly the most renowned captain of his age. Of course, throughout his childhood, no one expected Prince Eugene to pursue a military career at all. Considered to be something of a weakling and not at all attractive, the grandmother who mostly raised him pushed toward the Church but, as time would tell, the priesthood was not his calling. He went to Austria and joined the army of the Hapsburg Emperor, rising rapidly through the ranks, establishing his reputation early in the war to liberate Hungary from the Turks and the War of the Grand Alliance. His rise was based purely on merit; he won battles and was rewarded with promotion after each success so that by the time he was thirty he had already attained the position of field marshal. One of his greatest early victories was at the battle of Zenta in 1697. A 10-hour forced march put his men into position quickly, deployed behind hills which enabled him to take the Turks by surprise as they attempted to cross the Zenta River into Transylvania. Prince Eugene launched a pincer-attack that pinned the Turks against the river and allowed his army to wipe them out. Over 20,000 Turks were killed in the battle compared to losses of less than 500 for Prince Eugene. 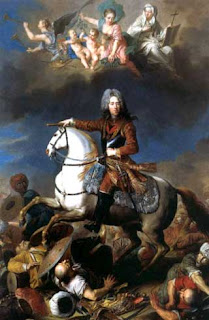 This also illustrates the tactics that would define the career of Prince Eugene of Savoy and win battle after battle for him; speed, mobility and clever use of the terrain to his own advantage. At these, Prince Eugene was a master and they proved a winning combination for him. During the War of the Spanish Succession he defeated the French at Carpi in 1701, joined with the British forces of the great Marlborough to defeat the French and Bavarians at Blenheim in 1704 and two years later led a victorious campaign that drove the French out of Italy. In 1708 he besieged and finally captured the French fortress at Lille, designed by the brilliant French military engineer Sebastien le Prestre de Vauban, which had previously been considered totally impregnable. That same year the Prince joined forced with Marlborough again to administer another victory over France in Flanders. Throughout his career, the Prince often made the supposedly impossible seem almost easy as he won battle after battle and campaign after campaign, rapidly gaining the reputation of one of the greatest military leaders of his time. Given that so many of his victories were over the armies of France, one cannot help but wonder if anyone in Paris cursed the seemingly inconsequential decision of King Louis XIV not to enlist the young Savoy in the French army as he had originally intended. One cannot help but wonder how history might have been changed if he had done so and if the Prince of Savoy had fought under the golden lilies instead of the double eagle. 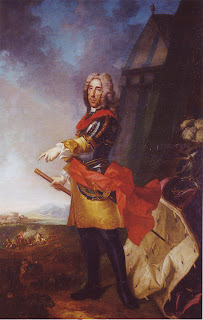 Already a living legend in western Europe, Prince Eugene ended his career where he had first started it, fighting in the east against the Ottoman Turks. He fought his last major campaign in 1716 which saw a battle any observer would have expected to be his last. The Prince found himself totally surrounded by a massive Turkish army of 200,000 men with only a quarter as many in his own ranks. Anyone would have thought his fate was sealed. However, still true to character, the Prince kept his cool and would not even consider conceding the field and attempting to retreat. Instead, he targeted the Turkish artillery and launched a daring bayonet charge on the guns in the middle of the night, capturing the enemy position, throwing their army into confusion and snatching victory from the jaws of defeat. The entire situation was reversed and in the aftermath the Hapsburg armies marched triumphantly to liberate the city of Belgrade. After this campaign, the Prince retired from active duty in the field but continued to serve as a military advisor to Emperor Charles VI. Still, the Prince had always been drawn to the active and adventurous life of the soldier and that never went away so that he found it extremely difficult to remain behind a desk in Vienna. He could not resist joining the Austrian army in the field in the Rhine valley during the War of the Polish Succession. He died in Vienna two years later on April 21, 1736. 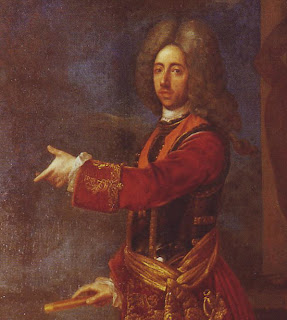 Still today Prince Eugene of Savoy stands as one of the most brilliant military leaders Europe has ever produced. He was a master at quick movements, assessing a situation and turning it to his advantage and he was never lacking in courage. In fact, he sustained many serious wounds throughout his career due to his habit of always leading from the front. He worked well with his allies and never seemed to have any prejudices against anyone other than the French against whom he remained quite bitter throughout his life. He abolished the custom of purchasing commissions in his army and promoted men based solely on their ability and his fondness for cavalry in scouting enemy positions and fighting in both mounted and dismounted roles would influence the Hapsburg armed forces for centuries. He also took great care to establish forward supply bases to keep his troops well fed and well equipped, proving the point that, as the old saying goes, ‘amateurs study tactics, professionals study logistics’. His campaigns were brilliant and secured the place of Austria as the dominant power in the German-speaking world. Today he might not be as well remembered as some of the other great captains of history but the Comte de Saxe, Frederick the Great and Napoleon all studied his career and adopted his innovations. It says something that Napoleon, Emperor of the French, considered Prince Eugene of Savoy one of the most gifted and influential military leaders of all time. One cannot help but wonder what the Prince would have thought of such a compliment coming from such a quarter.

Posted by MadMonarchist at 10:42 PM