An Italian Queen for Britain

On this day in 1685 HM King James II came to the British throne (upon the death of his brother Charles II who had no legitimate heirs) and alongside him was his Italian consort Queen Mary of Modena, who was a devout Catholic woman and a strong and caring wife, despite being very young when she was first married to the (then) Duke of York. In fact, she was really a better wife than James II deserved. When she gave birth to an heir to the throne, the Protestants of Britain rose up in revolt and invited a Dutch invasion led by the royal son-in-law William of Orange to overthrow King James and Queen Mary and take the throne for himself and his wife; avoiding Britain going back to being a Catholic monarchy again. The Royal Family was forced to flee to France in the face of this so-called "Glorious Revolution" which really marked the beginning of the British constitutional monarchy as we know it today. King James II tried to restore himself in Ireland but was not successful and Queen Mary supported him all the time, both for his sake and for the future of their son. She always tried to use all the influence she had in France and Italy to support the "Jacobite" cause and the restoration of the old royal line to the British throne. Even during so many long years of exile, loyal Jacobites always recognized Mary of Modena as the true Queen consort and (later) Queen mother of Great Britain and Ireland. When King James II died, Queen Mary of Modena acted as regent at the court in exile on behalf of her son and published the official Jacobite manifesto, detailing the political plan of what a Stuart restoration would mean for the three kingdoms. She was devoted to the cause for her entire life, never relenting until her death by cancer in 1718. 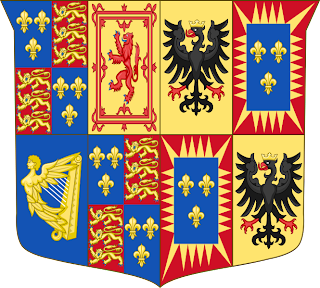 Posted by MadMonarchist at 1:02 PM