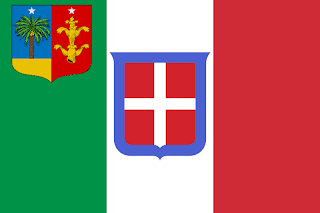 The relationship between Libya and Italy has known equal extremes of good and bad. Since the arrival, or more accurately the return, of Italian power to north Africa there was a period of small-scale but continuous guerilla warfare which was ended only by some fairly harsh measures (though certainly not unprecedented ones). Following that, however, Libya became a model colony with generally good relations between the Italian and non-Italian populations. Modern port facilities, infrastructure and cities were built up and advanced methods of agriculture introduced by Italian settlers improved the local economy. Libyan natives were recruited into the Italian military and even formed some very effective and elite units. After World War II, there would be another round of extreme hostility (though without actual bloodshed) followed by another period of reconciliation, albeit of a tense and often false variety. Although it is not a subject that is that well known, a great deal of what people think they know about it is not entirely accurate. Many have heard only one side of the story of Italian Libya or have seen simply the “Hollywood” version without knowing any of the actual facts. Few people, for instance, probably know that Libya itself was an Italian invention. Prior to the Italian colonial period there was no such country on any map.

The area of northern Africa today known as Libya, which consisted of simply a few coastal cities, had been a part of the Roman Republic after the fall of Carthage and later the Roman Empire, which they joined by request. There is documentation of Christians living in Libia (as the Romans called it) as early as the reign of Emperor Claudius. In time though, the Roman Empire fell, the Arab Muslims swept out of the Arabian peninsula and across North Africa and the area eventually became part of the Turkish Ottoman Empire as the three provinces of Tripolitania, Cyrenaica and Fezzan. The Kingdom of Italy, for reasons of both history and geography, had long looked to the region as the national “fourth shore” of Italy and the French and British agreed that Italy should have a legitimate claim to the area in return for Italy voicing no objection to their gains in other parts of northern Africa. Yet, in the race for colonies Italy seemed to be left behind by the other European powers despite previous agreements and Italians were particularly outraged by the French seizure of Tunisia which had a very old Italian community and which Italy (and Piedmont-Sardinia before that) long had an interest in. Under the government of Prime Minister Giovanni Giolitti the Kingdom of Italy decided to take action to secure the region before it could be taken by another power.

An ultimatum was delivered to the Ottoman Empire, which was refused of course, and the result was the Italo-Turkish War of 1911-12. The result was that the Ottoman Sultan ceded Tripolitania, Cyrenaica, Fezzan in North Africa and the Dodecanese Islands off the Turkish coast to the Kingdom of Italy. The “Fourth Shore” had been secured, at least in legal terms. Italy did not have time to do much in the few years before the outbreak of World War I in which the Italian presence in north Africa was drastically reduced. In fact, after initially declaring war only on Austria-Hungary, the Kingdom of Italy declared war on the Ottoman Empire because of their arming and support of Islamic rebels in north Africa (and east Africa for that matter) in an effort to regain their dominance in the region. This campaign included attacks on the French and British as well, mostly carried out by the Senussi Islamic sect but, though the Italian presence was reduced to a few coastal footholds, they were ultimately defeated and full Italian rule was restored across the colony.

However, trouble would arise again, mostly from the Senussi, with guerilla attacks on Italian forces and (more often) the killing of Italian settlers. This was the long small-scale war led by the now famous Omar Mukhtar, a figure who has since become probably the most iconic Libyan patriotic symbol. This was an irregular war and undoubtedly brutal but there are a few facts that should be kept in mind, but sadly seldom are. The first is that Libya was not a country that Italian forces just invaded and conquered, robbing the locals of their independence. There was no such country as Libya at all at the time and it had never been independent. There were three provinces which were ruled by the Turks until, after the war of 1911-12, they were legally signed over to Italy. It was not until 1934 (long after the war was over) that the three provinces were grouped together as one colony and named Libya which was the old Roman name for the region. The local people never had political independence for the Italians (or anyone else) to take away and, in fact, they even gained a great deal more personal freedom and civil rights than they had had previously under Italian rule (after the war was over of course). They had the same rights as the Italians at the time, though this was during the Fascist era. However, even the Fascist Party was open to Arabs, Muslims, Black Africans and all others, with even a special branch specifically for Muslim Fascists.

The war was never a major problem for Italy but it was a nuisance and ultimately harsh measures were taken by General Badoglio and General Graziani in ultimately breaking the resistance and ending the war successfully for Italy. This included the construction of a barbed wire frontier along the Egyptian border (which is still in use today) and, most controversially, the movement of local populations supporting guerilla activity into concentration camps where many died of disease. An unfortunate event to be sure but no different than what the British had done in South Africa to end a similar insurgency by the Boers. It is also often ignored that this was not done simply out of cruelty but in reaction to attacks on Italian farms and the murder of Italian settlers. It is also often ignored, particularly today, that many Libyans welcomed the Italians and the progress and modernization that came with Italian government. In fact, when the rebel leader Omar Mukhtar was finally taken into custody it was a unit of Libyan cavalry working with the Italians that did the job. The harsh measures employed may be frowned on today but they were taken as a last resort and they got the job done, ending the war and pacifying the colony by 1934.

The camps were in operation only from 1931 to 1933 and the cash-strapped Italian government did the best it could for the people there, providing food and medical care as available. After they were closed and peace was restored, Libyans had freedom of religion, freedom of education, freedom to pursue any vocation including working for the government or military. When Air Marshal Italo Balbo was appointed Governor-General, Libya progressed rapidly with the new farming communities established, model villages, for both the Muslim natives and Italian settlers, new port facilities and vast infrastructure improvements in the way of roads, bridges and the first railroads and airports. Many of the buildings, bridges and highways still in use in Libya today were first built by the Italians. Tourism also became a major industry (probably the only time in Libyan history before or since that such has been the case) with people coming to see the archeological digs on the old Roman settlements and the new Tripoli Grand Prix which drew racing fans from all over the world.

Immediately before and during World War II several divisions of Libyan volunteers were organized and put in the field for the first invasion of Egypt. Air Marshal Balbo even formed a special elite corps of Libyan paratroopers before his untimely death. The outbreak of war meant the end for the greatest period of progress and prosperity that Libya had known since, well, the last time it was governed from Rome in ancient times. In the aftermath of the Italo-German defeat in North Africa, Libya was mostly ruled by the British under whose sponsorship a new Kingdom of Libya was established under Idris as-Senussi, Emir of Tripolitania and Cyrenaica in 1951. He rule lasted until 1969 when he was overthrown in a military coup by Colonel Muammar Gaddafi who ruled Libya as a dictator until 2011 when he was overthrown and murdered in a popular uprising. Gaddafi had first been extremely hateful toward all Italians, expelling the thousands of Italians who still lived there and even threatening to destroy the bodies of the dead who had been killed fighting for Libya if Italy did not remove them. Later, however, the Italian government made a reconciliation, of sorts, with Gaddafi but it was a shameful affair, a total selling-out of national dignity and slavish pandering in exchange for Libyan oil and Libyan cooperation in stopping illegal immigration. This included servile apologies for past misdeeds and billions in “compensation” for the years of Italian rule, all of which is utterly disgraceful considering that Italian rule had been perfectly legal, agreed to by all the major powers and the former Turkish rulers of the region. In any event, despite the wealth generated by oil reserves discovered after the war, Libya has, as a matter of fact, never known such stability and beneficial development since independence as existed during the years of Italian rule.

Posted by MadMonarchist at 8:45 PM