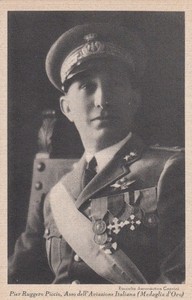 One of the founding fathers of the Regia Aeronautica was Count Pier Ruggero Piccio who was also one of the most accomplished Italian fighter pilots of the First World War. He was born in Rome on September 27, 1880 and graduated from the Military Academy of Modena in 1900, assigned as a second lieutenant in the 43rd Infantry Regiment. He saw service in central Africa as part of an officer exchange program with the Kingdom of Belgium and he saw extensive service in the Italo-Turkish War as an artillery officer and the commander of a machinegun section attached to the infantry in which role he earned the Bronze Medal for Military Valor in 1912. This war saw the Kingdom of Italy become the first to use aircraft in combat, though air operations ended before Piccio arrived in Libya. Nonetheless, he had a great interest in this new branch of military service and tried repeatedly to gain the chance to train as a pilot. After being promoted to captain in 1913 he finally got the opportunity and attended Malpensa flying school. Passing with flying colors he qualified first to fly the Nieuport monoplane and later the Caproni bomber before being assigned to the fifth squadron. In 1914, after World War I had broken out but before the Italian intervention, he was awarded the Order of the Crown of Italy. 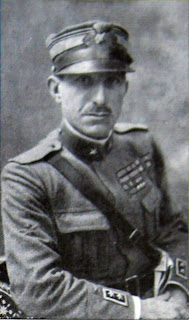 In January of 1915 the Military Air Corps was established and later that year the Kingdom of Italy entered the conflict with a declaration of war against Austria. Piccio had his first chance at aerial service in wartime, flying reconnaissance missions. He showed great skill and courage, carrying out his missions despite heavy enemy fire and having his aircraft hit numerous times. Awarded another Bronze Medal he was posted to Malpensa for more bomber training. After finishing he took command of third squadron flying the Caproni bombers in missions against Austria from August 1916 to February 1916. After that he was given more training in air-to-air combat in France and returned home to command a fighter squadron, scoring his first success in bringing down a German observation balloon. He was supposed to wait for French pilots to join him with special anti-balloon rockets but went out on his own, doing the job and earning a Silver Medal. In the spring of 1917 Piccio shot down an Albatros, rapidly gaining more ‘kills’ and earning the status of an ace. At one point, he even managed to shoot down the great Lt. Frank Linke-Crawford, the fourth highest scoring ace of Austria-Hungary (thankfully, Linke-Crawford survived though he was later killed in combat).

After shooting down seventeen enemy aircraft he was promoted to lieutenant colonel and made Inspector of Fighter Squadrons. However, by the spring of 1918 he was back in action again, gaining more victories but also providing invaluable service by producing the first manual on air tactics for the Italian forces, devising new flying formations and generally solid regulations, based on his experience, on how to achieve victory in the air. Earning the Gold Medal for Military Valor, by the summer of 1918 the Italian air forces had gained complete dominance over Austria-Hungary in the skies, inflicting horrendous losses on the enemy and effectively breaking the air power of the Dual Monarchy for good. Italian fighters and bombers could attack Austrian ground forces at will, however, ground fire was still dangerous and in the autumn of 1918 luck ran out for Colonel Piccio. He was shot down over enemy territory and captured by the Austrians. Still, he emerged as one of the top Italian flying aces of the Great War with at least 24 victories to his name. He was never formally released by the Austrians but simply walked out in disguise as Austria-Hungary collapsed at the end of the war.

In 1921 Piccio was sent to France but came back to Italy where air power for the establishment of the Regia Aeronautica in 1923. Air power was being given a new emphasis by the new leader of Italy, Benito Mussolini. At the time, only Great Britain and Italy had chosen to develop a fully independent military aviation branch of the armed forces (and France was the only other continental power then building up forces for air combat). Piccio had the right balance of a record of success in the air as well as a reputation for organizing air forces, codifying techniques and instilling discipline that made him the ideal choice to be the military deputy to the Undersecretary of the Air Force. Piccio and his civilian counterpart streamlined the force, gained greater funding, started looking for new and better aircraft design and established a formal air force academy in Livorno. From 1923 to 1925 Piccio served as Commandant General of the Regia Aeronautica, his title later changed to Chief of Air Staff. Also in 1923 he received the prestigious appointment of an honorary aide de camp to King Vittorio Emanuele III.

As Chief of Air Staff from 1926 to 1927 Piccio did begin to have problems with his civilian counterpart and then with Air Marshal Italo Balbo. Much of this stemmed from Piccio’s lavish lifestyle in Paris. Ever since his earliest time there after joining the army, Piccio had a great attachment to the high life of Paris and he had also spent a great deal on the Paris stock market. It was still quite controversial when Marshal Balbo dismissed him but Piccio remained a national hero for his extensive service and illustrious war record. In 1932 he was promoted to lieutenant general and in 1933 the King appointed him a Senator of Italy. His government posts still did not manage to keep him away from France for long and he continued to spend much of his time in Paris, sometimes acting as a go-between for the French Premier and Mussolini. Despite being appointed to the Senate as a member of the Fascist Party, General Piccio was not fond of the direction Mussolini was taking the country. He moved to Switzerland and remarked to an old Belgian comrade from World War I that Italy had spent years trying to defeat the Germans only to have Mussolini helping to bring them back again. He stayed in Switzerland during World War II, giving up the wealth he had gained through his associations with the Fascists (having become thoroughly disgusted with them) and while there he helped Italian soldiers to safety after the armistice and aided the resistance movements in both France and Italy. General Pier Piccio died in Rome on July 31, 1965 still remembered as one of the great aces of World War I and one of the founders of the Regia Aeronautica.
Posted by MadMonarchist at 5:56 PM