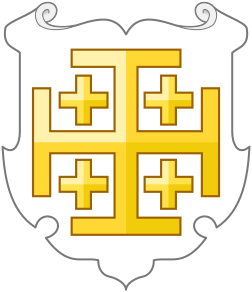 Today, the only reigning monarch who still includes “King of Jerusalem” among their list of titles is the King of Spain. In the past, however, the long dormant succession dispute over the former Kingdom of Jerusalem was carried on, nominally, by a number of monarchs each claiming the title, including the King of Italy and the Emperor of Austria. After the overthrow of King Alfonso XIII of Spain, for a time the King of Italy was the only reigning monarch who included among his titles that of King of Jerusalem. How did this come about? How did the House of Savoy come to have a claim on the crusader Kingdom of Jerusalem? It all goes back to the marriage of Queen Charlotte I of Cyprus to her cousin Ludovico of Savoy who reigned alongside her as King of Cyprus. Charlotte was only fourteen when she became Queen of Cyprus and she was quite a forceful character. By that time she was also already on her second husband, her first, John of Portugal, passing away in 1457. In 1459 she married Ludovico of Savoy, Count of Geneva as a way of strengthening her throne against the schemes of her illegitimate half-brother who was constantly trying to take her kingdom from her.

The Kings of Cyprus had held the title of King of Jerusalem ever since Hugh III seized it upon the death of King Conrad III, last of the Hohenstaufen line that started with Emperor Friedrich II and his pilgrimage/crusade. The title to the kingship of Jerusalem was then passed down by the monarchs of Cyprus to the person of Queen Charlotte who died at the age of 43 in 1487. She and King Ludovico had no children and her husband had predeceased her, Ludovico having died in 1482 in France. However, before her death she ceded her titles to the next legitimate successor Duke Carlo I of Savoy, also known as ‘Carlo the Warrior’ who inherited the titles to Armenia, Cyprus and Jerusalem. Queen Charlotte I was given a lavish funeral, paid for by Pope Innocent III and buried in St Peter’s Cathedral. However, at the end of her life, she had been driven from her lands and had only the titles to pass on, not the actual control of the territory they represented. Her primary kingdom was being held by the Republic of Venice when Duke Carlo I inherited the title to it. Rather than provoke a war, the House of Savoy chose not to press their claim to the throne of Jerusalem (or Cyprus or Armenia) but still maintained the titles for the principle that they believed these were rightfully their own and, perhaps, in the hope that one day they could be restored in fact as well as in name.

Posted by MadMonarchist at 12:56 AM