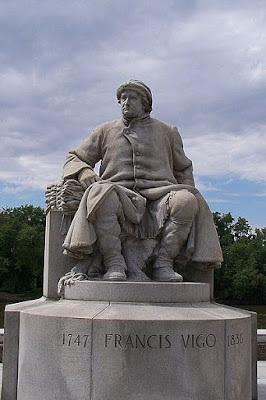 One Italian who became a celebrated hero in the American War for Independence was Francis Vigo. A Piedmontese, he was born Giuseppe Maria Francesco Vigo on December 13, 1747 in Mondovì, Italy. Originally a soldier of fortune, like many Italians at the time, he came to America as part of the Spanish army stationed in New Orleans, Louisiana. When his service was finished he opened a fur trading business in the (then) frontier town of St Louis, Missouri in 1772. In 1783 he moved to Vincennes, Indiana and opened another fur trading business there, buying and selling among the Native Americans and the local settlers. When the American War for Independence broke out, Vigo aided the patriot cause and is most famous for his work as a scout and what we would today call an espionage agent for George Rogers Clark, leader of the rebel forces on the western frontier. While gathering information for Clark, Vigo was captured by Native Americans in service of the British Crown and handed over to the local British Governor, Henry Hamilton (aka "Hamilton the Hair Buyer" for his policy of rewarding Natives for the scalps of rebels). 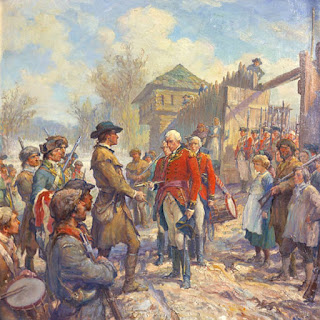 Hamilton suspected Vigo of aiding the American rebels but as he was legally a subject of the King of Spain, he could not be held and as a possible traitor and so he was paroled but kept under close watch. However, Spain and France were both sympathetic to the American cause and there was also religious solidarity on the part of Catholics on the frontier in opposition to Protestant Britain. So, Father Gibault, the local Catholic priest, organized the French population of Vincennes to protest to the Governor for Vigo's release, even threatening to cut off the supplies sustaining the British garrison at Fort Sackville if Hamilton refused. Hamilton released Vigo but made him promise not to "do any thing injurious to the British interests on his way to St. Louis." Vigo was nothing if not honest and so he returned to St Louis first and then traveled to Kaskaskia to inform Colonel Clark of the British defenses at Vincennes. He had kept his word not to do anything to harm British interests "on his way to St Louis" while still carrying out his mission on behalf of Clark. Because of the information he provided, Clark was able to take Vincennes in 1779. 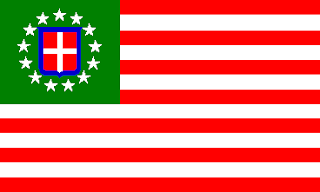 Vigo was also a very successful businessman and he was the leading financial backer of the American cause in the old northwest (as what is today known as the midwest was called at the time). He willingly exchanged paper promises from the Continental Congress for hard currency that was actually valued and useful. Unfortunately for Vigo, he was never repaid so his support for the cause of independence was a complete sacrifice for him. After the war, he continued his business, expanding his trade network to the east coast and in the early 19th Century was responsible for the establishment of Vincennes University as well as becoming the commanding colonel of the Knox County Militia before his retirement in 1810. He died on March 22, 1836, an honored and respected figure in the community but still not compensated by the American government for the great losses he incurred on their behalf. A monument in his honor today stands in the George Rogers Clark historical park in Vincennes, Indiana.
Posted by MadMonarchist at 6:46 PM