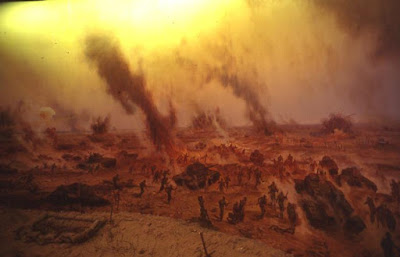 This month marks the 73rd anniversary of the end of the (second) Battle of El Alamein, a turning point in World War II and a proud, though tragic, page in the history of the Royal Italian Army. It is unfortunate that so many people outside of Italy have never heard of the heroic part played by the Italians in this critical battle and the astonishing courage and determination displayed by the Italian forces. All too often, English-speaking accounts of the battle tend to ignore Italian participation entirely and focus only on the Germans with many never mentioning the Italians at all. It should be mentioned at the outset to what ultimately proved to be a doomed campaign that the commander of Italian forces in north Africa, Marshal of Italy Ettore Bastico, opposed the offensive into Egypt believing it would end in disaster. Not only was he correct about that but he was also correct in estimating why this would happen. He warned that the Axis supply lines would be stretched too thin and their forces would wither in the barren countryside if their attack became stalled for any appreciable length of time which, given the defensive tenacity of the British forces, was bound to happen.

This is what came about and, in this regard, mention must be made of the decision to call off the invasion of Malta, a key British island fortress that sat athwart the Axis supply lines across the Mediterranean from Italy to north Africa. Malta had been bombed to rubble, the Italian Royal Navy had taken control of the central Mediterranean Sea and the island was ripe for the taking. However, though German Field Marshal Erwin Rommel was technically subordinate to Marshal Bastico, he was able to convince Hitler and Mussolini to postpone the attack on Malta to divert German and Italian air forces to cover his Egyptian campaign. He argued that Malta had been effectively neutralized and if his offensive succeeded in seizing Alexandria and the Suez Canal there would be no need to take Malta by force anyway. One particularly elite unit that was to play the leading role in the conquest of Malta was the Italian airborne division “Folgore” which was instead transported to Africa. The Axis offensive went well enough at first but finally ground to a halt at El Alamein. The Allied forces, built around the British 8th Army, gained information about the disposition of the Axis forces and all their plans. While Rommel was away in Europe on medical leave British Field Marshal Montgomery attacked with overwhelming force and by the time Rommel arrived back on the scene defeat was a foregone conclusion.

Despite Hitler’s order to stand fast and fight to the last man, Rommel decided to retreat. This was possible for the German units which were highly mechanized and had plenty of transportation but the largely infantry formations of the Italian army would be left in the lurch. The Italian army was deployed at the southern end of the Axis line which ran from the coast to the edge of the impassable Qattara Depression. It would fall to the Italians to stand their ground and hold off immensely superior British forces in order for the Germans to have time to retreat to safety. As the British attacked, the Italian armored units were the first to endure the worst. Their modest M13/40 medium tanks were totally outmatched by their British enemies both in armor protection and in firepower (as well as rang, mechanical reliability and virtually every other aspect). Still, the Italian tanks fought to the finish as best they could, holding on until they were wiped out to the last man. Field Marshal Rommel himself wrote that, “In the ‘Arieta’ [Italian tank division] we lost our oldest Italian comrades, from whom we had probably always demanded more than they, with their poor armament, had been capable of performing.”

In terms of armor, the best the Italians could put forward was their Semovente 75/18 self-propelled gun or tank-destroyer which did considerable damage on the British but there were simply too few of them to have much of an impact. The Cannone-Mitragliera Da 20/65 Modello 35, a 20mm anti-aircraft gun, was also quite effective but, likewise, was never available in sufficient numbers. At the outset, Montgomery had at his disposal some 1,230 tanks including British Crusaders, Valentines and Matildas as well as American Lees/Grants and Shermans. By contrast Rommel had only 210 German panzers and 280 Italian tanks. Yet, the Italian forces fought with astounding ferocity and effectiveness. At the start of the British offensive, Operation Lightfoot, the front held by the Folgore Division repulsed four British attacks in four days despite being outnumbered 5 to 1 in guns, 13 to 1 in men and 70 to 1 in tanks. The Littorio Armored Division and Trieste Motorized Division also inflicted heavy losses on the British, fighting to the last man. Survivors of the Bologna and Trento Divisions were overrun by the British but fought their way out only to die of exposure in the desert without transportation. In one attack by British imperial troops the Italians lost 45 men compared to 400 of the enemy but the numerical superiority of the British was still able to make up such losses.

Most focus, however, has always been on the highly trained Italian paratroopers of the Folgore. They were ordered to hold their positions to buy time for the other Axis forces to escape back into Libya. Against repeated attacks by superior British forces they fought literally to their last round of ammunition. Throwing back one British advance after another, eventually all of their tanks were destroyed, all of their heavy guns were destroyed, all of the trench mortars were destroyed or out of ammunition and yet still they continued to hold on. The innovative Italians improvised their own anti-tank weapons by slipping out into the desert to dig up their land mines and using these along with Molotov cocktails, hurled themselves at the attacking enemy forces until they were almost completely wiped out. The men of the Folgore had been ordered to hold for 24 hours. Instead, they held off the forces of the British Empire for 72 hours and destroyed over 120 enemy tanks and vehicles in the process. The fact that any German forces survived the battle at all was thanks entirely to the Italian troops, like those of the Folgore, who paid with their lives to buy the time for them to escape to safety. Their sacrifice is not always remembered, outside of Italy anyway, but it certainly should be as no soldiers anywhere ever fought better.

When Marshal of Italy Ugo Cavallero, chief of the Supreme Command, agreed with Rommel and ordered the retreat, Italian forces remaining in the field often had no real chance of survival. Chronically short of transportation to begin with, by the time the order to retreat came, most units had nothing left at all and were too far forward to extricate themselves. Many were left helpless without ammunition, surrounded by the British with no means of escape and left with no other option but to surrender. Others tried to escape on foot but while some covered astounding distances, most were quickly overtaken by the enemy, exhausted and dehydrated with no means of resistance. There were also some occasions of bitterness due to a few cases of Germans commandeering Italian transport for their own men or repairing broken down Italian vehicles and thus claiming them as their own, leaving the Italians stranded. The Second Battle of El Alamein was a tragedy for Italy, costly and painful. Yet, at the same time, it is also a source of pride to remember how valiantly the Italians fought and how dearly they sold their lives in a desperate battle against an overwhelming foe.
Posted by MadMonarchist at 6:28 AM