Today is the feast of Blessed Urban V, one of the “Avignon Popes” and an ardent supporter of the crusades against the Islamic Ottoman Empire. It was Pope Urban V who called for what would become known to history as the “Savoyard Crusade” in 1363 though it would not really get started until 1366. The original leaders of this crusade were supposed to be the kings of France and Cyprus but neither of them actually ended up going so the name for the whole adventure comes from the man who did actually lead the fight, the “Green Count” Amedeo VI of Savoy, one of the forefathers of the Italian Royal Family and one of the most celebrated figures in the long history of the House of Savoy. King Louis I of Hungary was also persuaded to participate, fresh off of a victory over the Bulgars, even taking a son of the Czar of Bulgaria prisoner. Count Amedeo VI assembled his army, mostly from his own lands, while Urban V had difficulties finding transport for them as the Venetians preferred to trade with the Muslims rather than make war on them. Promised support from the German Emperor likewise never materialized.

Count Amedeo made it to Venice, though his funds from the Pope were cut back because he would not be going to the Holy Land itself (though Urban V still blessed the enterprise), this change did help persuade the Venetians to be more cooperative in transporting the Savoyard crusaders and on June 21, 1366 the small army set sail down the Adriatic. Political complications boiled the entire time with the King of Hungary not moving to assist as he had promised and with tensions between the Pope and the Byzantine Emperor John V (a first cousin of Count Amedeo VI) over the papal demand that the Emperor reunite with the Catholic Church in exchange for Latin assistance to his besieged empire. Nonetheless, Count Amedeo forged ahead into the Turkish waters of the Dardanelles, joined by the Emperor’s son-in-law and the Patriarch of Constantinople with a contingent of soldiers. The Emperor himself was, at the time, being held prisoner by the Bulgarians. 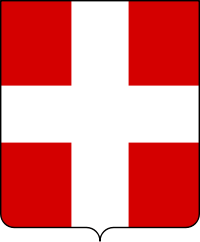 On August 22 the Savoyard crusaders landed and made their initial attack on the shores of the Gallipoli peninsula. The Italian soldiers attacked the walls and must have intimidated the Turkish defenders for they fled during the night, leaving the local populace to open the gates and welcome in their Christian liberators. Count Amedeo worked feverishly to establish new garrisons for the important positions such as the key fortresses and the entrance to the straits. As the Turks continued to retreat, the Savoyard knights harried them in pursuit, driving them from the peninsula. Early in September they reached the city of Constantinople itself, most of them staying with their fellow-Italians in the Genoese quarter, some in the famous Galata Tower itself (which was in the Venetian quarter). While in Constantinople, the “Green Count” also sent messengers to make contact with his trapped cousin the Byzantine Emperor John V. Of course, the Emperor asked Amedeo VI to come quickly to his rescue.

The “Green Count” had no papal authorization to make war on the Bulgarians but he could hardly ignore the request for help from his cousin and the Byzantine Empress promised sufficient funding for the expedition to rescue her embattled husband. The “Green Count” made his decision and, leaving loyal Italian troops behind to hold their position in Constantinople, set out in early October across the Black Sea to Bulgaria to find the Emperor. His small army finally landed though exactly where and whether certain cities taken resisted or not is still debated by historians. One fortress that resisted fiercely was Nesebar (or Mesembria) which refused to surrender, forcing the Savoyard troops to take heavy casualties storming the citadel. Then, as was customary at the time, the defenders were put to the sword and the city pillaged. Several more towns were captured afterward until the Savoyard troops had secured control of the Gulf of Burgas.

Throughout the rest of October, November and into December cities were taken, raids were launched and all the while messengers tried to arrange the safe return of the Emperor with the local Bulgarian authorities. Finally, in late January the following year, Emperor John V was delivered to the “Green Count” unharmed. By the time the Savoyard troops returned to Constantinople, after the Emperor had gone ahead of them, a lavish ceremony was prepared to welcome them with the assembled crowd shouting, “Long live the count of Savoy, who had delivered Greece from the Turks and the Emperor, our lord, from the hands of the Emperor of Bulgaria!” With all of that out of the way, the “Green Count” wanted nothing more than to get back to his original purpose of making war on the Islamic hordes. This he did but he had, by this time, a greatly depleted force from what he had started out with.

There were more battles against the Turks but as often defensive as opposed to offensive ones and ultimately the Savoyard crusaders were mostly fighting for the means to travel back to Italy. The “Green Count” did his Christian duty off the battlefield as well by trying to patch-up the East-West Schism of Christianity, naturally to no avail. He had brought along a Latin Patriarch of Constantinople but, to avoid offending the Greeks, had put him up in Gallipoli rather than the city of Constantine itself. He was not to stay however as the Latin Patriarch, Paul, set sail with the rest of the Savoyard crusaders when the left in June of 1367, handing their conquered territories over to the Byzantines. The following month the “Green Count” and his remaining crusaders arrived back on Italian shores in Venice to great acclaim.

Count Amedeo VI and his men had fought many great battles and the history reads better than any fictional adventure, fighting heathen armies, conquering fortresses, rescuing an emperor but, in the end, the fruits of their victory did not last. The count had left the city of Emona in the hands of his natural son, Prince Antonio, who was tricked into an ambush and ending up dying in a Bulgarian prison. Gallipoli was held by Christian forces for the next ten years until it was handed over to the Turks by the son of Emperor John V in return for Turkish support against his own father. Such was the way of the Byzantines.
Posted by MadMonarchist at 10:55 AM