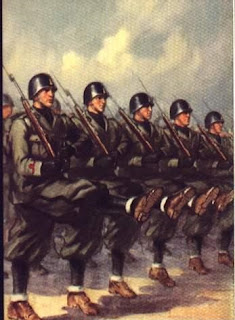 The Black shirted militia of the Italian Fascist Party of Benito Mussolini had its origins in the nationalist groups of war veterans in the aftermath of World War I. Their military inspiration came from the Arditi, the elite assault troops of the Italian army, many of whose symbols they adopted as their own. In a way, they predated the Fascist Party itself which, under Mussolini, was formed to provide a structure and a program for what these groups, known as Action Squads, had already been fighting for. The first of these Action Squads were formed immediately after World War I ended and Italian veterans saw their country slipping into chaos, the rewards they had been promised denied them and a rise in communist subversion. In 1919 they were organized as a part of what was originally known as the ‘Fighting Fascists’ which, in 1922, officially became the National Fascist Party. They wore black shirts and spent their time fighting communists, socialists and others they regarded as a threat to the Italian nation.

On February 1, 1923 the Action Squads were formally renamed and reorganized as the MVSN or ‘National Security Volunteer Militia’, effectively the private army of the Fascist Party. Because of the later “Pact of Steel” and Axis alliance many have been tempted to draw parallels between them and elements of the Nazi Party in Germany, often comparing them, unfavorably, to the Nazi SS. However, to do so is to misunderstand the entire nature of the MVSN which, if we have to compare them to something in the Nazi Party, would have been more similar to the SA rather than the SS. The MVSN was not nor was it ever intended to be an elite guard but rather as a national, political militia as its title implies. After Mussolini came to power the MVSN became an official part of the establishment, often referred to as the fourth branch of the armed forces, consisting of members of the Fascist Party who were often too young or too old for regular military service.

The MVSN had its own organization and its own rank structure, both based on the old Roman army with legions, cohorts, centuries and so on rather than regiments, battalions and companies. As part of the Fascist Party, Mussolini considered them to be his own, however, after the MVSN became part of the established power structure Blackshirt units often found themselves commanded by former army officers who were more royalist than purely Fascist in their ultimate loyalty. Their nominal supreme commander was, of course, Mussolini who held the rank of “First Corporal of Honor”, the rank of “Corporal of Honor” being an honorary rank for important people, Hitler was given such an honorary rank after the regimes became allies. However, after becoming part of the armed services, members of the MVSN were required to swear allegiance to the King of Italy rather than to “God and the Italian homeland” as they had in the past. They also found themselves with little to do as an internal security force as the regular police and Carabinieri already had that job under control.

This then led to the MVSN being used as an auxiliary military force rather than simply being used in political displays at home. In 1923 the first Blackshirts were sent to Libya as part of the pacification campaign against Senussi rebels who were attacking Italian colonists; the Islamic terrorists of the day. Of course, they still acted as reserve security personnel at home and a special unit served as the official bodyguard of Mussolini, known as the ‘Musketeers of the Duce’. Again, however, these should not be compared to the SS Adolf Hitler Life Guards of Nazi Germany as the ‘Musketeers of the Duce’ was effectively a ceremonial guard with membership being handed out as a form of recognition for prestigious party members. To have your most elite warriors guarding the leader of the country, as in the LSSAH, would have seemed rather a waste in Italy. Other MVSN personnel were also trained for special duties such as those tasked with anti-aircraft defense starting in 1927.

1930 saw MVSN legions attached to army divisions, who they would depend on for support facilities and they saw their first really large-scale combat with the outbreak of the Second Italo-Abyssinian War in 1935 following an Ethiopian attack on an Italian outpost. Mussolini hoped to make the war a showcase for his Fascist troops and the MVSN was set to play a major part in the campaign with overall field command of the war being entrusted to the veteran general and MVSN leader Emilio De Bono. However, General De Bono waged a slow and cautious campaign and, considering the economic sanctions placed on Italy by the League of Nations, this was something Italy could not afford as the League was counting on the Italian economy collapsing and perhaps bringing down the Fascist regime before the formidable task of taking and pacifying an area as immense as Ethiopia could be achieved. So, Emilio De Bono was promoted to Marshal of Italy and replaced with General Pietro Badoglio who waged a much more aggressive, if more costly, campaign that brought rapid success. Within seven months Ethiopia was conquered and Mussolini proudly announced the birth of a new Roman empire with Vittorio Emanuele III raised to the status of “Re-Imperatore”. 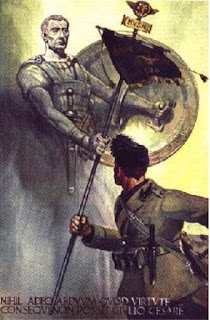 With this victory and the first battlefield test for the MVSN the legions were demobilized and the militiamen sent home. However, that same year, Spain erupted into civil war and the leader of the nationalists, Francisco Franco, immediately called on Mussolini for help. The Kingdom of Italy would contribute the largest number of foreign forces to the Spanish Civil War and the MVSN was the first source of recruits for the Italian volunteer forces sent to aid the nationalists in Spain. Although not fighting in their own legions, the MVSN forces in the “Volunteer Troops Corps” saw extensive service in Spain and suffered heavy causalities. 1937 saw the formation of the first Blackshirt divisions, in Spain, though they eventually had to be amalgamated due to the losses they suffered in vicious combat, eventually forming mixed Italo-Spanish units before the final victory of the nationalists in 1939. Shortly after the war, when the self-appointed “King” of Albania defaulted on his considerable debts to Italy, Albania was occupied by Italian forces and the first Albanian Fascist Militia was formed. Four regular MVSN divisions were also sent to Libya with the rising threat of war.

When the Kingdom of Italy entered World War II in 1940 the MVSN saw action on every front. The French Alps, Libya, Egypt, East Africa, Greece, Yugoslavia and Russia, the MVSN participated in every campaign. In Italian East Africa local units were raised and after the conquest of Yugoslavia there were additional units established for foreign fighters, particularly the Croatians. However, the British counter-offensive out of Egypt practically wiped out the Blackshirt legions in north Africa and the few in East Africa were, of course, lost with the eventual Allied counter-offensive. Those that remained were mostly detailed to garrison duty in Greece and Yugoslavia and it was in the former Yugoslavia that they became involved in the bitter partisan warfare that characterized that region. There were also the Blackshirts who were sent to Russia but it was also determined that some reorganization was in order to form a hard-core from the MVSN that would be the equivalent of the German Waffen-SS rather than the “weekend warriors” that the Fascist militia had generally been. The result was the “M” Battalions.

It was on October 1, 1941 that the “M” Battalions were officially established. These were the “cream of the crop”, the elite troops of the MVSN, taking the best and most experienced elements, originally drawn mostly from the best veterans of the hard, bitter fighting in Greece. They also had an ideological commitment to Fascism that was brought to the forefront in the vicious fighting against communism in the Soviet Union and the former Yugoslavia. The “M” Battalions fought mostly in these theaters, though some were given special training for the invasion of Malta which, of course, was never ultimately attempted. A special guard division within the “M” Battalions was also formed that was equipped with 24 tanks and 12 self-propelled guns (“tank destroyers”) from Germany which were much more effective than most Italian models. However, that division was not formed until June of 1943 and the following month saw the Allied invasion of Sicily (which saw the death of MVSN General Enrico Francisci) and the dismissal of Mussolini by King Vittorio Emanuele III, his replacement by Marshal Pietro Badoglio, the armistice with the Allies and the German occupation of much of Italy.

That was the end of the MVSN as an organization of the Kingdom of Italy, the organization being officially abolished by the royal government on December 6, 1943. A few days later, on December 8, there was, though, a successor organization formed after the establishment of the German-backed Italian Social Republic in northern Italy. This was the Republican National Guard (GNR) which grouped together all pro-Fascist security personnel loyal to Mussolini. They were engaged mostly in the bitter and often merciless anti-partisan warfare behind the front lines. The following year saw the Fascist Party revert back to the old Action Squads of their earliest days as the desperate war situation had by then left only the most fanatical, die-hard Fascists in the ranks, still supporting the dying regime. These Blackshirt remnants held out until the final surrender of the Axis forces in Italy in 1945.
Posted by MadMonarchist at 11:52 PM