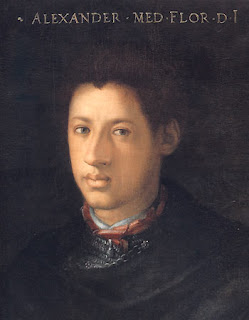 One of the most unfortunate members of the Medici family to rule over Florence was Duke Alessandro, the recognized only son of Lorenzo II de‘ Medici. There has been some speculation as to his actual parentage and the identity of his mother is not known for certain at all. In any event, he was the recognized son and heir of Lorenzo II, Duke of Urbino which, as far as the law was concerned, is all that matters. He was born on July 22, 1510 but though he was the first to come to rule Florence based on heredity, as a monarch, that did not happen immediately after the death of his father in 1519. Rather, power effectively passed to the Medici who held the highest office of all Pope Clement VII who appointed Alessandro’s cousin, Ippolito de’ Medici, to rule Florence on his behalf. It was also Pope Clement who had arranged the marriage of Alessandro’s (legitimate) half-sister Catherine to King Henri II of France. Many accounts describe Alessandro as unprepossessing but not in a flattering way and he was the focus of a great deal of criticism both from within his own family as well as the republican and overall anti-Medici forces in Florence. 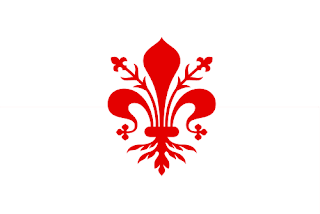 The papal representatives sent to oversee the boy were extremely unpopular with the anti-Medici faction as well as, again, elements within the family such as Clarice Strozzi, daughter of Piero di Lorenzo (“the Unfortunate”), who railed against Alessandro as being unworthy of the Medici family name and against his papal guardians as well. There would also been tensions between the cousins, Alessandro and Ippolito, when, later in life, Alessandro caught Ippolito in the arms of his half-sister Catherine as the two had a forbidden romance which was ended with her being sent to France and Ippolito into the service of the Church. The status of Alessandro as Gran maestro of Florence was largely nominal but wider events taking place in Italy would soon see him raised to a higher status but not before enduring quite an ordeal. For the time being, the power of Pope Clement VII kept him safe at home but the threat of an alliance between the Pope and the King of France invited the opposition of the formidable German Emperor Charles V, also King of Spain, who dispatched a powerful Spanish-German army to invade the Papal States and attack Rome to ‘teach the Pope a lesson he would never forget’.

That campaign culminated in the 1527 “Sack of Rome” which must rank as one of the most horrific acts of rampant savagery and horror in all of human history. The accounts are numerous and often too lurid to repeat such that the imagination itself would be overwhelmed in describing the barbarity that occurred. The Emperor himself, who was not present of course, was shocked but not so shocked as to fail to take advantage of the situation and force the Pope into submission. Likewise, in the city of Florence, the anti-Medici elements saw the sacking of Rome and the violent destruction of the power of the Pope as their great moment of opportunity. They took to the streets shouting slogans and singing songs in thanks to the downfall of the Pope. The papal envoy, Cardinal Silvio Passerini, took the Medici family and children, Alessandro as well as Ippolito, but leaving little Catherine behind for some reason, and quickly fled Florence for safer environs. An effigy of Pope Clement VII was torn to pieces in the street and a republican government was restored under a new anti-Medici leader. 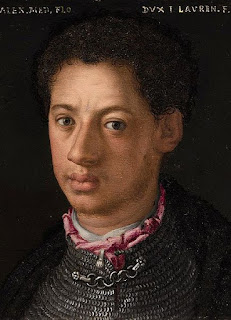 This was not the first time that the effort at a Medici monarchy had been undone by a republican restoration in Florence (Piero di Lorenzo had presided over that dubious honor) and those with cool heads did have reason to hope. They had only been overthrown, after all, because the imperial troops had conquered Rome but the fact was that Pope Clement VII was still alive and, after having been put in his place by the Emperor, would have what amounted to German support rather than opposition so long as he did nothing to displease Hapsburg monarch. Indeed, Florence was never far from the thoughts of Pope Clement VII and as soon as he and Emperor Charles V concluded the Treaty of Bologna by which the Pope absolved the imperial forces for their actions in Rome, agreed to crown Charles V “Emperor of the Romans” by his own hand and, it went without saying, promising again not take sides with the French against Charles. In return, the Emperor gave the Pope territory taken from the Republic of Venice and agreed to help restore the Medici family to power in Florence.

That was good news for Alessandro, but he looked likely to have been in for a soft landing in any event as Emperor Charles V had entertained another ducal throne for him. The Sforza Duke Francesco II of Milan had been appointed to that position by the Emperor when the Emperor’s Spanish forces had driven out the French in the Italian Wars. However, Francesco II had turned against the Emperor in the latest unpleasantness, allying with Florence, Papal Rome, the French and so on. As a result, once his forces were victorious, the Emperor had considered placing Alessandro de’ Medici on the ducal throne of Milan but the Republic of Venice objected to the idea and, after paying the Emperor a considerable bribe, Francesco II was allowed to return. So, it was back to Florence after all for Alessandro but he would have an equal rank anyway. First, of course, was the detail of actually taking the city which was the last of the Italian states still holding out in opposition to the Emperor. 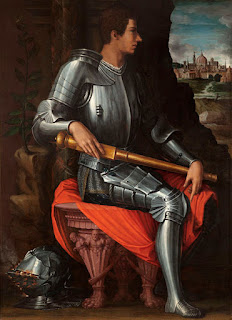 The siege of Florence began on October 24, 1529 with the German, Spanish and assorted Italian forces paid by the Pope all under the command of the Prince of Orange set to work building fortifications, bringing up artillery and shelling the city. The republican forces were considerable but not in the best frame of mind. Many of the well-to-do citizens had fled at the first sign of trouble and a number of the troops employed by the Florentine government deserted rather than face the imperial forces. After a time a relief army tried to come to the aid of Florence but was defeated by the Prince of Orange (though he was killed in the battle) and the fate of the city was sealed. On August 10, 1530 the city surrendered and the restored republic was promptly dismantled. For Alessandro de’ Medici it was his moment of glory, returning to power and being given the title “Duke of Florence” by Emperor Charles V. His enemies were executed or exiled, at least the most vocal and prominent ones, and the future looked promising for the frizzy-haired nineteen-year old. In fact, his uncle the Pope had also bought for him the title “Duke of Penne” from Charles V and hoped that he might pull off another advancement for the House of Medici by marrying Alessandro to the Emperor’s illegitimate daughter Margaret.

At first, Duke Alessandro acted with the advice of elected councils, trying to calm the nerves of the defeated republicans. However, he soon showed that he was not about to forget all that had transpired. He disarmed the populace, confiscating all weapons even if they were purely ornamental, and build a large new fortress to help ensure that he would not be chased out of town again. The large bell which had symbolized the republic in Florence (Americans might think of it as being in the same vein as the Liberty Bell in Philadelphia) was melted down and, you have to love this, cast into medals showing the figures and symbols of the House of Medici. The republican opposition, needless to say, became increasingly furious and just exactly what sort of man Duke Alessandro was depends almost entirely on whose side of the story you choose to believe. 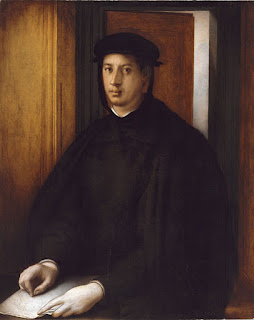 Some wanted to assassinate him but the fear of another war which might be sparked by such a thing dissuaded the hot-heads and so the enemies of the Duke decided to send a representative to Emperor Charles V to implore him to give Florence justice by removing the man he had just set over them. To carry out this mission they chose Alessandro’s own cousin, with whom he was constantly feuding, Ippolito, by then a cardinal. However, he had not gone far when he fell ill and died which, of course, many attributed to poison given to him by Duke Alessandro. In any event, other delegates were dispatched and they made their case to Emperor Charles V. They described Alessandro de’ Medici as the most horrible tyrant, trampling their rights, killing their men, raping their women and just about every crime one could imagine. However, that Charles V might hear both sides of the story, one of Alessandro’s advisors, Francesco Guicciardini was on hand to paint a very different picture of the Duke. He said that he would not try to make reply to every horrific accusation made by the complainants, “but His Excellency’s virtue, his fame, the opinion of him held throughout the city, of his prudence, of his virtuous habits, are a sufficient reply”.

Historians have, themselves, debated which image of Alessandro is more correct. Emperor Charles V, if deemed a sufficient judge of character, seems to have found no merit in the accusations made by the critics of Alessandro. Not only were their charges not accepted but the Emperor fulfilled the wish of the late Pope Clement and agreed to have his fourteen-year old daughter Margaret married to Duke Alessandro; an illegitimate Hapsburg for an illegitimate Medici. The two were married in 1536 and, based on her later life, she might have been just the sort of woman Alessandro needed. However, the two would not have a long, married life together. As far as his private life was concerned, Alessandro had one mistress who gave birth to his three children, and was allegedly lured away by the promise of a romantic rendezvous with a famously beautiful widow, Laudomia, by her brother, Lorenzino de’ Medici (a distant cousin of Alessandro) who then assassinated Alessandro on January 6, 1537. He was only 26-years old but had lived quite a colorful life. Lorenzino said he had done the deed to restore the republic but, if genuine, it certainly did not work and he was killed in Venice several years later. 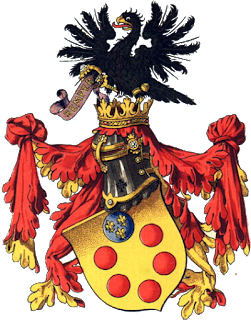 The ducal throne passed to Cosimo I de’ Medici, son of the famous “Giovanni of the Black Bands” who had died fighting against the imperial invasion on behalf of Pope Clement VII and the Italian states. The recently married and recently widowed Margaret of Austria was promptly married to the Farnese Duke of Parma (grandson of Pope Paul III) the following year. She was later put in nominal control of the Netherlands by her half-brother King Philip II of Spain and had he taken her advice might have averted rebellion there. As for Alessandro de’ Medici himself, again, an assessment of him is difficult as the most prominent accounts of him come from his enemies who describe him as harsh, incompetent and licentious yet this is to be expected. Historians, trying to take a more impartial view have argued back and forth as to what sort of man he really was with some concluding that he was a much better ruler than his detractors have claimed. However, he was certainly significant as the first Medici to be Duke of Florence and though his time in power was tumultuous the Medici would go on to solidify themselves and ultimately unite the surrounding region into the Grand Duchy of Tuscany.
Posted by MadMonarchist at 7:38 AM