King Odoacer in the Roman System 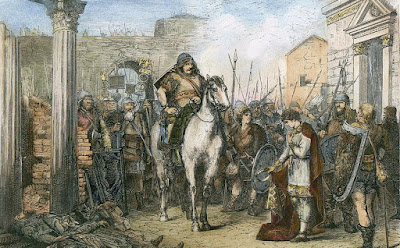 It was on this day in 476 AD (according to some sources anyway) that Odoacer was proclaimed by his soldiers as the first “King of Italy”. Such a proclamation, needless to say, did not actually make him the King of Italy but such was finally accomplished when the last Western Roman Emperor, Romulus Augustulus, was forced by Odoacer to abdicate. This was a case of recent history repeating itself as Odoacer was the top military commander of Emperor Romulus, a boy who had been placed on the throne by his father Orestes who had been the top military commander of Emperor Julius Nepos, whom he had overthrown and driven into exile in the east. That being the case, in order to add legitimacy to his rule of Italy, King Odoacer enlisted the support of the exiled Emperor Julius Nepos and received it and so based his authority on the recognition that he ruled Italy on behalf of the absent Emperor. This reveals how Odoacer fit in to the remnants of the Roman imperial system, even though he was himself not a Roman. Historians have never come to an agreement on what exactly his ethnic background was but do agree that he was a barbarian and not an Italian.

Aiding Odoacer was the fact that the young Romulus Augustulus had never received widespread recognition for the legitimacy of his rule (which was actually the rule of his father Orestes). Beyond central Italy, few regarded Romulus Augustulus as the rightful emperor. King Odoacer tried to strengthen the legitimacy of his rule by obtaining the recognition of as many established authorities as possible, such as the exiled Julius Nepos, the Eastern Roman Emperor Zeno and, of course, the Bishop of Rome who was at the time Pope St Simplicius. King Odoacer was a Christian, an adherent of the Arian heresy which was widespread in those days. Pope Simplicius had long been known for his opposition to the Eutychian heresy at the Council of Chalcedon. Keeping in mind that most of the latter Western Roman Emperors had not ruled from Rome itself, the administration of the Eternal City had effectively fallen to the Pope and King Odoacer made no effort to interfere with this existing system, other than a few administrative changes, he effectively left Pope Simplicius to carry on as before while he focused his attention on consolidating and expanding his Kingdom of Italy.

In this, he was rather more successful than he is usually given credit for. Through diplomatic means alone he gained the island of Sicily from the Vandal king Gaiseric and in 480, when Julius Nepos was murdered by two of his servants, King Odoacer launched a military campaign on the pretext of apprehending and punishing the assassins which saw the reach of his Kingdom of Italy extended all throughout the region of Dalmatia, effectively making the Adriatic an Italian lake once more. Almost immediately thereafter he was also enlisted in a plot against the Eastern Emperor Zeno led by Illus, the Eastern Emperor’s top military commander in a repetition of events in the west. Odoacer was not too concerned with what became of Zeno but seized the opportunity to conquer to territories then being held by the Eastern Emperor, in the area of what is today Austria. Oddly enough, the territories which Odoacer extended his rule over at the height of his Kingdom of Italy is almost identical to those which British prime minister Churchill offered to Mussolini in an effort to influence him to abandon the Axis and join the Allied side at the start of World War II.

If Odoacer was not terribly concerned about Emperor Zeno, Zeno was certainly concerned about him and endeavored to save himself by turning his barbarian vassals against each other. Needless to say, he immediately withdrew his recognition of Odoacer’s rule over Italy and invited another barbarian chieftain, Theodoric the Goth, to invade Italy and receive imperial recognition of his rule if he could defeat and overthrow Odoacer. So it was that King Theodoric and his Goths invaded and came pouring down the Italian peninsula, forcing Odoacer, as other barbarians had forced the Western Roman Emperors before him, to take refuge in the fortified coastal city of Ravenna. The Goths soon attacked and in 493 the city surrendered after which Odoacer fell victim to a murderous plot. King Theodoric, thereafter known as Theodoric the Great, invited him to a banquet as a show of reconciliation and friendship. Odoacer, unfortunately, accepted the invitation only for Theodoric to poison his food and Odoacer, King of Italy, died on March 15, 493.
Posted by MadMonarchist at 12:54 AM