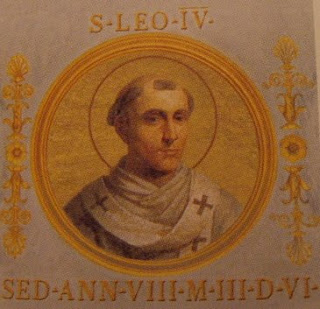 Everyone today will certainly be aware of the waves of Muslim peoples moving into Europe from Africa and the Middle East. Italy has been greatly impacted by this with huge numbers of people coming ashore on the southern islands, depending entirely on the Italian tax-payers for support. This is, of course, not the first time that large groups of Muslims have come into Europe and Italy in particular. In the past they came armed for battle but were met by Italian and other European Christians ready to defend themselves. Today that seems unnecessary given that they are being taken in willingly. This has become part of a larger, global narrative of people from poorer countries fleeing to wealthier countries, almost exclusively Western Europe and North America. Pope Francis has been rather outspoken on the subject that these Muslims should be accepted into the European countries and, while on a visit to the United States, called building walls to protect national borders something that a true Christian would not do. This would, however, put the Holy Father at odds with his saintly predecessor Pope Leo IV.

Elected in 847 AD, Pope Leo IV was a native Roman and reigned during a time of great danger for Italy and Christendom as a whole. By this time, Muslim armies had come out of the deserts of Arabia to invade and conquer the Middle East, all of North Africa and were well advanced into Spain. The island of Sicily, for example, had been conquered and made into a Muslim emirate for almost twenty years when Leo IV came to the Throne of St Peter. That same year, 847, saw the Islamic conquest of Bari in Apulia and the establishment of the Emirate of Bari. Muslim raids on Italian coastal towns and cities were a frequent occurrence and the Eternal City of Rome was not immune from danger. Most worrisome to the Pope was the number of people who, in return for special treatment for themselves, aided the Saracen invaders in making war and pillaging the lands of their fellow Italians in rival cities. The year before his election, Muslim invaders had sailed up the Tiber River and pillaged the outskirts of Rome itself, desecrating the churches of Old St Peter's and St Paul's Outside-the-Walls. Further damage was prevented only by the still standing Aurelian Wall, built in the Third Century by the Emperor of Rome.

Pope Leo IV thus began his pontificate with cleaning up after this attack and trying to improve the defensive fortifications of the city as best he could while also trying to organize an Italian coalition to drive out the Islamic invaders. Gaeta was already under siege at the time of his election and when the Muslims moved against Portus it was Pope Leo IV who called for the Italian cities known for their naval forces to come together in defense of Italy and Christendom. Naples, Amalfi and of course Gaeta answered the call and an effective Italian fleet was assembled, including papal vessels from Rome, that was led by Caesar of Naples (son of Duke Sergius I) who won a dramatic victory over the Muslims in the 849 Battle of Ostia. Pope Leo IV had come out to see the fleet off, give them his apostolic blessing and to say mass for the Italian sailors. His prayers certainly seemed to be effective as a storm erupted during the middle of the battle which split the Saracen fleet and enabled the Italians to win the day.

This was a great offensive victory but, as mentioned, Pope Leo IV did not neglect defensive measures either and so it was he who had built a massive new wall forty feet high with towers at intervals of 'an arrow shot' completely around the Vatican hill, covering some three kilometers to enclose that part of the city not protected by the Aurelian Wall. The Castel Sant Angelo (the tomb of Emperor Hadrian) stood at one end as the primary fortress and strong point of the new fortifications. The Pope employed his own laborers as well as local builders and even Saracens who had been taken prisoner at the Battle of Ostia. Donations, funds from the papal treasury and a donation from the Frankish monarch funded the project. The end result was what has become known as the Leonine Wall which was a success in that Rome was never victimized by Muslim forces again. The area enclosed by the wall is also sometimes known as the Leonine City. This was also, it might be mentioned, the area originally offered to Pope Pius IX by King Vittorio Emanuele II as a papal state after Rome became part of the Kingdom of Italy but the offer was rejected by the Pope.
Posted by MadMonarchist at 3:15 AM