The Knights of St Stephen of Tuscany 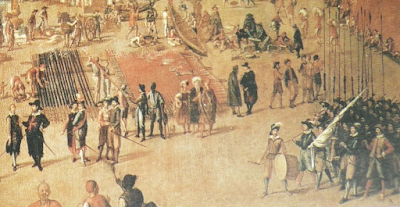 In the old days of Christendom, there were religious military orders subject to the Roman Pontiff, such as the Templars, as well as religious military orders subject to a particular dynastic house. One of these was the Order of St Stephen of the Italian Grand Duchy of Tuscany. Officially, the “Holy Military Order of St Stephen Pope and Martyr”, it was founded on October 1, 1561 by the first Grand Duke of Tuscany, Cosimo I de’ Medici with the permission of Pope Pius IV. This could be seen as part of the normalization of the transition in Tuscany to monarchy, away from the city-state Republic of Florence, taking on more of the trappings associated with monarchy as Florence became the seat of power of a hereditary Grand Duke rather than a republican leadership. The order was named for Pope St Stephen the Martyr because his feast day (August 2) corresponded with the victories that Grand Duke Cosimo had won at the Battle of Montemurlo (August 2, 1537) against republican insurgents who wanted to restore the Florentine republic and the Battle of Marciano (August 2, 1554) in which the Medici grand duke had conquered the city-state Republic of Siena.

Grand Duke Cosimo had actually been trying to establish such an order for some time and more than one attempt was thwarted by Church opposition, largely for political reasons which was typical of the period in which Italy was divided among feuding states. That, however, finally changed with the reign of Pope Pius IV who was a Medici. The primary purpose of the order was to combat the Islamic pirates who were raiding the Mediterranean at will and who had increasingly threatened the Tyrrhenian Sea where Grand Duke Cosimo had built a new, modern port at Livorno. He also wished to demonstrate his support for the cause of Christendom and to unite his people, including the more recently conquered regions such as Siena and Pisa, against a common, non-Italian and non-Christian enemy. The Grand Duke also hoped it would add prestige to his newly established grand duchy, standing alongside other dynastic orders and adding fame to the name of Tuscany and the House of Medici for fighting on the front-lines against the forces harassing Christendom. 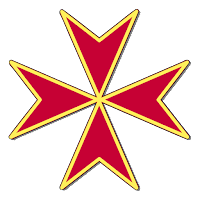 Based on the religious rule of St Benedict, the order took as its symbol a red eight-point cross on a white background, incorporating the red and white colors of Florence, with a heraldic lily flower in between the arms of the cross, again using a symbol associated with Florence as well as that of the House of Medici due to their ties with the Royal House of France. Grand Duke Cosimo served as the first Grand Master of the order and, as it was a dynastic order, this would be passed on to every subsequent Grand Duke of Tuscany. The headquarters of the order were originally in Portoferraio but later moved permanently to the city of Pisa where one can still find the magnificent Palazzo dei Cavalieri and the church of Santo Stefano dei Cavalieri. The knights focused primarily on coastal defense but also took the fight to the enemy in cooperation with larger allies. The first of three, broad “campaigns” that the Knights of St Stephen fought was done in cooperation with the Spanish in their fight against the Ottoman Turks in the Mediterranean.

The Knights of St Stephen, with their own war galleys, fought alongside the Spanish (and other allied Italian states) at the siege of Malta in 1565 and the Battle of Lepanto in 1571. They also participated in the attack and capture of Annaba in Algeria in 1607 under Admiral Jacopo Inghirami in which the city was devastated. This phase in their campaigning was, such as at Malta and Lepanto, defensive and focused on stopping major Turkish offensives against southern Italy. However, once that was done, low level harassment on the part of Turkish and, more often, Barbary pirates remained a problem and the Order of St Stephen focused its second campaign on dealing with this problem. They also concentrated on areas closer to home with raids on the Turkish-held islands of the Aegean as well as launching attacks on Islamic forces in Dalmatia, Negroponte and the island of Corfu. These were successful enough that offensive military operations by the Knights of St Stephen decreased, their last major campaign, coming around the year 1640, during the reign of Grand Duke Ferdinando II, focused on coastal defense and aiding the Republic of Venice in their on-going struggle against the Ottoman Empire.

The year 1719 saw the last time that the Order of St Stephen was used in combat by Grand Duke Cosimo III. Later, in 1737, a major change came when the House of Medici was supplanted by the Austrian dynasty of Hapsburg-Lorraine. The second Hapsburg grand duke, Pietro Leopoldo I, formally ended the military aspect of the order and reorganized it as an order that would focus on education for the elites of Tuscany. It became more a feature of social status and no longer an order focused on war and military defense. The Order of St Stephen lost its fighting capacity under the Hapsburgs but things soon became even worse. In 1791 Emperor Leopold II abdicated the throne of Tuscany in favor of his son Ferdinando III who has the dubious distinction of being the first monarch to recognize the revolutionary First French Republic. However, that was not enough to save him. French expansion continued and the Austrians eventually agreed to hand over control of northern Italy to the French Republic in exchange for half of the territory of neutral Venice. The Grand Duchy of Tuscany was occupied by the French, the Grand Duke was forced to abdicate and the Order of St Stephen was suppressed.

Thankfully, that situation did not endure. In due time Napoleon was defeated and the Grand Duke of Tuscany was put back in his place in 1814 and, the following year, the Order of St Stephen was restored. It was, however, restored in its reformed form, not a military order but became more of a sign of favor with the grand ducal family. The French experience also seemed to have an affect on the Italian populace as so many years of division, feuding and foreign rule or foreign occupation prompted the growth and spread of a new Italian nationalism. It was an unfortunate period for the Grand Dukes of Tuscany, who were good men of good motives and intentions but their natural inclination to support their Austrian relatives was not matched by their subjects and many deserted the forces of Tuscany to join the Piedmontese and the Italian national movement in fighting to expel the Austrians from Italian soil. Grand Duke Leopold II, a noble and tragic figure, made the mistake of so many of his contemporaries in granting constitutional government, only to later revoke it and he was forced to abdicate. Grand Duke Ferdinando IV, his successor, ruled for only about a year before he too was forced out in 1859 by the Italian nationalists. In 1860 Tuscany was formally annexed to the Kingdom of Italy.

Neither the Kingdom of Italy nor the current Italian republic officially recognize the Order of St Stephen, though it does still exist but as a purely private organization under the leadership of the Hapsburg-Lorraine heirs of the former grand duchy. Prince Sigismund, Archduke of Austria, is the current Grand Master and the order is considered, by the Catholic Church, as a “public association of the faithful” with historic papal foundations. The Knights of Malta still recognize it but membership is extremely limited, mostly to close friends and family. One must have extensive documented proof of aristocratic ancestry to even be considered for membership and the costs required, as with most such orders today, ensure that only quite wealthy people could ever hope to be invited. Nonetheless, what exists today is a valuable reminder of what a glorious and formidable military-religious order the Knights of St Stephen once were and one can still see their educational facility and naval war college in Pisa, a testament to their past as one of the major forces on the front lines of defending Christendom in the Mediterranean area.
Posted by MadMonarchist at 11:13 AM