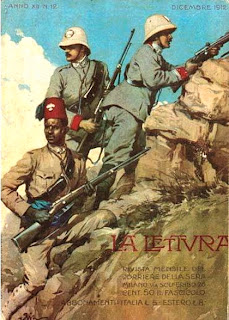 The battle of Adowa is one of the most famous yet often misunderstood battles fought by Italy on the continent of Africa. Usually Italy is portrayed as the aggressive would-be conqueror and the Ethiopians as the hapless, innocent victims of foreign imperialism. As with most things, the truth is neither. The First Italo-Abyssinian War was the result of a misunderstanding and it was Ethiopia that made the first move. Moreover, Adowa was the one major defeat in a war which had previously been dominated by Italian victories. Prime Minister Francesco Crispi, with the support of King Umberto I, had been anxious to ensure that Italy was not totally left out of the colonial race going on at that time. Italy was also newly united and had yet to prove herself on the international stage. In contrast, Ethiopia was a complex network of tribes, often at war with each other and nominally under the rule of a “King of Kings” or Emperor but whose actual control over the country tended to be intermittent. In 1869 an Italian company purchased land for a coaling station in Assab Bay and in 1883 sold the territory to the Italian government. This area eventually became the colony of Eritrea. There were clashes with the religious rebels of Mohammed Ahmed, who claimed to be the “Mahdi” or Islamic messiah (basically the Islamic terrorists of the day) in the Sudan as well as clashes with Ethiopians as the Italians moved farther inland.

The nominal ruler of Abyssinia, Ethiopian Emperor Yohannes IV (who had sided with the British in a clash with a previous “King of Kings” in exchange for weapons which helped him seize power) clashed with the Italians but eventually came to terms with them. Meanwhile, one of his leading nobles, Menelik of Shewa, was building up his forces, making use of modern weapons sold to him by the Italians in return for his neutrality during the conflict with Yohannes IV. When the Emperor was on his deathbed he named his nephew, Ras Mangasha as his heir in 1889. In Abyssinia, power rarely changed hands peacefully and the throne usually went to whoever was strong enough to take it. In 1889 it was Menelik who controlled the best land, had the most men and who had the most advanced weaponry. When Yohannes IV died the ruler of Shewa declared himself Emperor Menelik II and negotiated Italian support for his seizure of power. Anxious to avoid being drawn into local conflicts and confident that Menelik was their ally, Italy signed the Treaty of Wuchale on May 2, 1889 by which Rome recognized Menelik as Emperor of Ethiopia in return for which he recognized Italian ownership of Eritrea. Permanent friendship was pledged and trade agreements established, however, confusion over one clause in the treaty would ultimately lead to war.

Article 17 was the cause of the trouble as it was different in the Italian and Ethiopian versions. According to the Italian version Menelik II had basically agreed that Ethiopia was an Italian protectorate. In the Ethiopian version the Emperor had the option to avail himself of Italian protection but no clear obligation to do so. When Menelik II sought agreements with other European powers Italy objected. Emperor Menelik II was offended by this and sent a letter of protest to King Umberto I of Italy. When the King failed to respond satisfactorily, Menelik II repudiated the Treaty of Wuchale, effectively declaring war on the Kingdom of Italy on February 27, 1893. After dealing with the forces of the Mahdi, who clashed with the Ethiopians and Italians alike, the focus shifted to the important province of Tigre. Menelik II, hoping to make an ally out of the man he had displaced, offered the province to Ras Mangasha if he could take it from the Italians. Ras Mangasha pretended to be friendly with the Italians and raised an army on the pretense of fighting the forces of the Mahdi. However, once gathered, he launched a surprise attack on the Italians. Mangasha was defeated but the fight resulted in Italy being drawn into a larger and more risky confrontation.

Major General Oreste Baratieri was dispatched with a large Italian colonial army, most of the rank and file being native African troops under Italian command. He won a number of early victories while Emperor Menelik II spent his time gathering a massive army from across Ethiopia. Both armies fought a proxy war and played for time until they were each forced into a confrontation due to dwindling supplies. The feudal levies of the Ethiopian army could not be kept in the field, inactive for long and General Baratieri was being pushed by the government in Rome for a swift and decisive victory. Baratieri, a veteran of Garibaldi’s red shirts and a respected soldier, suspected treachery and wished to pull back but all of his subordinates insisted on advancing. The two armies moved and came together near the town of Adowa. Italian reinforcements had been dispatched to Africa but would not arrive in time and General Baratieri had no idea of how large an army was massed against him. He had expected, at most, about 60,000 men when in fact Menelik II was able to field over 100,000 warriors compared to only about 15,000 Italian colonial troops. Exact figures are not known but the Italians would be outnumbered at least 8 to 1 by most accounts. 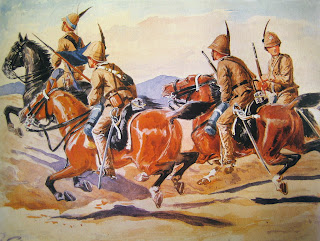 Contrary to popular belief, the Ethiopians were not a purely primitive army. They had Russian military advisors, many warriors carried rifles and his army even possessed some artillery. In some cases, their imported weapons were even superior than what the Italian army had to work with. Deception and trickery were also well utilized by the Ethiopians. Most of the scouts working for the Italians were actually in the employ of Menelik II and he used other means to trick the Italians into thinking his army was mostly dispersed. The Italians had also underestimated Menelik II himself. They had hoped to influence local chieftains against him or to at least secure their neutrality (as they had previously done with Menelik himself) but this time it didn’t work. Menelik II, upon taking the throne, passed what we might call ’tax cuts for the rich’, ending requirements of feudal tribute to ensure the nobility would support him and the vast majority did exactly that. He moved his army forward while the Italians, unfamiliar with the terrain and being fed bad information by their native scouts, stumbled about in the dark and became separated.

As the Italian forces advanced on a night march the units became mixed up, setting back their timetable and a misunderstanding over the name of a certain hill caused General Matteo Albertone, commanding the leading Native Brigade, to advance far beyond the rest of the army. This caused something of a chain-reaction as the next brigade, told to take their place alongside Albertone, also became separated. By the time Emperor Menelik II sent his warriors charging against the enemy on the morning of March 1, 1896 the Italian forces were perfectly placed to be wiped out by the Ethiopians one piece at a time. In terms of the forces engaged, this was almost a purely African battle with the Italians involved being a minority. The African natives of the Italian army fought with remarkable discipline against tremendous odds, holding their positions and delivering devastating volleys of fire that took an immense toll on the attackers. Nonetheless, the Ethiopian warriors were relentless in their ferocity and attacked again and again. As the day wore on the Ethiopians finally overwhelmed the Italians, destroying or routing the entire brigade. General Albertone himself was killed in the struggle, fighting to the death.

Of the four Italian brigades, one was annihilated and another already close to the same fate when General Baratieri realized none of his messages had gotten through or if they had, lack of knowledge of the terrain meant they had not been properly followed. He tried to organize a strong defensive position in the center of his intended battle line but, for the most part, by that time it was too little and too late. Fleeing troops overran these positions with Ethiopian warriors hot on their heels and despite some heroic stands the Italian position began to totally disintegrate. General Vittorio Dabormida, commanding the brigade sent to the relief of Albertone, was trapped and wiped out by Ethiopian forces. Virtually the entire brigade was destroyed and again, the commanding general was among the dead, struck down while using his saber in close combat after being surrounded and overrun by enemy warriors. 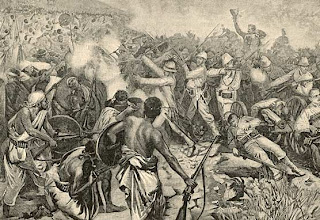 General Baratieri tried to pull off a fighting withdrawal, and some units held off a few attacks, but this proved impossible and soon the entire army, or at least what was left of it, was in retreat. Emperor Menelik II called upon the local population to rise up against his enemies and many more Italians and colonial troops were killed after falling behind, collapsing from exhaustion or becoming lost during the retreat. Thus many men had their throats cut as they lay helpless on the roadside by peasants from nearby villages. Some faced even worse fates. In all the Italians had lost 6,133 men either killed in the battle or slaughtered during the retreat. Another 1,428 were wounded and all 56 pieces of artillery were captured by the Ethiopians. Emperor Menelik II lost about 7,000 men dead and 10,000 wounded; a much greater number certainly but representing only a fraction of his overall strength whereas the Italian losses counted for over half of their total force. Many of the Italian wounded also suffered a more horrific fate, some being killed, some being mutilated as Ethiopians castrated wounded men as grisly war trophies. The African colonial troops often suffered worse as, depending on their origin, many of these men were considered traitors by the Ethiopians and had one hand and one foot cut off so as to make them permanently helpless and, in most cases, doomed to a slow, agonizing death from starvation.

The results of the battle were immediate and dramatic. In Rome the government of Francesco Crispi immediately fell and General Baratieri was wrongly blamed of abandoning his men in disgrace. Fortunately, he was cleared by a court martial but his reputation had suffered irreparable harm. All Italian colonial expansion in Africa was halted for more than a decade and total Ethiopian independence was recognized. Emperor Menelik II made this his only real demand. While others howled for more blood, he realized that provoking an all-out war might have resulted in the loss of his throne and the total ruination of his country. He had gained what he wanted, achieved near god-like status among the Africans and was content to leave well enough alone. He felt himself so superior to his fellow Africans that, when questioned about leading a pan-African movement he said, “I wish you the greatest possible success. But in coming to me to take the leadership, you are knocking at the wrong door, so to speak. You know, I am not a Negro at all. I am a Caucasian.”

That exchange, of course, would be forgotten by those who wished to seize on the battle of Adowa as a symbol of African racial prowess. One thing the battle did was to ensure that the Italians would not underestimate the Ethiopians next time; and Italy was determined that there would be a next time when the defeat of Adowa would be avenged. When the next contest came it would be the Ethiopians who, remembering their victory at Adowa, would tend to underestimate the Italians with disastrous results. The next time the two countries went to war, Italy would be fully prepared, leaving nothing to chance and would see all of Ethiopia conquered in seven months after which King Vittorio Emanuele III was declared Emperor.
Posted by MadMonarchist at 12:47 AM