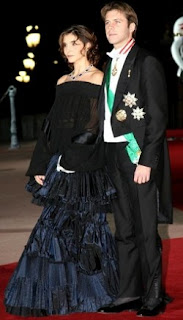 Some troubling news to report from Italy, it seems that the threat of cancer is back again for HRH Prince Emanuele Filiberto of Venice and Piedmont. On Tuesday the eldest son of the last Crown Prince of Italy informed his internet followers that the “Evil has returned. I am in Geneva because tomorrow morning I am working again…This too will pass…” and added, “Thanks for all your messages…give me strength…” The Prince had a tumor removed from his nasal septum last November and thought he was cancer-free but it seems to have returned. Another surgery was scheduled for Thursday. Prince Emanuele Filiberto was the 2009 winner of the Italian version of “Dancing with the Stars” and currently has his own reality show, which (while derided by some) has made him the more well known of the two Italian claimants to the royal legacy of the House of Savoy. Although he has not campaigned for the restoration of the monarchy (being obliged to stay out of Italian politics) he has stated publicly that he considers monarchy a better system than republicanism because of the unity and impartiality that only monarchs can provide. We wish the Prince and the Italian Royal Family all the best and that he has a safe and speedy recovery.