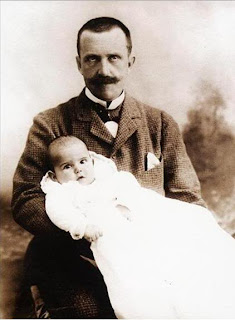 The remarkable woman who would be the last Tsaritsa of Bulgaria was born HRH Princess Giovanna Elisabetta Antonia Romana Maria of Italy in Rome on November 13, 1907 to HM King Vittorio Emanuele III of Italy and Queen Elena of Montenegro. She was their third daughter and fourth child, the next to the youngest. If there was one constant in the upbringing of all the princes and princesses of the House of Savoy, going all the way back to the former Kingdom of Piedmont-Sardinia, it was that the very long history of the dynasty and their duty to further the advancement of the Royal Family was stressed above all things. From her earliest days there was never any doubt that she would be married into a foreign royal family to secure or extend the influence of the House of Savoy and one area which had held Italian interest, practically since the Kingdom was born, was the Balkans. As a child Princess Giovanna was known for being bright, intelligent, compassionate and for her love of music (she played the cello) but all the time she knew it was her destiny to marry a foreign monarch or royal heir for the benefit of Italy and her Royal House. 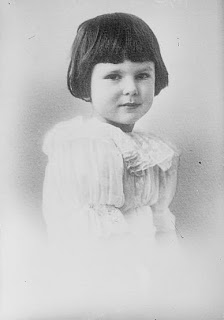 Princess Giovanna spent much of her youth at the Villa Savoia, kept under the watchful eye of a notoriously strict governess. The princess was given an impressive education, learning history, literature, French, English and learning to play the piano. All the royal children were quite beloved in Italy and by Italians around the world. A much commented on incident was in 1923 when Princess Giovanna and her sister Princess Mafalda came down with typhoid and the daily reports on their condition were as greatly in demand by Italian-American newspapers in the United States as those in Italy itself. She grew up to be a remarkably compassionate and dutiful young princess and when it came time to find a suitable husband for her, Italian eyes fell on Bulgaria. There had been other possibilities of course. Some suggested the son of the Crown Prince of Bavaria, others one of the Hapsburg Archdukes and for those who could not abide foreigners there was the Marquis de Pinedo, a famous Italian aviator of daring reputation. He died in 1933 in a crash though and again and again attention returned to Bulgaria where a marriage might serve the House of Savoy and the Kingdom of Italy well in the future. 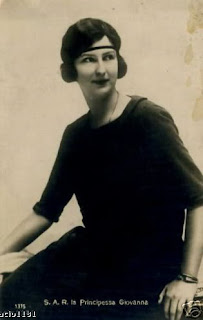 Princess Giovanna and the Bulgarian Tsar Boris III first met in 1927 when the Tsar was touring Europe along with his brother Prince Kyril. According to Princess Giovanna the Bulgarian Tsar barely noticed her on this first occasion but the subject of marriage was later broached between Prince Kyril and the Princess’ sister Princess Mafalda. A few years later, on January 8, 1930, the two met again when they each attended the wedding of Princess Maria Jose of Belgium to Princess Giovanna’s brother Crown Prince Umberto of Italy. A marriage of Italian and Bulgarian royalty was nothing new, Boris’ father, Tsar Ferdinand, had married a princess of the former royal houses of Parma and the Two-Sicilies, however, just as with that marriage, religion was to be a source of difficulty for the staunchly Orthodox Bulgars and the staunchly Catholic Italians. Only recently the Kingdom of Italy and the Roman Catholic Church had been reconciled and the Church was adamant that Tsar Boris III had to agree that any future children be raised in the Catholic faith before they would accept a marriage between him and Princess Giovanna. This was a touchy subject. Boris III himself was supposed to have been a Catholic but, of course, the Bulgarians would have had none of that and he became Orthodox. Pope Pius XI no doubt worried that the same thing would happen again. Once again, a Bulgarian Tsar promised the Pope to raise any future children as Catholics in order to marry an Italian princess (though he refused to sign a contract to that effect) and, again, the Pope agreed and the marriage date was set. 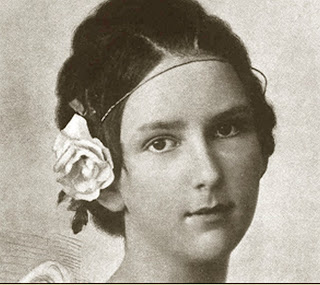 The negotiations had been difficult and at one point talks broke off entirely with Boris III declaring that he would remain a bachelor if he could not marry his beloved Princess Giovanna. The Princess likewise vowed to renounce her royal life and enter a convent if she could not marry the Tsar. So, finally, everything was worked out. The Tsar of Bulgaria and the Princess of Italy were married at the Basilica of St Francis of Assisi on October 25, 1930 amidst a great deal of public celebration. Wedding dresses were simple and conservative and no jewelry was worn but it was still a glittering affair with some 50 royal princes in attendance and, never being one to miss the spotlight, a typically puffed-up Mussolini. After that, the couple departed Italy on the Bulgarian liner “Tsar Ferdinand I” and Giovanna stepped ashore on Bulgarian soil at Burgas. The couple then traveled by train to Sofia where a second, Orthodox, wedding ceremony was held at the St Alexander Nevsky Cathedral where Giovanna took the Bulgarian form of her name and was presented to the public as Tsaritsa Ioanna of Bulgaria. 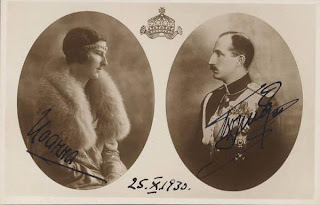 The new Tsaritsa was a very down-to-earth wife, astonishing the world when she revealed that personally cooked meals for herself and her husband, saying how the Tsar loved home cooking and that, “The secret of domestic happiness is to be found in the kitchen”. In 1933 the Tsaritsa gave birth to the couple’s first child, Princess Marie-Louise, and despite the promise Boris III had made to the Vatican, she was, as expected, immediately baptized into the Bulgarian Orthodox Church. The Pope was rather upset at what he called “Balkan tricks” but nonetheless refrained from excommunicating the Italian Tsaritsa who remained a devoted Catholic throughout her life but always extremely reverent and respectful toward the Orthodox faith of her new country. In 1937 there were huge public celebrations, complete with torchlight celebrations, in honor of the birth of an heir to the throne, Prince Simeon. However, the happy mood of the Royal Family could not endure for long as the war clouds continued to gather across Europe. When Adolf Hitler invaded Poland, Britain and France declared war and for the second time in the 20th Century the world came apart in a torrent of death and destruction.

Like the rest of her family, Tsaritsa Ioanna hoped to stay out of World War II though she was naturally concerned about her native Kingdom of Italy (where her relatives likewise hoped to stay out of the conflict). Tsar Boris III is supposed to have said that his wife was pro-Italian, his ministers were pro-German and his people were pro-Russian while he was entirely neutral. However, when Axis troops conquered Yugoslavia and Greece with pro-Nazi regimes put in place in Hungary and Romania there was no hope for Bulgaria to remain totally uninvolved. Under great pressure the Tsar agreed to a limited sort of alliance with the main Axis partners of Germany, Italy and Japan. However, the Tsar and Tsaritsa of Bulgaria were anything but sympathetic to Hitler. On the contrary, they were horrified by his actions and refused to take part in any of his schemes. Risking the wrath of the dictator who ruled most of Europe, they refused to cooperate in the deportation of Bulgarian Jews to Nazi Germany -where they would ultimately been massacred. Tsaritsa Ioanna intervened herself to obtain visas for Bulgarian Jews to escape the danger of Europe to the safety of Argentina. 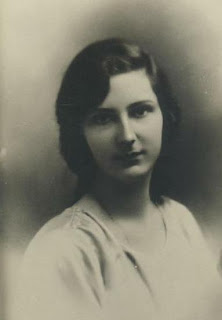 Hitler was furious at how uncooperative the Bulgarian Royal Family was and when the Tsar suddenly fell ill and died in 1943 after a visit with Hitler (in which the Fuhrer flew into a rage when the Tsar refused to participate in his invasion of Russia) many suspected the Nazi leader of having the Tsar poisoned. Tsaritsa Ioanna was grief-stricken and all the more concerned to see her 6-year-old son proclaimed Tsar Simeon II of Bulgaria with three regents to act for him. If his father had been murdered, what fate might be in store for his son if they aroused the anger of the Nazis? However, the ultimate threat was not to come from Germany. The Nazis lost their war and despite Bulgaria not being involved in the invasion of the Soviet Union, Bulgaria was still invaded by the Red Army and doomed to become a Soviet satellite-state. In 1945 Bulgaria was taken over by the Communists, the three regents were murdered and a referendum was staged in order to justify the abolition of the monarchy. With only 24 hours given to them, Tsaritsa Ioanna gathered her children and fled into exile, first with her father, King Vittorio Emanuele III in Egypt and then finally to Spain where Generalissimo Francisco Franco was welcoming to any victims of communist aggression. Later she moved to Portugal to be near her exiled brother King Umberto II of Italy. However, she never ceased to be a Bulgarian queen, having a Bulgarian Orthodox chapel built alongside her residence. 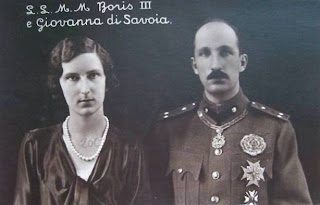 The communists had destroyed the grave of Tsar Boris III but when the Soviet Union collapsed and the “Iron Curtain” came down, Tsaritsa Ioanna returned to Bulgaria in 1993 to reinter the heart of her beloved husband, which had been buried separately and was thus spared from the communist degradation in 1954. It was her last trip to her adopted homeland and she was very warmly welcomed by the Bulgarian people who never forgot the kindness and compassion she had always displayed toward them. She died in Portugal on February 26, 2000 at the age of 92 and was buried in Italy at the Basilica of St Francis of Assisi where she had first married her beloved husband. Throughout her life she had displayed great humanity, heroic compassion, risking her own life to save others and was always the most devoted wife and mother as well as queen. Her memory deserves to be honored and she will always be one of the brightest stars in the history of the Bulgarian monarchy and the Italian House of Savoy.
Posted by MadMonarchist at 10:14 AM