It is unfortunate that the whole issue of the "Roman Question" ever happened and was a dark cloud over the Vatican and the Kingdom of Italy before Church and State finally reconciled in 1929 but it would be wrong for any proud, patriotic Italian to take a negative view of the Papacy because of this. It was the exception rather than the rule in the wider history of Italy and part of the reason why so many were shocked at the opposition of Pope Pius IX to Italian unity was exactly because it had been the Roman Pontiffs who taken the lead in that direction so often in the past. Here are a few examples (though by no means an exhaustive list) of notable Popes who were early leaders in encouraging Italian unity and independence.

One such example was Pope Alexander III, a native of Siena, who was faced by an invasion on the part of the famed German Emperor Frederick Barbarossa. More than that, he also faced an attempt to usurp his spiritual authority as the Emperor appointed his own anti-pope and tried to have Alexander III deposed. Pope Alexander III rallied the city-states of northern Italy, behind the leadership of Papal Rome, to create a coalition of about fifteen cities known as the Lombard League to oppose the German invasion of Frederick Barbarossa. In 1176 at the Battle of Legnano the combined Italian forces of the Lombard League administered a crushing defeat on Emperor Frederick in one of the most famous victories in Italian history. It was also Alexander III who clearly defined the rules for the election of the Bishop of Rome. The Lombard League that he organized was not permanent but it did reform on more than one occasion, sometimes with somewhat different membership, as the states of northern Italy banded together to fight off foreign attacks, usually coming from Germany.

One of the most famous was the Sixteenth Century "Warrior Pope" Julius II, sometimes called 'Julius the Terrible' but they did not mean "terrible" in the sense that we use the word today but more like 'awesome'. During his reign he sought to solidify the Italian peninsula under papal leadership, recovering states the Church had lost previously, and to arrange alliance against the major powers that threatened Italy. Toward that end, throughout his reign he formed several variations of the Holy League with different countries joining and leaving the alliance over the years. His goal and his often-repeated slogan was to "drive out the barbarians" from Italy. He fought constantly to maintain not only Papal leadership in political terms but also to remove the French and the Germans from Italian soil in order to maintain the independence of the Church (he did not want to be reduced to being the German Emperor's chaplain). Many at the time looked at his building projects, his wars and thought that Julius II seemed more than willing to play the part of Julius Caesar as a great Roman champion.

Not long after, in the War of the League of Cognac, the Medici Pope Clement VII did his best to rally the states of Italy behind his leadership, in alliance with King Francis I of France, to repel a German-Spanish invasion by Emperor Charles V. France, Milan, Venice and Rome were the primary allies but Italian patriotic fervor was also revived by the struggle. The people had become extremely tired of their lands being ruined and their sons and husbands being killed by the wars that feuding foreign powers brought to Italy and, for all too brief a moment, there was some hope that Clement VII might have started a truly historic national movement. Niccolo Machiavelli saw promise in the crisis and urged the Pope to call up a national militia of all Italians to replace the armies of professional mercenaries in the hope that this would further encourage Italian unity. The Pope, however, declined that suggestion, as he did not wish to appear bellicose as he wanted to avoid warfare with the Emperor if at possible (which it wasn't). When war did come, real unity proved difficult to maintain and the promised support from France never materialized. Still, Giovanni de' Medici ('of the Black Bands') carried on a brilliant struggle against the invaders and might have pulled off an Italian solo victory had he not been struck by a canon ball and killed. 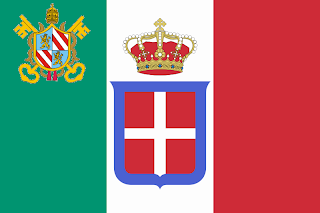 The problem with these early efforts at unification was that the coalitions they were built around proved impossible to maintain. Invariably, local rulers would drop out to join the side of some foreign power that would promise them some special favor. This was part of the reason why it became clear that if real unity was ever to be achieved there could only be room for one government with one monarch. Still, even in the case of Pope Pius IX, there was still a considerable number of people who looked for the papacy to take the lead in the cause of Italian unity, Gioberti being perhaps the most prominent example. When Pius IX was elected to the See of Peter many thought he would be the ideal man for the job and, early on, the Pope gave every indication that this was the case. He had shown sympathy for the Italian nationalists and had spoken in public of the "Italian nation". The Austrian Empire was so nervous that he would be a leader in this area that they planned to use the imperial veto to prevent his election but their cardinal arrived too late. It was not to be however and Pius IX eventually turned against the unification movement. Still, with such a long history of papal support, it would be wrong to view the Church or the Papacy itself as being solidly opposed to the concept and, with the signing of the Lateran Treaty, the two finally came together. It should also be remembered that when the choice between the monarchy and a republic came up after World War II the Church under Pius XII (himself from a "Black Nobility" family) was firmly in support of the monarchy and the House of Savoy. Catholics and monarchists should march together toward the goal of restoration for a united, independent and Catholic Kingdom of Italy.
Posted by MadMonarchist at 9:18 PM