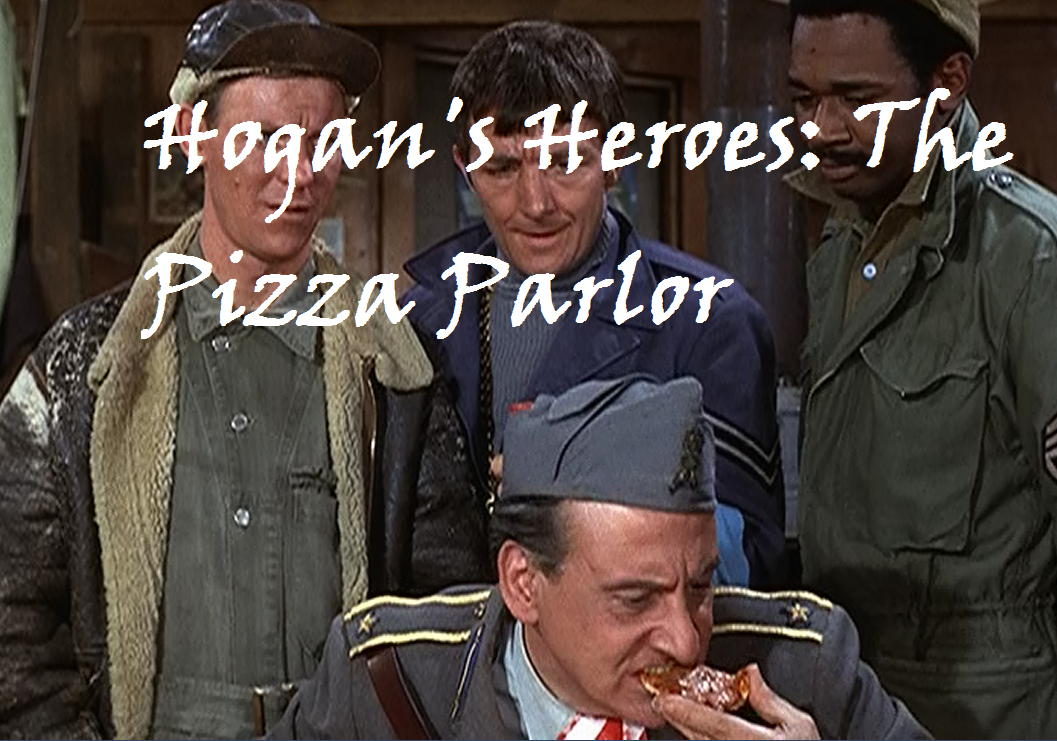 For those too young to remember or those unfamiliar, “Hogan’s Heroes” was an American television comedy set in a German prison camp (Luft-Stalag 13) during World War II. The German officers are totally incompetent and the Allied prisoners basically run the place, outwitting their inept captors at every turn. The main characters are, not surprisingly, Americans with one French and one British member on the team (the pilot also had a Russian character which was dropped in the regular series, also not surprising given that this was the 60’s when the Cold War was in full force). The Allies use Stalag 13 as a base from which to launch guerilla attacks against the Germans and to help Allied personnel escape Nazi-occupied territory. Since they are on a mission, they never escape and since no one has ever escaped from Stalag 13 the hapless commander remains at his post, glorying in his perfect record while the prisoners thwart the German war effort right under his nose. This episode is one of two featuring a recurring Italian character. It is episode 22 from season 1, airing on February 11, 1966 and directed by Gene Reynolds. 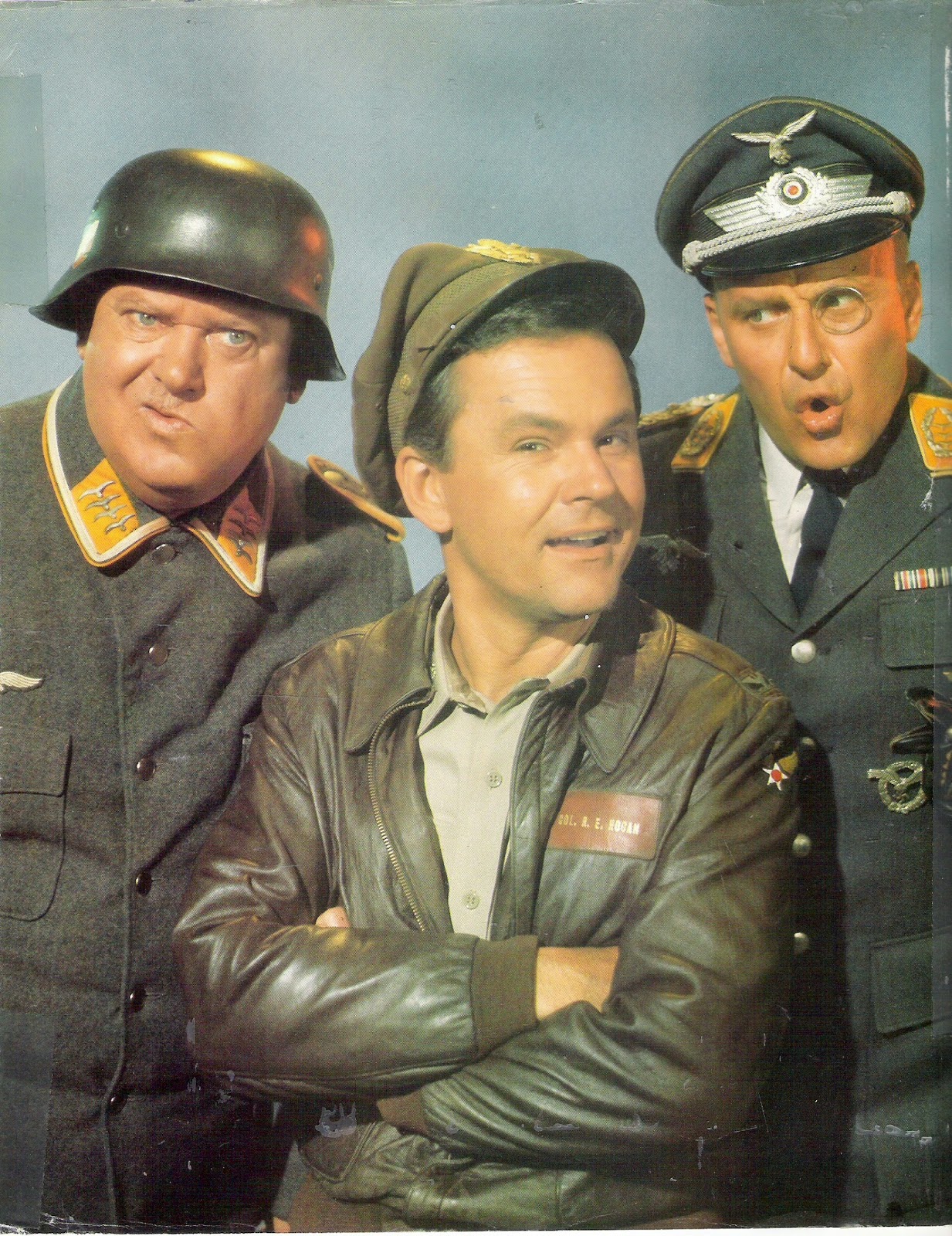 The cast consists of Bob Crane as Colonel Robert E. Hogan, the senior Allied prisoner-of-war and their leader; Werner Klemperer as Colonel Wilhelm Klink, the clueless German commandant; John Banner as the comic Sergeant-of-the-Guard Hans Schultz; Robert Clary as French Corporal Louis LeBeau (their master chef); Richard Dawson as RAF Corporal Peter Newkirk (a London pick-pocket); Ivan Dixon as Sergeant James “Kinch” Kinchloe (the American radio operator) and Larry Hovis as Sergeant Andrew Carter the simple-minded American explosives expert. For this episode the special guest star was Hans Conried as the Italian Major Bonacelli. If it seems odd having an American with a surname like Conried playing an Italian, this was typical for “Hogan’s Heroes”. Most of the actors were Americans but it is interesting to note that every character on the side of Nazi Germany in the series (Colonel Klink, Sergeant Schultz, General Burkhalter) were all played by Jews. It was something like an ‘in-joke’ of the series, one of a number of ‘running gags’ the show was known for. Another one that viewers must be prepared for is the extreme use of stereotypes, especially when it comes to the Axis forces.

“The Pizza Parlor” opens with LeBeau preparing a feast in the barracks only to be interrupted by Sergeant Schultz who tells them that Colonel Klink is coming to inspect them and Colonel Hogan remarks that the Germans have been sending a number of officers to inspect their camp lately to learn from Colonel Klink because of his perfect record of never having had a successful escape. Klink arrives and informs them that Major Bonacelli is due shortly from “Capizzio” to study their security methods for use in his own prison camp. When taunted about telling a foreigner his secrets, Colonel Klink angrily reminds Hogan that, “…the Italians are our allies!” to which Hogan replies, “Don’t remind me, remind them”. A subtle nod to the fact that, at this stage in the war Italo-German relations were not at their most friendly and that many in Italy were never very comfortable about being allied with Germany. After the credits, Allied HQ tells Hogan that tensions between Germany and Italy are high and that the Allies are planning a major landing near Capizzio and that Hogan should try to get some information out of him. Hogan agrees but isn’t too hopeful, imagining Bonacelli to be a rough character. 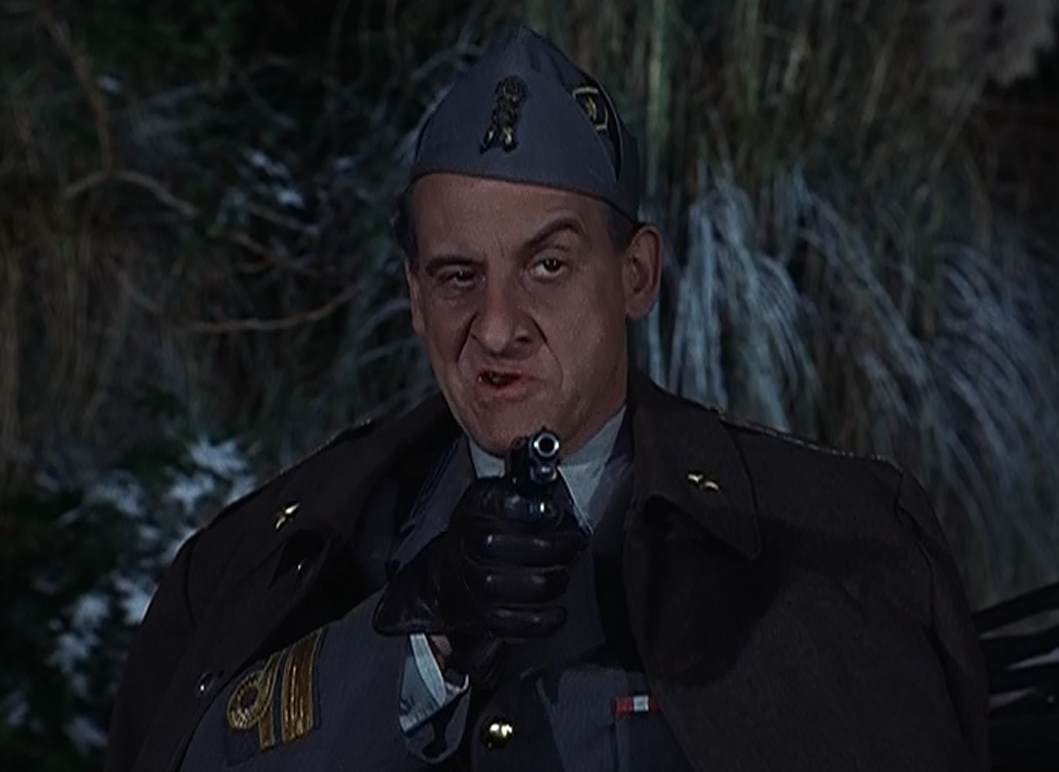 We are then introduced to Major Bonacelli who has pulled a gun on his German driver, trying to force him to take him to Switzerland instead of Stalag 13. He is fed up with the war and just wants to escape. However, an Allied bombing raid sends the driver scurrying for cover and before Bonacelli can get away an escort arrives to take him to camp. After arriving at the camp. Hogan digs him about the Germans pushing the Italians around and notice how Bonacelli grimaces at hearing what the Germans are fixing for lunch (lots of potatoes and cabbage). Hogan and company decide that they can get to Bonacelli with sentimentality, music and food. So, they call the Allied submarine they report to, which connects them to London which connects them to Garlotti’s Pizzaria in Newark, New Jersey. It is run by the father of one of the men at Stalag 13. From him they get a recipe for pizza for LeBeau to make to tempt Bonacelli and finish by asking him to sing ‘Santa Luccia’. 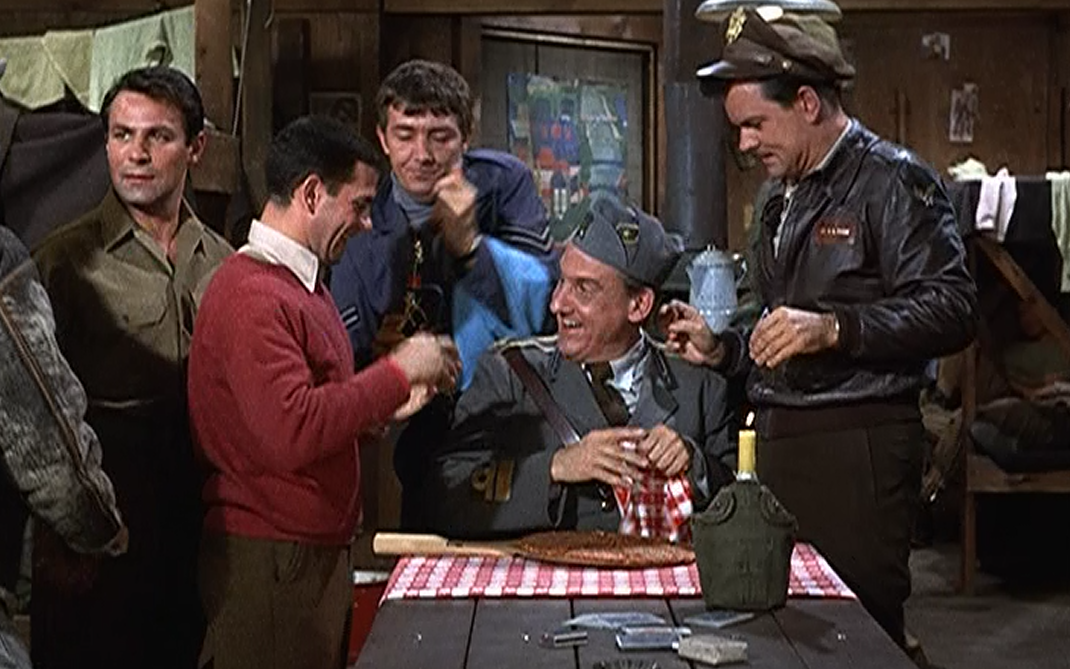 Later that night, with wine, pizza and song, the Allies tempt Major Bonacelli over to their barracks and get him to tell them how many Germans are stationed in Capizzio. While he is eating, he mentions possibly going to the United States as he has no desire to go back to his post and fight for the Germans. Hogan then gets the idea to turn him and asks the Major to become an agent in Capizzio for the Allies. At first, he is reluctant, having no desire to be shot as a traitor if he is discovered but the Allies play on his sentimentality again, persuading him that he would be benefiting his country by shortening the war. Finally, Bonacelli agrees on the condition that he gets the recipe for the pizza he’s eating. However, the next morning, as he is saying his goodbyes to Colonel Klink, a truck arrives with the driver he had pulled his gun on during his trip to camp. He accuses Bonacelli of trying to desert and Colonel Klink orders him placed under arrest. To rescue their new secret agent, Hogan hatches a plan to make Klink think Bonacelli is firmly on the Axis side and a hero as well. 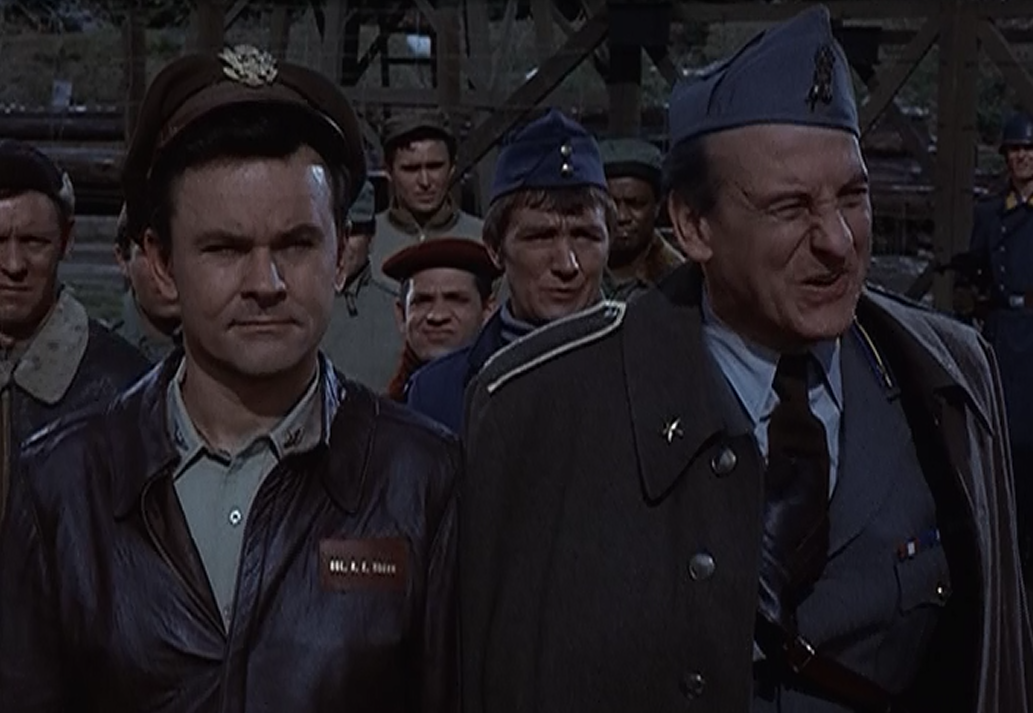 Just as Klink is reporting the incident to Berlin, Schultz rushes in to inform him that ten prisoners have escaped and that Major Bonacelli is missing. Klink flies into a panic at the thought of his perfect record being destroyed. The escapees, meanwhile, meet up in the woods and tell Bonacelli that he has to march them back to camp, thus becoming a hero in Germany and the savior of Colonel Klink’s reputation. Back at the camp, Klink is fuming that none of his search parties have been able to find the escapees anywhere, even putting one of the search dogs on report for not living up to the standards of a *German* Shepherd. Just then, all ten prisoners return, led by Bonacelli, marching in perfect order back into camp, whistling the theme song of the show in a little homage to 1957’s “Bridge on the River Kwai”. Major Bonacelli is welcomed as a returning hero and in the last scene of the episode, Klink calls in Hogan to read him a letter from the Italian major. Earlier, when Hogan was asking Bonacelli how many Germans there were in Capizzio, he did it by asking how many pizzas they ate, figuring two per soldier. In his letter, Bonacelli uses this as a sort of code, saying that he has put his prisoners to work making pizzas for the Germans and by relating how many they are making, Hogan knows the exact number of German troops to report to Allied HQ. Hogan gives a parting remark, saying sarcastically to Klink how “some people think the Italians aren’t with you all the way”. 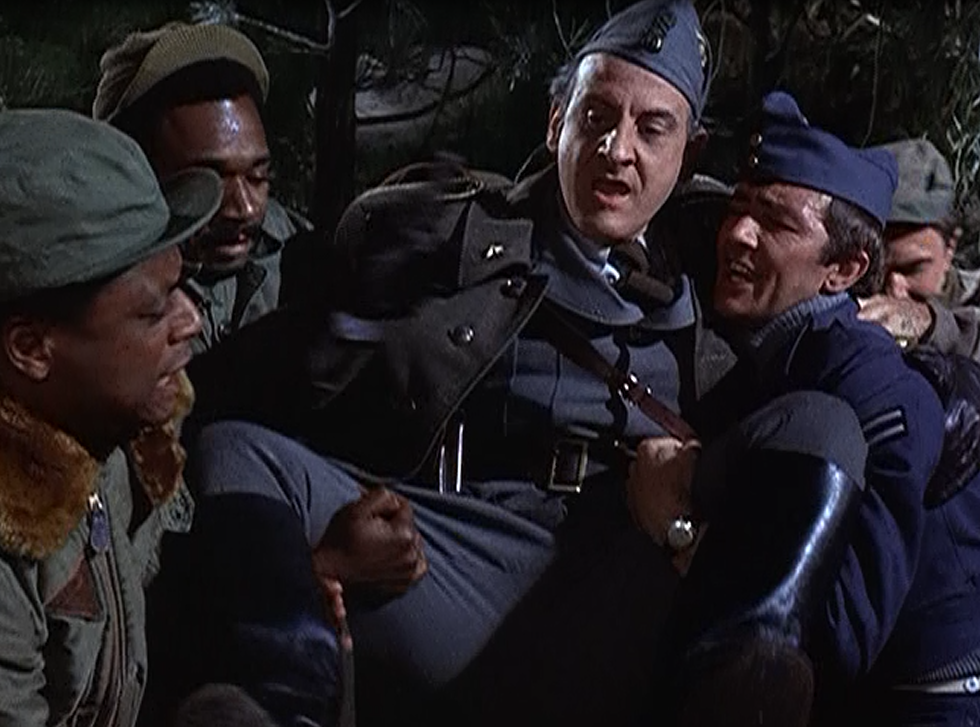 “The Pizza Parlor” is a fairly typical “Hogan’s Heroes” episode and those who like the show will surely find it enjoyable. It is noteworthy for being one of only two episodes to feature a non-German Axis power. For Italians, the stereotyping may be hard to take but if you have a good sense of humor it shouldn’t be a problem. There are a few cracks about the Major being cowardly but his attempt to escape to Switzerland is shown to be more about his disgust with the Germans than a fear of danger. He mentions on his first day in camp that “you can push a people only so far” and seems about to say that soon the Italians would take no more abuse from the Germans but, viewing his surroundings, stops himself. He also keeps his word to the Allied prisoners and ultimately takes on the very dangerous assignment to become a secret agent. The premise is rather absurd but this is even commented on in the episode with Newkirk doubting that a pizza and a few bars of “Santa Lucia” is not enough to make a man switch sides in a war, this, of course, also being a subtle illustration that it was more than that which motivated Major Bonacelli to do what he did. For those who like the character, he returned later in the series in 1969 with the episode, “The Return of Major Bonacelli” (though played by a different actor) in which the Germans discovered that he was passing information to the Allies and Hogan and his men have to help their Italian friend escape to England.
Posted by MadMonarchist at 1:54 PM

Email ThisBlogThis!Share to TwitterShare to FacebookShare to Pinterest
Labels: movies