The Italian Invasion of Russia 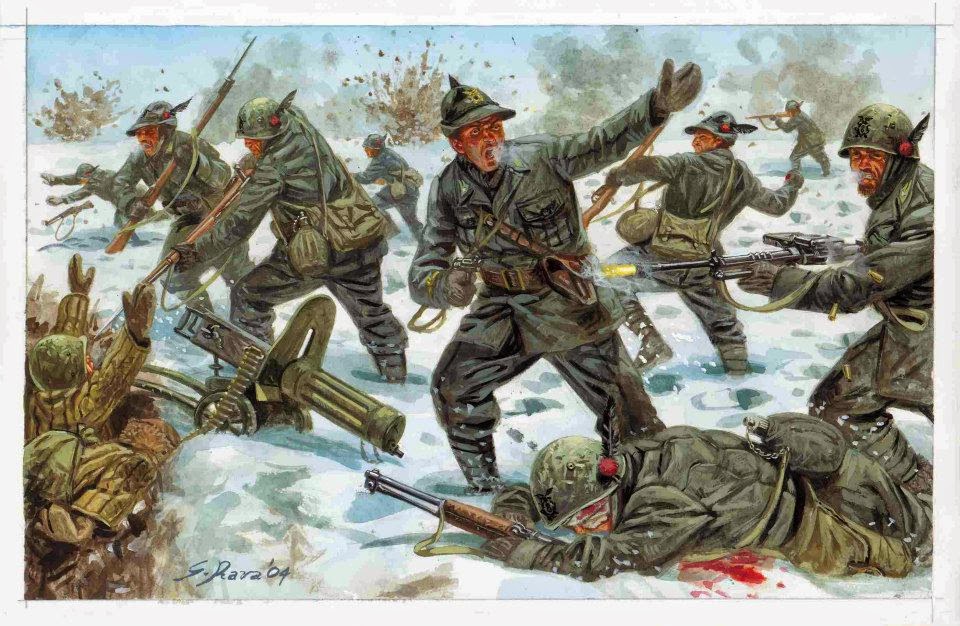 When Germany launched the invasion of the Soviet Union, codenamed “Operation Barbarossa” it was a joint effort of every Axis country in Europe as well as including many volunteers from occupied and even neutral countries. There were Germans, Italians, Hungarians, Romanians, Bulgarians, Dutch, Belgians, Danes, Norwegians, Finns, even French and Spanish troops as well as others. When the invasion began, Mussolini was determined that the Kingdom of Italy would participate and, perhaps, the Duce focused more on it that he should have given the already thinly-stretched state of the Italian armed forces. Nonetheless, Mussolini considered the operation to be of great importance. He saw it as a test between the competing ideologies of Fascism and Communism as well as being important to maintain Italy as one of the top three Axis powers. Germany had come to assist Italy in North Africa and Mussolini saw it as essential that Italy come to assist Germany in Russia. The Duce also viewed the contest as one of east vs. west as he said at the military parade of the initial Italian commitment of 50,000 infantry and 10,000 cavalry. He called attention to how many diverse European peoples were coming together to defend western civilization from the Bolsheviks. He closed by saying, of the Communists, “We know this enemy of mankind. Twenty years ago, we scoured him from our peninsula. Now we will purge him from the planet! Long live our continental civilization! Long live Italy!”

The Italian commitment began with about 62,000 men, as well equipped as possible, organized into the Corpo di Spedizione Italiano or CSI in Russia. This included the divisions Torino, Pasubio, a Celere (fast) division as well as a unit of Blackshirts, the Fascist militia. They were led by one of the most talented Italian commanders of the time, perhaps the best to emerge from the war, General Giovanne Messe (a staunch monarchist). They were posted to the southern end of the front in the Ukraine, part of a line of Axis armies that ran all the way north to the Baltic where German and Finnish troops were soon besieging Leningrad. The Italian corps made good progress from the outset, taking several towns as they advanced and impressing their German allies. Despite being rather outdated, the Italian artillery gained specific praise from the Germans for their zeal and accuracy. However, though they were probably better supplied than Italian units elsewhere, it was still not sufficient and General Messe complained particularly of a lack of anti-tank weapons and ammunition. So badly needed were such items that some Italian troops were issued with 20mm anti-tank rifles that most others had discarded. They had armored units of their own, part of the “fast” division, but these included a great many tankettes which were not designed to take on other armored vehicles and were supported by about 10,000 cavalry. Units of the Regia Aeronautica were also dispatched to the Russian front and gave good service as well as naval units, particularly mini-subs which operated in the Black Sea.

However, while the Italian forces lagged behind their German allies in weapons and equipment, one area in which they were much to be preferred was in their interaction with the local Ukrainian and Russian populace. The Italians had no racial prejudice against the Slavs and enjoyed good relations with the locals, liberating them from oppressive Stalinist rule and re-opening the churches that the Communists had closed as part of their efforts to stamp out religion wherever they found it. The Italians viewed the Ukrainian and Russian civilians, not as enemies, but as the first victims of Communist tyranny. When Mussolini visited the front, he saw this for himself and called the war against the Soviets a “holy crusade” -and one cannot help but wonder if there was any hint of irony in his voice for a man who had been a lifelong atheist. 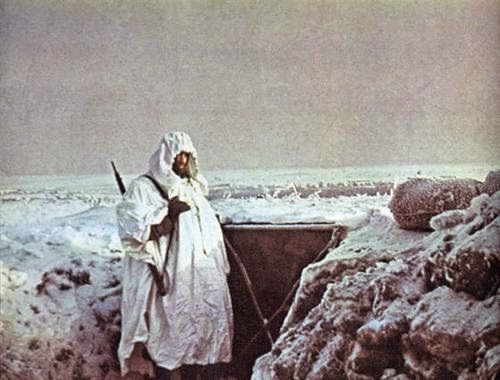 The offensive rolled on and in September of 1941 the CSIR encircled 8,000 Soviet troops in front of the Dnieper River, the Germans being on the east side. The Italians pressed the retreating Soviets east and soon Italian cavalry were riding into Stalino. By the end of the year the Blackshirts were celebrating Christmas in Krestovka. A Soviet land-air attack drove them out but soon the Blackshirts counterattacked and reclaimed the area and continued on the offensive. Alongside the Italians were a number of foreign units serving with them such as the anti-Communist Russian Cossacks who joined the Italian cavalry, the Croat volunteers and the Blackshirt Albanian Legion. In the air, the 22nd Gruppo Caccia and the 61st Gruppo Osservazione Aerea proved invaluable from the outset, shooting down six Russian bombers and two fighters within days of being deployed with no losses for the Italian airmen. Eventually, the 22nd gained 72 victories over the Soviets while losing only 15 planes and of those more were due to accidents rather than enemy action. An example of Italian excellence in the air was Giuseppe “Bepi” Biron who gained “ace” status, shooting down 4-6 aircraft (records of individual victories were not kept at that time) before going back to the skies of southern Italy to more success. 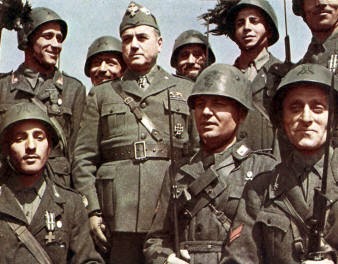 The Soviets launched a massive attack on the Italian forces, hoping to surprise them at Christmas time, but although the fierce fighting raged for a week it was not the victory Stalin had hoped for. The Italians held their ground, threw back the Russian hordes and forced them to retreat. Shortly thereafter, winter conditions brought a halt to operations, though the Italian mechanics did manage to get some planes flight-capable and they were able to do some damage to the Soviets before the arrival of Spring allowed hostilities to resume. Mussolini enlarged the Italian commitment, sending in more divisions and upgrading the CSIR to the Italian Army in Russia even though General Messe advised against it. They were having enough problems supplying the troops on hand and an enlarged command would only mean less for everyone to go around and the commitment of so large a force was simply unsustainable. Nonetheless, Mussolini was determined to show that the Kingdom of Italy was playing a major part in the invasion of Russia when such troops and supplies might have been better spent against the British in Africa.

Italian mini-subs and attack motor boats also appeared in the Black Sea in response to a request for help from German Admiral Erich Raeder. These small craft had a considerable impact, sinking Russian ships loaded with supplies and attacking barges crammed with Red Army soldiers. The Italian and German naval forces were so aggressive that the Soviets were reluctant to risk their own fleet in open combat. They were stung by one attempt to intercept German transports by a Russian heavy cruiser and a destroyer. The warships were attacked by Italian motor boats and one torpedoed the cruiser, putting it out of action for the rest of the war. When the destroyer moved in to pursue, the nimble Italian craft dumped over a trio of depth charges that so damaged the destroyer that it had to break off the pursuit. Enraged, Stalin ordered no more offensive operations without his direct orders. 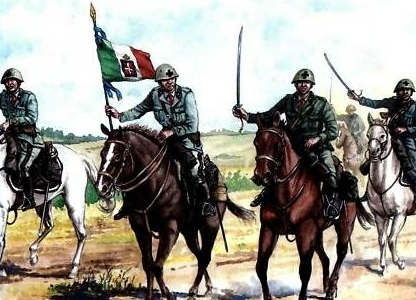 On land, the Italian forces continued to advance, driving deep into Russian territory. Finally, in August, from Serafirmovitch, they launched a massive counter-attack in the hope of breaking through the Italian lines and turning to take the Germans from the rear. Everything depended on the Italians holding firm and that they did. Often forced to use makeshift weapons, the Italians repelled the Russian attacks and while they lost 1,700 men in the bloody battle, they emerged victorious and had taken 1,600 Russian prisoners as well as large numbers of weapons and ammunition. The Italian cavalry also had their moment of glory at the Isbuschenski Steppe. 2,000 Russians with mortar and artillery support were attacked by units of the Duke of Aosta cavalry division. While Italian and some German support units attacked from the front, Italian cavalry with sabers drawn charged from behind, wiping out two Soviet battalions, capturing 50 machine guns, 10 mortars, 4 artillery pieces and 500 prisoners. Italian artillery was also being modified in the field and becoming highly adept at destroying Russian tanks, soon the last Red Army elements in front of Stalingrad had been smashed and forced to retreat.

What happened next is well known to history as the German and Russian forces began the titanic struggle for the city of Stalingrad, plunging into what would be the bloodiest battle in recorded history. The Germans finally took the city though pockets of Russian resistance continued to hold out. Finally, the Russians planned a massive counter-attack to encircle Stalingrad and targeted the armies of the weaker Axis powers (such as Hungary and Romania) as their point of breakthrough. The Italian army also came under attack during this Don offensive on December 16, 1942. Two days later the main Italian airfield was captured at Kanamirovka and 11,000 Italian troops were surrounded at Scertkovo. As German Field Marshal Erich von Manstein moved to relieve Stalingrad the Red Army attacked to block his effort, their force falling heavily on the Italian army along the Chir River. Many units were overwhelmed in the tidal wave of Russian attacks. One such unit was the Voloire which was wiped out, two officers committing suicide rather than surrendering. Many Italian artillerymen also refused to surrender and fought at their guns to the last man. 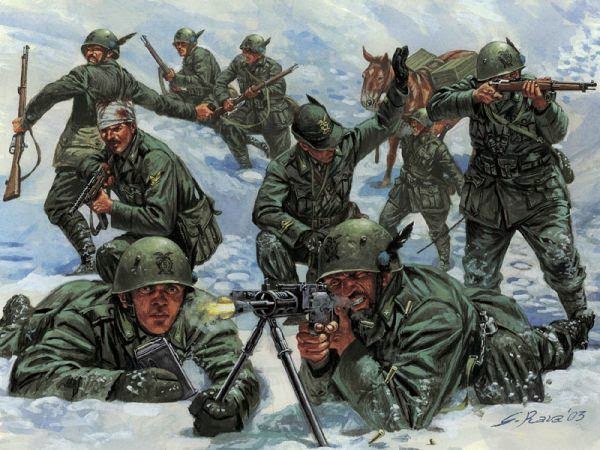 While the remaining Italian planes helped escort German transports carrying the wounded out of Stalingrad, pockets of Italian survivors on the ground were surrounded. The Aplini Corps went on the attack to rescue their countrymen but the odds against them were immense. They fought their way in but were surrounded themselves at Nikolayevka. The Germans could provide no help but the brave Alpini fought like heroes and managed to punch their way through the Soviet lines on January 26, 1943. Only a few days later the remaining German troops in Stalingrad surrendered. As a result of this astonishing breakthrough Radio Moscow said, “only the Italian Alpini Corps is to be considered unbeaten on the Russian front”. With their forces all but gone and the situation in the Mediterranean worsening, Mussolini was finally obliged to withdraw the Italian forces from Russia though a few support units did remain behind. Overall, 229,000 Italians had served in Russia and 85,000 would never return. Some 30,000 were wounded and losses in equipment and artillery was almost total.

The Axis offensive against the Soviet Union was ultimately unsuccessful yet the Italian forces had acquitted themselves bravely. They had fought with great talent, tenacity and skill, winning numerous victories against forces far superior to their own. They had also maintained the honor and dignity of the Italian nation, never indulging in cruelty or barbarity against the local population. In the air, the Italian pilots had inflicted far heavier losses than they suffered themselves, on the Black Sea they had proven instrumental in bottling up the Russian fleet and on the ground the Italian troops had fought with unparalleled courage against seemingly impossible odds. Allied propaganda that disparaged the Italian soldier was proven to be entirely false on the steppes of southern Russia and no one learned the lesson better than the Red Army forces that had met the Italians in battle. The Italians who fought on the Russian front had done honor to their King-Emperor, their homeland and the Italian people.
Posted by MadMonarchist at 1:52 PM