Italy and the American Revolution 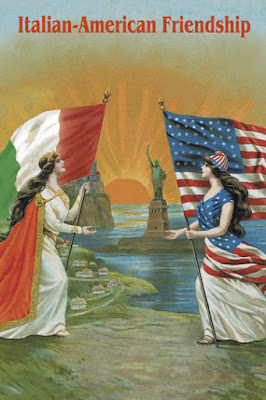 There was, as most know, no united country called Italy at the time of the American Revolution. The Italian peninsula was still divided among a collection of minor states and the dominions of the Pope, most of them under the direct or indirect rule of some major European power, usually Austria. However, Italians played a considerable part in the American war and events in Italy, both historic and contemporary, inspired America's Founding Fathers. The independence movement in Corsica, first against Genoa and later against France, was something many Americans looked to and, of course, the historic legacy of the Roman Republic had a major influence on the establishment of the United States government.

On July 1, 1777 the U.S. government assigned Ralph Izard as Commissioner to the Grand Duke of Tuscany, Ferdinando III, but he was never received and formal diplomatic recognition was never extended to the United States by Florence. That was most likely due to the opposition to the American war by the Austrian Emperor Joseph II who was concerned that his own subjects might follow their example. However, there was still a desire for commercial ties. Ragusa, in what is now Croatia, which had a large Italian presence, established trade links with the United States through Italian agents in France such as Francesco Favi and Giovanni Fabronni. The Grand Duchy of Tuscany never recognized the United States prior to the formation of the Kingdom of Italy. However, there were those who did, though some were quite late such as the Duchy of Parma which recognized the American government in 1850.

In 1796 the King of Naples officially recognized the United States of America, though full diplomatic relations were not established until 1832 due to the tumult caused by the French Revolutionary Wars. The Kingdom of Piedmont-Sardinia established diplomatic relations with the United States in 1802. The Papal States, while waiting a long time to extend official diplomatic recognition to the United States, did open its ports to American trade in 1784 and this was at the instigation of the Papal Nuncio in Paris, not by the Americans. The United States was also allowed to have a consulate in Rome from 1797. The Republic of Genoa recognized the United States in 1791 though that relationship did not last long since the republic was annexed by France in 1805. Oddly enough, one Italian state that was quite unfriendly to the new republic in America was the older Republic of Venice. The Venetian ambassadors in France and Spain were approached by the American envoys but Venice refused to recognize the American government and ignored an effort at correspondence with the Venetian ambassador in Paris. The only reason for this seems to have been a reluctance on the part of Venice to risk endangering their trade with Britain or upsetting the Austrians. As it turns out, the American republic received more support from the monarchies of Europe than from the republics, as surprising as most would probably find that today.
Posted by MadMonarchist at 5:34 PM