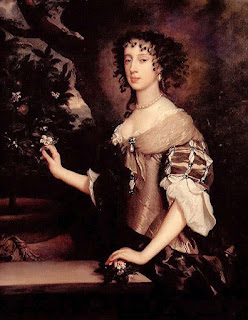 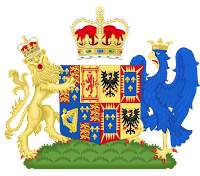 Mary of Modena was the second wife and Queen consort to Britain's King James II. She was born in 1658 in the Duchy of Modena in Italy and descended from the French royal family and the Medici family of Italy. Following the death of his first wife and his conversion to Catholicism James (then Duke of York) began looking for a good Catholic wife, despite the problems this was sure to cause. His older brother King Charles II had ordered his first children raised Protestant but did not object to him marrying a Catholic (Charles II himself believed Catholicism to be correct but political fears kept him from converting until he was on his deathbed). The young Mary of Modena seemed the ideal choice for James. Like his own mother Mary of Modena was a pretty Catholic girl with French connections who believed in religious monarchy. The two married in 1673; James was 40 and Mary of Modena only 15. 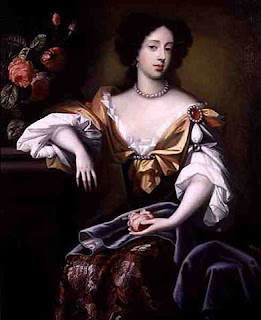 King Charles II, never one to miss a pretty face, quickly warmed to his new sister-in-law and those who knew her descibed her as charming, kind and intense; seemingly the ideal royal wife. However, religious divisions in the country worked against her and she was immediately attacked many Protestants who accused her of being an agent of the Pope (Clement X had suggested the match); secretly plotting some sinister attack on Great Britain. Others, however, looked at the age of James II and did not expect he would have any children by his Catholic wife and that the Protestant succession was secure in his eldest daughter who was wed to the Dutch Prince of Orange. Their fears seemed to be groundless as Mary and James had no luck with pregnancy with several children being stillborn or not living past infancy.

All of this became even more critical in 1685 when James became King and Mary of Modena became Queen consort of Britain. From the outset their were troubles and worries about rebellion as King James II tried to introduce religious freedom for Catholics and dissenting Protestants and uphold the powers of the monarchy. Queen Mary of Modena was not very politically involved but when she did advise her husband she advised him toward that which he was already naturally inclined to; friendship with France, support for Catholicism and staunch defense of royal authority. Sadly, it was Mary's greatest happiness that was to be the downfall of her husband as, in 1688, she gave birth to a healthy baby boy who was, naturally, baptized as a Catholic and even had the Pope named as his godfather. 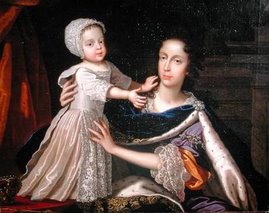 Immediately Protestants claimed that the child was an imposter and called for the overthrow of the King and Queen. Even James' own daughter in Holland announced she believed her half-brother to be illegitimate. The King ordered an investigation simply to silence the critics but it did no good. With the threat of revolution and a Dutch invasion looming James sent Mary of Modena and his young son to safety in France. In due course his army mutinied, he was captured and finally allowed to escape into exile to join them there; thus begining the long years of the Stuart exile. Queen Mary of Modena was a staunch Queen-in-exile and a strong support to her husband. She gave birth to a daughter in exile and when James II died she persuaded King Louis to recognize her son, James III, as the legitimate King of Great Britain and Ireland. She devoted the rest of her life to religious devotion and to supporting the Jacobite efforts to restore the Stuarts to the British throne. She died in 1718 of breast cancer in Paris. Her tomb was later destroyed by republicans in the French Revolution.
Posted by MadMonarchist at 3:19 PM