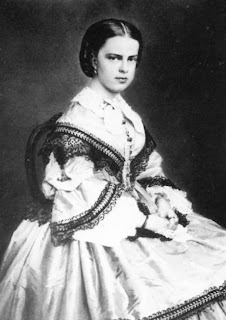 Princess Maria Clotilde of Savoy may not be one of the best known royal figures of history but she certainly deserves to be. I cannot help but think she would be better known and more widely celebrated if not for the fact that those most would expect to did not often hold a considerable grudge against many of her relatives and in-laws. She was born HRH Princess Ludovica Teresa Maria Clotilde on March 2, 1843 in Turin to HM King Victor Emmanuel II of Piedmont-Sardinia (who would go on to become the first King of Italy) and his first wife Queen Adelaide of Austria. She was the first of eight children and, as such, had to take on more responsibility as a girl than her younger siblings. As befitting a princess she had quite an illustrious heritage behind her. Her paternal grandparents were King Carlo Alberto of Piedmont-Sardinia and Queen Maria Theresa of Tuscany and her maternal grandparents were Archduke Rainer of Austria (son of the Holy Roman Emperor Leopold II) and Archduchess Elisabeth of Savoy.

From the time she was quite young Princess Maria Clotilde was known for her modesty, piety and good nature. Her mother was a very devout Catholic woman and impressed upon her the importance of religion, the Church and good moral character, lessons she learned well. However, the Princess did not have much time for childhood. As was the fate of princesses everywhere her marriage was soon the subject of political considerations. At this time, the French Second Empire was the largely dominant power on the continent and King Victor Emmanuel II had it impressed upon him constantly that the goal of a united Italy required the good will of the French Emperor Napoleon III. A Savoy-Bonaparte marriage seemed like just the thing to help bind Paris and Turin together; something which the House of Savoy at least would have thought absolutely unthinkable in the past. Arrangements were soon being made for Princess Maria Clotilde to marry Napoleon Joseph Charles Paul Bonaparte, son of Jerome Bonaparte the one-time King of Westphalia. 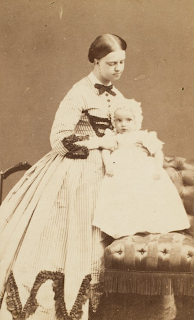 The princess was less than overjoyed at the news she was to marry Bonaparte. In fact, she was absolutely horrified by the prospect and with good reason. She was an intensely religious, innocent, petite girl of barely fifteen. Her husband-to-be was a very large, very anti-clerical and worldly man of more than thirty-seven. She was so young in fact that the wedding had to be postponed for a time and the Piedmontese were less than impressed with how anxious the lumbering Bonaparte was to come and scoop up their dear little princess. The two were married in Turin on January 30, 1859 in what some onlookers described as the union of a gazelle and an elephant.

No two people could possibly have been less suited to each other. He was an anti-clerical liberal who liked lavish parties and fast living; a big man with big appetites. She was a deeply religious conservative who preferred peace and quiet, a small woman with a big heart, bound by royal duty to serve God and the people. He liked to party, she liked to pray, his instincts were ambitious, her instincts were charitable. Princess Maria Clotilde was, needless to say, a very unhappy wife. Yet, she had finally agreed to the marriage because of her devotion to royal duty and in so far as the politics of the match were concerned the marriage worked out well. Plon-Plon (as her husband was known) was a tireless advocate for French intervention in Italy on the side of Piedmont-Sardinia and the Italian nationalist movement. The policies of Emperor Napoleon III regarding Italy were not entirely consistent (his wife constantly urging him in the opposite direction) but French support against Austria was crucial in the eventual triumph of the House of Savoy and the unification of Italy.

Princess Maria Clotilde therefore had the satisfaction of knowing she had done her duty as her father wished but it is doubtful how much that meant to her when her daily life was filled with such unhappiness. She gave Plon-Plon three children; Prince Napoleon Victor in 1862 (who later married Princess Clementine of Belgium), Prince Louis in 1864 and Princess Maria Letizia in 1866 who later married the one-time Savoy King of Spain Amedeo I. She was devoted to her children and was a very good mother but her husband caused her no end of grief with his numerous affairs which was difficult for a proud Savoy princess to take. However, she was nothing if not a woman of duty and proved she could and would endure almost anything that her royal duties demanded of her. It was small comfort that most of the French disliked her husband as much as she did and one thing the French and Italians both agreed on was that he was not worthy of such a good, dutiful wife. However, she carried on, devoting herself to prayer and charity which also earned her a great deal of respect and affection among the people of her adopted country. 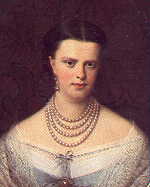 Eventually though, the star of Emperor Napoleon III began to decline and with the disastrous war with the German states in 1870 the French Second Empire came crumbling down and Paris soon broke out in yet another chaotic revolution, in some ways more horrific than those of the past. The Bonaparte clan began to flee Paris and France but Princess Maria Clotilde was reluctant, even in the face of frenzied revolutionaries and the Prussian army. She was adamant that as an Italian princess of the House of Savoy she did not run away but preferred to stay proudly at her post even as the ship of state was sinking beneath the waves. However, for the sake of her family she was finally persuaded to leave Paris and the family moved to Switzerland. When King Victor Emmanuel II died in 1878 it was, in many ways, the final straw for the long suffering princess. With her older sons staying with their father, she took her young daughter with her to Turin for the funeral and remained in Italy afterwards. Shutting herself off from the outside world for the most part in Moncalieri Castle outside Turin, she spent her remaining years in seclusion, prayer and keeping up her charitable work. She died there on June 25, 1911 at the age of sixty-eight.

No one who ever knew her could not sympathize with her for all she had to endure in her life nor could they not but admire her for the stoic pride with which she did endure it. The Princess was a responsible woman, a woman of deep faith, great compassion and devotion to duty. She strove at all times to carry out her responsibilities to God, her country, her family and her people. She had a very magnificent sense of what it really means to be royal. For her, to be royal was to be the servant of her people and she showed that by enduring an unhappy marriage and in her many, many years spent helping the less fortunate. She was an example and an inspiration and, as such, it is entirely fitting that she has since been declared a Servant of God and her cause for beatification is currently underway.
Posted by MadMonarchist at 9:22 PM