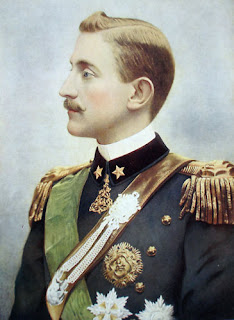 One of the all too often unsung heroes of the Kingdom of Italy in the First World War was HRH Prince Emanuele Filiberto, Duke of Aosta. He was born in Genoa on January 13, 1869 to the soon-to-be King Amadeus I of Spain and Princess Maria Vittoria. From 1870 to 1873 he had the honor of being Prince of the Asturias, however his father soon declared Spain “ungovernable” and returned to Italy. In 1890 Prince Emanuele Filiberto succeeded his father as Duke of Aosta, the second Savoy to hold the title, and in 1895 married Princess Helene of Orleans who had earlier hoped to marry the future King Vittorio Emanuele III. In fact, her parents were rather displeased that their daughter was marrying someone as comparatively low in the royal ranks as the Duke of Aosta but they comforted themselves with the possibility that some terrible disaster might befall the senior line. The Duke and Duchess of Aosta had a successful enough marriage, ensuring the continuity of the Aosta line with the birth of a son in 1898 and another in 1900, both of whom would succeed to the title one day.

In 1905 joined the Royal Italian Army in Naples and made his reputation after Italy entered World War I in 1915. Given command of the Italian Third Army by his cousin the King. The Italian front in World War I was considered one of the harshest in the world, even by veterans of the infamous western front, due to the rugged, frozen, mountainous terrain. Almost as soon as Italy entered the war another deadlock ensued. The Italians launched attack after attack on the Austrian lines across the Isonzo River, taking very heavy casualties and gaining very little. The Austrians would then counter-attack and likewise suffer heavy losses with little to show for it. In all, the Italians fought twelve battles on the Isonzo to little avail but the only offensive, the sixth, which produced real results was led by the Duke of Aosta and his Third Army. In August of 1916 the Italians, led by the Duke of Aosta, captured Gorizia and gave Italy a foothold on the opposite side of the river. The five previous fruitless assaults had left the nation greatly demoralized and this victory was key in restoring Italian morale. 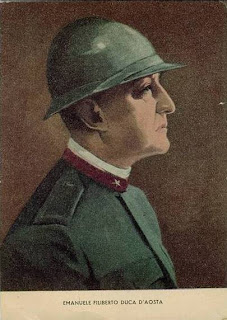 At the time, however, the Duke of Aosta got little credit for the success, at least in some quarters, due to the way General Luigi Capello ingratiated himself to the civilian press. As a result, many credited him with the victory and none seemed to believe it more than he did which helped set the Italian forces up for a great disaster. In October of 1918 the Italians suffered a horrible disaster when the overconfidence of Capello and a lack of foresight by Chief of Staff Luigi Cadorna led to an utter shattering of the line at Caporetto by a German-reinforced offensive. However, the Duke of Aosta was there to pick up the pieces and his Third Army set a good example by their orderly withdrawal behind the Tagliamento. The Duke also played an important role in the recovery of the Italian army which rebounded and was able to come back to win a final victory with the collapse of Austria-Hungary. Because of all this, under the Duke of Aosta, the Italian Third Army was nicknamed the “Undefeated Army”.

The Duke of Aosta became an Italian hero by his exploits at the front and in the chaotic period after the war and the collapse of the Orlando government in 1919 some nationalist and veterans organizations favored the Duke of Aosta launching a military coup and taking over the government but, of course, nothing ever came of such talk. In 1926 Benito Mussolini had the Duke promoted to the rank of Marshal of Italy in recognition of his long and meritorious service to his country. Prince Emanuele Filiberto, Duke of Aosta died in Turin on July 4, 1931 and was succeeded by his son Prince Amedeo. As per his wishes he was buried at the military cemetery at Redipuglia alongside the fallen soldiers of his Third Army.
Posted by MadMonarchist at 9:17 PM