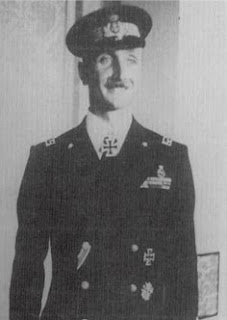 The Italian submarines of the Regia Marina, though overshadowed by the U-Boats of Germany, had an excellent record of service in World War II, taking a heavy toll on Allied ships throughout the Atlantic and Mediterranean. Italy had some great boats and some great commanders and when the two came together, it made the Sommergibili something to be feared by the Allies. One of the top submarine "aces" of the Second World War was Captain Carlo Fecia di Cossato. A Roman, born in 1908, he graduated from the Naval Academy at Livorno in 1928 and was first posted to the Italian outpost in China. Later he began serving on submarines during the Italian intervention in the Spanish Civil War. In World War II his first command was the submarine Ciro Menotti. He went up against the Royal Navy in that boat but his real moment of glory came with his next command, the Calvi class submarine Enrico Tazzoli. This was definitely a winning combination for the Regia Marina as was soon proven when di Cossato took his boat into the rough waters of the Atlantic Ocean to hunt for ships. At 1,332 tons the Enrico Tazzoli was a big submarine built for long cruises to hunt in distant waters. The operational limit of the boat was 21,600 km. With a crew of 66 trained and motivated volunteers, two 4.7in deck guns and four AA guns with eight torpedo tubes, it was a formidable weapon and in the hands of a talented captain like Carlo Fecia di Cossato, it took a terrible toll on the Allied shipping lanes.

During his service in the Atlantic (mostly the south Atlantic) di Cossato sank 18 Allied merchant ships for a total of 96,553 tons with a further 5,000 tons of enemy shipping damaged but not sunk outright. For his exemplary service the captain was awarded two Silver Medals for Military Valor and one Gold Medal for Military Valor from the King of Italy and the Iron Cross first and second class and the Knight's Iron Cross from the Germans. The Enrico Tazzoli hunted a great deal in southern waters, in the shipping lanes near Brazil and sank ships that were Greek, British, Yugoslav, Norwegian, Dutch, Uruguayan and one American freighter which was its last victory. Captain Carlo Fecia di Cossato was promoted to command a squadron of torpedo boats and the Enrico Tazzoli was converted to be a submarine freighter rather than an attack submarine. It was sailing on a transport run to the Empire of Japan when it was sunk in the Bay of Biscay in 1943. 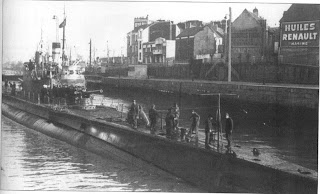 Unfortunately, her famous captain came to an unhappy end as well. The 1943 armistice troubled him deeply, as it did many men in uniform who had been fighting the Allies so hard only to suddenly find themselves on the opposite side. Captain di Cossato gave valiant service fighting against his former German allies off Bastia in 1943. However, the way the Kingdom of Italy was being treated by Britain and France as well as continued emotional trauma and confusion over the armistice and declaration of war on Germany left him unable to continue. The final terms of the armistice, which called for the total surrender of the Regia Marina was the last straw for the proud captain. He wrote, we "have committed an ignominious act without any result" and in 1944 he took his own life in Naples. It was a tragic end to a brilliant naval career for one of the most successful submarine commanders in history.
Posted by MadMonarchist at 12:57 PM