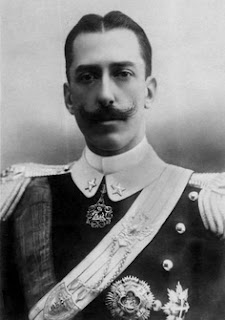 Prince Vittorio Emanuele, Count of Turin was born in Turin on November 24, 1870 to Prince Amadeo of Savoy, Duke of Aosta and Maria Victoria al Pozzo della Cisterna. King Vittorio Emanuele II of Italy was his grandfather. Shortly before his birth the Duke of Aosta had been elected King Amadeo I of Spain and shortly after his arrival the family departed for Madrid where the little prince was given the title of Infante of Spain. That, as we know, did not last long and the vision of his grandfather the King of Italy to place royals of the House of Savoy on as many Mediterranean thrones as possible came to nothing when the (rather reluctant) King Amadeo I declared Spain to be ungovernable and abdicated, after which the First Spanish Republic was established (Boo! Hiss!). Being only a baby at the time, it is doubtful these major world events made much of an impression on the little former Infante of Spain. Back home in Italy with his family, he had a relatively normal childhood for a prince of the House of Savoy. As was usual, he was given an education that took for granted a military career and which emphasized dynastic duty and the long history and past glories of the House of Savoy. 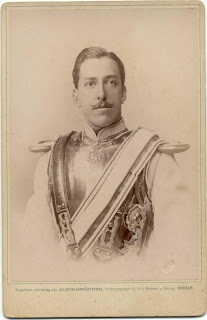 The Count of Savoy took all of that very much to heart and grew into a dashing young man who determined to become a cavalry officer. Toward that end, he studied at the Military Academy of Modena, graduating in 1889 with the rank of second lieutenant. He was first assigned to the Nice Cavalry regiment of the Royal Italian Army and then served as a lieutenant in the “Piemonte Reale Cavalleria”. The Italians, as most know, have a reputation for being a proud and somewhat emotional people and the Count of Turin certainly seems to have inherited those traits, combined with his education about his family history and the role of the Savoy as the guardians of Italian honor. All of this set the stage for the incident in his life he was to become most famous for. It all came about in France where Prince Henri of Orleans, son of the Duke of Chartres had written a number of articles in “Le Figaro” concerning the recent Italo-Abyssinian War and the devastating Italian loss at the battle of Adowa. A little background is in order.

During this battle, unfamiliarity with the terrain and misinformation provided by guides in the pay of the enemy, led a small Italian colonial column of 18,000 troops (mostly African natives with Italian officers) to become separated and then attacked piecemeal and overwhelmed by a massive Ethiopian army of well over 100,000. In the aftermath, many of the survivors on the Italian side were massacred and/or tortured and mutilated. Those who were taken prisoner were not released at the close of hostilities but held for ransom (which was paid secretly by King Umberto I of Italy to the Ethiopian Emperor). It horrified public opinion in Italy and brought down the government of the long-time political powerhouse Francesco Crispi (a proud and ambitious veteran of “The Thousand”). Now, enter Prince Henri of Orleans. Throughout his life Prince Henri had proven himself to be a bold and intrepid traveler as well as a condescending man. He was most known for being an inveterate Anglophobe, writing and uttering many a diatribe insulting and condemning Great Britain in the harshest terms. Yet, oddly enough, the British seemed to celebrate him in spite of that. He would learn that Italians responded quite differently to being insulted. 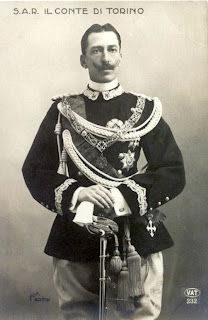 In his articles about the Italo-Abyssinian War and its aftermath, particularly regarding the Italians who had been taken prisoner, Prince Henri essentially dismissed them all as being so many cowards. In doing so he also, probably inadvertently, insulted the Ethiopians as well by taking the attitude that only inept cowards could have possibly lost a battle to Africans, no matter how vastly outnumbered they were. The Count of Turin happened to read these rather explosive articles and was thoroughly outraged. The honor of Italian soldiers had been thoroughly insulted by this French prince and if no one else was prepared to do anything about it; he would. The British might have tolerated this sort of thing, but the Count of Turin would not and accepted the role of champion on the part of Italian soldiers everywhere. He demanded satisfaction and demanded Prince Henri retract his insults and apologize. The proud Frenchman of course refused and the Count of Turin immediately challenged him to a good, old fashioned duel.

The time and place were decided; August 15, 1897 in Vaucresson at Versailles. The weapon chosen was the sword since, even though the French preferred to duel with pistols, the Italians felt this unworthy of princes deciding a matter of honor. In Italy, pistols were used by cuckolded husbands while nobles and the high born settled differences with the saber. So, at five o’clock in the morning, it began with the duel being supervised by Count Leontieff and Count Avogadro in the Bois de Marchechaux. The two had at each other and after five reprises the Count of Turin was victorious, inflicting a wound on Prince Henri’s abdomen that the doctors of both parties deemed serious enough to put the Prince at a disadvantage and so the match was awarded to the Count of Turin. All of Europe was rather enthralled by this showdown that seemed like a throwback to centuries past. In Italy, however, the Count of Turin became a national hero instantly and was celebrated across the country for his victory and for standing up for Italian honor. When he returned to his homeland he was met in Turin by King Umberto I who said, “I want to be the first to congratulate you with all my heart on the example you set and the success you scored.” 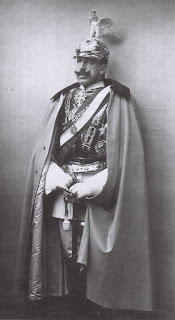 Prince Vittorio Emanuele would be a celebrity for the rest of his life thanks to that famous duel but, of course, it was not the sort of thing he made a habit of. The famous Italian poet and scholar Giovanni Pascoli even penned a little poem about the contest. The following year the Count of Turin went on a world tour, visiting New York in the United States, presenting the silver cup to the winner of the Count of Turin golf tournament at the Newport Country Club and went on to visit the Empire of Japan and the Qing Empire of China. He also continued in his military career, eventually rising to the position of commander-in-chief of all Italian cavalry. He commanded the Italian cavalry in World War I, which was rather the ‘last hurrah’ for that particular branch of service and, ironically enough, when it was over was awarded the Croix de guerre by the French Republic. Later, he retired from active duty and left Italy after the monarchy was abolished following World War II. He died in Brussels, four months after the proclamation of the Italian Republic, on November 24, 1946 at the age of 76. He had accomplished a lot in his life but he will always be most remembered as the Savoy royal who fought a duel in 1897 for the honor of the Italian army.
Posted by MadMonarchist at 9:05 PM