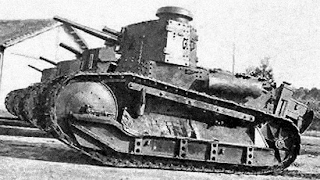 Possibly the longest serving tank in the armory of the Kingdom of Italy was the small, rugged Fiat 3000 light tank. It was the first tank model to be made in Italy and was the standard armored fighting vehicle for Italian forces after World War I up until almost the start of World War II. Based on the popular French Renault FT of the First World War, it was always more of a World War I tank than a World War II tank being, essentially, an armored machine gun unit. It began service in the Royal Italian Army in 1921 and served throughout the remaining years of the Kingdom of Italy. The original Fiat 3000 M21 was armed with two 6.5mm machine guns but the later Fiat 3000b of 1930 (or M30) was given a 37mm gun, along with a more powerful engine. It had a top speed of 21 kmh (13mph) and was protected by 6-16mm of armor plating and carried a crew of two; one driver and one gunner. When it was designed and built, it must be kept in mind, there was no intention of such a machine ever engaging another tank but, as had been the case with tanks in World War I, was designed to be an anti-infantry vehicle. 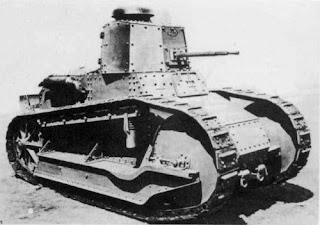 The Fiat 3000 saw extensive service in a variety of terrain. During the war for the pacification of Libya, these tanks were brought in to give Italian forces a clear advantage and they performed quite well. This was actually the first time anyone had used tanks in the deserts of north Africa, though it certainly would not be the last. The Fiat 3000 was also used in the conquest of Ethiopia and they were not the first in the country. Back before Ethiopia took a hostile attitude to the Kingdom of Italy, the Duke of Abruzzi had given a Fiat 3000 to the Ethiopian Empress as a gift. In 1928 supporters of the Empress tried to restore her to power and Emperor Haile Selassie, who had seized control of the country from the Empress, used the Italian tank she had been given against her forces. None were used by the Italian forces in the Spanish Civil War but there may have been one that found its way into the army of the Spanish republican forces Italy and the Spanish nationalists were fighting against. By the time World War II broke out, the Fiat 3000 was very much outdated and no longer fit for front-line service.

In spite of this fact, the material shortages Italy suffered throughout the war meant that some Fiat 3000’s had to be pressed into service again when Italy entered the war. A small number saw service in the rugged terrain of southern Albania and northern Greece, however they would have proven less than useless up against even the earliest models of British tanks that Italy was facing in north Africa at the time. They last saw service in 1943 during the Allied invasion of Sicily when Italy was so hard-pressed that many antiquated weapons, or any weapons of any sort, were thrown into the line in the desperate fight to stop the invaders. In some ways, the defense of Sicily must have seemed reminiscent of the First World War with the Allies coming ashore to be greeted by Italian troops wearing outdated uniforms including Adrian-style steel helmets such as were worn in World War I and equipped with World War I vintage artillery in some cases as well as a few Fiat 3000 light tanks. It was a hopeless fight and by that time they were hopelessly outdated and outclassed, as everyone knew, but still, some respect should be given to the little Fiat 3000 tanks for putting in so many years of service to Italy.
Posted by MadMonarchist at 1:30 AM