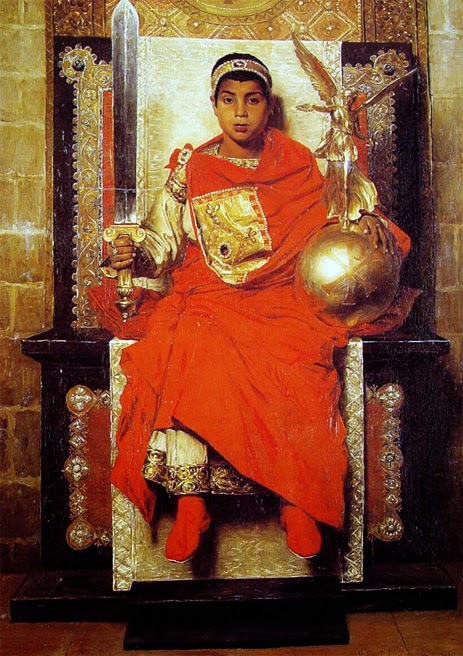 It was on this day in 393 AD that Emperor Theodosius the Great proclaimed his son Honorius "co-emperor" of the Roman Empire. Honorius was only eight-years old at the time but he would go on to have one of the most disastrous reigns in Roman imperial history, a far cry from that of his father. Emperor Theodosius had reunited the Roman world, being the last caesar to rule both east and west, defended the frontiers, established Christianity as the official religion of the Roman Empire and generally had quite a glorious reign. Emperor Honorius, on the other hand, would preside over the first sacking of Rome by the barbarian hordes when Alaric the Visigoth captured the Eternal City in 410 AD. How could this have happened?

There were many contributing factors of course but one that stands out was the lack of an effective commander to lead the Roman legions against the enemy. Yet, such a man had existed previously in the reign of Emperor Honorius and that was the vociferous warrior Stilicho. A 'Romanized' barbarian himself (he was half-Vandal), Stilicho had defended Italy from the barbarians with remarkable ability, rushing from one danger point after another to defend the Italian heartland of the Roman Empire from attack after attack. He was one of the most remarkable generals of Roman history. He was also the Emperor's former guardian and his father-in-law. However, a particular dishonest official managed to convince Honorius that Stilicho was plotting against him and so Honorius had Stilicho executed. Thus the Roman Empire lost its most talented general at a time when such a man was sorely needed.

What lesson can be learned from this? The lesson is compounded by the fact that this was not an isolated incident. Later, Emperor Valentinian III had another talented Roman general, Flavius Aetius, executed. It was Flavius Aetius who defeated Attila the Hun at the Battle of Chalons-sur-Marne. The point is that, in its declining years, the Roman Empire had ceased to value men of talent and proven success. On the contrary, such men were plotted against by lesser men who feared them because of their talent. They saw them as rivals rather than as valuable assets to defend the Roman world. We can see, with the sack of Rome, where such selfish attitudes ended. Today, it seems many have the same mindset, glorifying the mediocre and treating the talented and successful with contempt rather than appreciation. This is something that should be stopped, otherwise we shall all end up like Emperor Honorius, bereft of talent and with an empire crumbling around him.
Posted by MadMonarchist at 7:40 PM