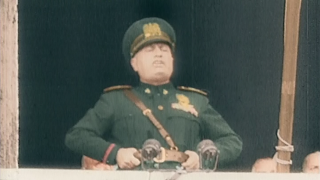 It was on this day in 1940 that the Kingdom of Italy, or to be more precise, Benito Mussolini, declared war on Great Britain and France, officially bringing Italy into World War II. Generations since have remarked on what a grave mistake that decision proved to be. The result was defeat, division, the fall of the monarchy and the permanent reduction to second or third rate power status for Italy (at least before the EU in which no one country counts for much at all). It ended up costing Mussolini his life and many historians have speculated that, were it not for the declaration of war of June 10, 1940 the Duce and his Fascist Party might have remained in power for many more years, perhaps even decades to come. He might have at least lasted as long as Generalissimo Franco in Spain. However, the chance for Italian expansion across the Mediterranean and North Africa was too great a temptation for Mussolini who decided on war in spite of the misgivings of his monarch, King Vittorio Emanuele III, who never trusted Nazi Germany but who was also becoming increasingly ignored by the dictator who was, technically, his first minister. Yet, it would be wrong to think that there had been nothing on the part of the Allied nations to provoke a declaration of war from Italy. 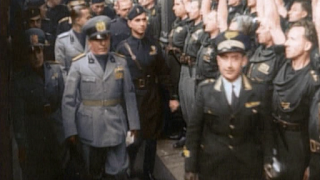 One could go back to the first, ham-fisted effort by the Nazis to take over Austria with the assassination of Chancellor Engelbert Dollfuss. On that occasion Italian troops had been rushed to the border as a warning directly from Rome to Berlin not to occupy Austria. The British and French had applauded the Italian action but at the same time did nothing to support the effort, leaving Italy to face Germany alone. Thankfully nothing came of it but it was something Mussolini would never forget. He was also further angered by the sanctions placed on Italy by the League of Nations over the war with Ethiopia, particularly irksome considering that France and Britain, who took such a self-righteous tone, already ruled almost the whole of Africa between them. This was what pushed Mussolini into the pact with Hitler, a man he had previously despised. Later, when the Allies belatedly recognized the danger that Hitler posed, they clumsily sought Italian assistance while the sanctions they imposed on the country and which were still dragging down the Italian economy were still in effect. Obviously, Mussolini was not likely to be receptive to their appeals given that.

When World War II broke out after the German invasion of Poland over the city of Danzig, Italy tried to arrange a cease-power and talks between the major powers but Britain and France ignored the offer. Unprepared for war, Italy at first remained on the sidelines, trying to maintain good relations with both sides. This was what King Vittorio Emanuele III thought best but the Allies became convinced that Mussolini would get into the war sooner or later and so determined to provoke him into entering the conflict before the Italian armed forces could be fully upgraded and prepared. Allied military buildup around Italy increased dramatically and in March the Allies ordered the seizure of all shipments of German coal headed for the industrial heartland of Italy in mid-Channel. This was particularly infuriating to public opinion in Italy and again brought to mind the earlier sanctions imposed on Italy by countries with whom Italy was at peace and toward whom Italy had done no harm. Mussolini denounced the action as piracy and, given that it was the forceful seizure of goods on the high seas by a neutral power with whom neither France or Britain was at war, he did have a point. 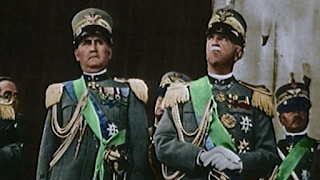 However, by June of 1940 most thought the outcome of the war to be a foregone conclusion and that the defeat of France and Britain was already inevitable. This was a major mistake but even though it seemed to the King that Franco-British resistance was about to collapse, he still wanted to avoid war if possible. Royalist members of the Fascist leadership like Balbo, De Bono and De Vecchi talked about the King revoking the military powers Mussolini had been granted but, in the wake of so many German victories, they backed down from calling the Fascist Grand Council to make a formal decision on the matter. Some also believed that Mussolini had been on the brink of forestalling such a move by abolishing the monarchy while he still thought he could, before the outbreak of the war forced him to put off the idea, at least until the war was over. Many believed, then and now, that Mussolini intended to abolish the monarchy all along once the war was over. Whether that would have happened, we will never know but, as unwise as joining the war was in retrospect, there were certainly reasons for it. Italian shipping had been seized, in violation of her neutrality, the Allies had been less than friendly or fair toward Italy from the end of the First World War to that time and with the British in control of Gibraltar and the Suez Canal, Italy was at the mercy of another country to “bottle up” Italian commerce at any time. 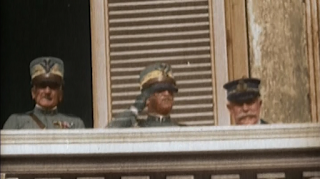 Many have said since that if Mussolini had resigned and retired from politics after the Munich agreement he might still be remembered today as one of the great statesmen of the twentieth century and that the Fascist Party might have continued to hold power in Italy for many years, even decades to come. Would the monarchy have survived though? It never seemed to be secure in the hands of Mussolini and had he resigned from office all would have depended on who succeeded him. Many in the Fascist leadership had become more royalist in the years leading up to World War II as the deficiencies in Mussolini’s policies became more evident. What might have been, we will never know. We do know that what happened, starting on this day in 1940, ultimately proved disastrous for the Italian nation. There were reasons for it of course and, at times, it looked like Italy just might emerge victorious only to have such hopes dashed. In hindsight it was a doomed undertaking and while we can admire the courage and patriotic fervor of those who lifted the flag and marched to the front we also mourn the inevitable outcome and the fate that was to befall the Kingdom of Italy, the House of Savoy and the Italian people.
Posted by MadMonarchist at 8:47 AM