Italian Fascism in the United States

In 1924 Count Ignazio Thaon di Revel traveled from Italy to the United States to reorganize Italian-American supporters of Fascism into the Fascist League of North America or FLNA. The first incarnation of the FLNA had been founded earlier by Dino Bigongiari, Professor of Italian at Columbia University. So it can be seen that the drive toward Fascism was instigated by Italian-Americans in the United States and not by the directive of the Fascist government in Rome, though no doubt Mussolini approved. Count di Revel, however, in late 1924 took central control as President of the Fascist Council for the FLNA which stood for the opposition to radicalism, chiefly instigated by the Bolsheviks and their supporters in America (many of which were deeply imbedded in the labor unions). One member said they stood for opposition to “atheism, internationalism, free-love, communism and class hatred” which is as good a summary as any. The official oath of the Fascist League of North America stated:

I swear to my honor
To serve with fidelity and discipline the Fascist idea of society - based on religion, the Fatherland, and the family, and to respect the authority of the League and of the hierarchy and tradition of our race.
To love, serve, obey and exalt the United States of America and to render obedience and respect to its constitution and its laws.
To keep alive the cult with Italy as the Fatherland and eternal light of civilization and greatness.
To combat with all my might theories and ideas tending to subvert, corrupt, and disgrace religion, the Fatherland, or the family.
To do my best to improve my culture, my physique and my morals, to render me fit for the part I am to play in serving the nation in its hour of greatness.
To submit to the discipline of the hierarchy of the Fascist League of North America. 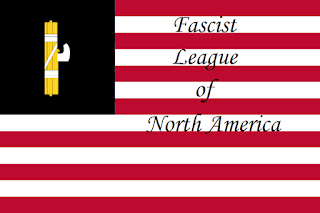 The FLNA attracted a great deal of criticism in the United States and other Italian-American groups, such as the Sons of Italy, condemned the organization. This threatened to damage relations between the U.S. and Italy, particularly when powerful politicians began calling for a Congressional investigation of the group. In 1929, to put a stop to such difficulties, Count Revel announced that the FLNA was disbanding, having, at that time, a membership of 12,500 in 80 branches across the country. Nonetheless, throughout the 1930’s many pro-Fascist Italian language newspapers and radio broadcasts were available to the Italian-American population, some of which had quite large audiences. One of the most prolific was the Italian Library of Information in New York City under the direction of Ugo V. D’Annunzio, son of the famous poet and nationalist. These included information on Fascist economics, the corporatist system, Italian history and the Italian contribution to the exploration, settlement and progress of America.

When the Second Italo-Abyssinian War broke out in 1935, most American sympathy was with Ethiopia, like most of the rest of the liberal-democratic world. However, Italian-American opinion was more divided and particularly as many African-Americans adopted the cause of Ethiopia, many Italian-Americans naturally took the side of Italy. Some volunteered to go and fight for Italy in Abyssinia, joining the 221st ‘Italiani all’Estero Legion of the MVSN Fascist militia (the “Black shirts”) which was made up of Italian expatriates from around the world. In the United States itself, violence sometimes erupted between African and Italian-Americans with shops being vandalized and so on. Yet, not everyone took the side expected. The noted African-American entertainer Josephine Baker (later a friend of Princess Grace of Monaco) was shocked that so many of her countrymen would sympathize with a regime that still enslaved their fellow Africans to the point that she expressed her wish that she could organize a volunteer corps of African-Americans to fight for Italy against Ethiopia.

On the world stage of course, the biggest result of the Ethiopian war was the open defiance of the League of Nations and the eventual alliance of Italy and Germany in the “Pact of Steel”. This change was mirrored in America as well as Italian-American Black shirts made common cause with the German-American Brown shirts in the United States. The Lictor Federation, led by Joseph Santi was one such group (founded by Domenico Trombetta). Dr. Salvatore Caridi was the leader of another, the pro-Fascist Italian War Veterans and in 1937 he and about 500 Black shirt Italian-American war veterans appeared at a gathering in New Jersey of the German-American Bund led by Fritz Kuhn. Caridi was one of the speakers and he encouraged his listeners concerning their political enemies that, “…if they insult Mussolini or Hitler we can punch them in the nose!” On one occasion they also joined forces with the strange American group known as the Silver shirts of William Dudley Pelley for a joint-meeting in support of the Nationalists in Spain, denouncing the Spanish republican government and communism in general.

Exactly how strong these Italian-American Black shirt groups were cannot be known. Their sympathizers tended to inflate their numbers whereas their opponents tended to try to minimize them by downplaying the size of their membership. Studies have shown that about 90% of the Italian-language press in America was generally favorable toward Mussolini and his Fascist regime. And, needless to say, there were always plenty of anti-Fascist Italian-Americans, though as with similar groups elsewhere these tended to be on the far-left and often included communists and anarchists. These would ultimately have a longer life as the international situation developed. When World War II broke out in Europe, pro-Fascist Italian-Americans generally favored, like others, the policy of American neutrality. Most realized that the United States would never take the side of the Axis powers and so were content to push for the best reasonable position in their view which was for America to simply stay out of the fight.

All of that, of course, came to an end with the Japanese attack on Pearl Harbor on December 7, 1941. When, a few days later, Italy declared war on the United States, it became “open season” on all those Italians and Italian-Americans in the country who had voiced support for the Fascist cause. Many Italian-language media outlets were closed down by the government and known Italian-American Fascists were arrested. Those on the west coast were forced to move inland and many had their homes and businesses seized. Although not as well-known as the Japanese-Americans, Italian-Americans and German-Americans were also arrested and put into internment camps for varying periods of time after the U.S. entered the war. However, the vast majority of those who were interned were Italian nationals rather than Italian-Americans who were citizens or who had been living in the United States for many years.

Certainly those who had been prominent supporters of the Fascist regime could count on close scrutiny by the authorities, including such figures as Joseph Ferri in California, the aforementioned Joseph Santi and Salvatore Caridi in New Jersey, John J. Olivo, Paul Lucenti, Joseph Bono, Ralph Ninfo and Floyd Carridi in New York, Luigi Scala in Rhode Island, Father Arthur W. Terminiello of Mobile, Alabama and so on. The vast majority, of course, of Italian-Americans embraced the cause of the United States wholeheartedly and served with distinction in huge numbers during World War II. However, as with the Germans, the Japanese and even the Soviets, Fascist Italy was not without its supporters in America. They are not much remembered today but there was a time when they caused considerable alarm even into the halls of power in Washington DC.

Posted by MadMonarchist at 1:59 AM