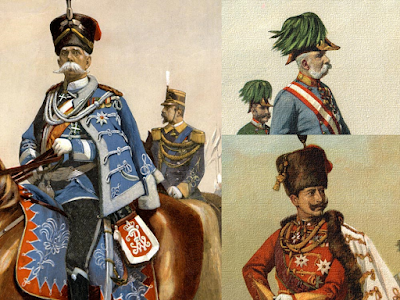 It was today in 1882 that the German Empire, the Kingdom of Italy and Austria-Hungary joined in the "Triple Alliance". Ever since, the Kingdom of Italy has been frequently criticized for failing to follow her allies into the First World War, however, very few understand the details of the agreement made by the representatives of Kaiser Wilhelm I, King Umberto I and Kaiser Franz Joseph I. It was, from the start, intended to be a defensive alliance of monarchs. Germany feared French or Russian actions against them, the Austrians feared Balkan unrest, Russian support for them and did not want to have to worry about a war with Italy at the same time as such a threat. Italy had also recently been outraged by the French annexation of Tunisia. Italians had thought that by refraining from the rush to grab colonies, Italy would gain the moral high ground and the respect of the world. Instead, Italy gained nothing and had Tunisia snatched out from under them by the French Republic. So, it was hoped that the Triple Alliance would deter foreign aggression against Italy and give Italy support, at least from Germany, in the competition for colonial expansion.

Today, all too often, Italy is portrayed in a negative light as never being genuinely committed to the Triple Alliance but this is extremely unfair as it implies that Germany and Austria were. In fact, the Germans never supported Italy in any subsequent colonial venture and the Austrians continued to plan for an attack on their "ally" Italy right up to the outbreak of World War I. In other words, every country continued to look out for their own interests and not those of their allies, which is nothing unique or unusual. In such a situation, it is extremely hypocritical to criticize Italy for doing the same. One should also keep in mind that the details of the agreement was, in fact, violated prior to the First World War and the Kingdom of Italy was NOT the guilty party.

One of the most significant points of the agreement, widely ignored today, was the stipulation that if there was to be any change to the status quo in the Balkans, Austria would consult with Italy before taking action and that if Austria gained any territory in the Balkans, Italy was to be compensated with Austrian territory that was historically and demographically Italian. Austria never honored these promises, never consulting Italy at all about efforts made in the Balkans and refusing to discuss any territorial concessions to Italy after the Austrian annexation of Bosnia-Herzegovina. Add to this the fact that, in 1914, the Chief of Staff of the Austrian army was a man who had advocated launching an unprovoked invasion of Italy, their ally, and the slain heir to the throne, Archduke Franz Ferdinand, had never made much of an effort to hide his strident bigotry toward all Italians. To a lesser degree, German Kaiser Wilhelm II had not impressed many people with his insulting antics towards the King of Italy during a state visit to Rome (he purposely brought his tallest soldiers so as to make the short Italian monarch seem tiny in comparison -a petty and juvenile antic).

It should, therefore, be no great surprise that when war came, Italians were not rushing to arms to fight alongside Germany and Austria. It is also worth repeating that the Triple Alliance was always a defensive alliance and, while there were certainly circumstances involved, when the fighting actually began it was with the Germans and Austrians being the ones on offensive rather than the defensive. The Triple Alliance, it is true, was not a successful pact as it did not prevent war and did not endure beyond the Austro-German ethnic core (the Hungarians were not in favor of war in 1914 either). However, to portray Italy as the false partner, to portray Italy as the one who treacherously betrayed "faithful" allies, is preposterous and totally untrue.
Posted by MadMonarchist at 7:13 PM