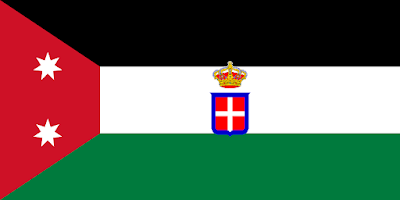 One of the most neglected areas involved in World War II was the Middle East. Everyone knows about the fighting in north Africa, across Europe, southern Russia and the Far East but relatively few are aware of how involved countries in the Middle East were. Italian forces were involved in this area as well and one area included in this was the then Kingdom of Iraq. Just to understand the basic background of the region, the Kingdom of Iraq had been created with the support of the Allies after the breakup of the Turkish Ottoman Empire following World War I. The Kingdom of Iraq was made a mandate of the British Empire but by the time of the outbreak of World War II, all British troops had been withdrawn for several years with only a few RAF bases being maintained there. Iraq was governed by Iraqis and defended by Iraqis though they remained a part of the British Empire. Some were happy with this state of affairs but others were not and one of those who was not was Rashid Ali, an Arab nationalist who became prime minister of Iraq in 1940. He seemed a likely collaborator with the Axis powers.

When World War II broke out, the Iraqi government under Rashid Ali did, rather unenthusiastically, break off diplomatic relations with the Nazi Germany due to the state of war between Britain and Germany. However, when the Kingdom of Italy declared war on Britain and France, the Iraqis did not break off diplomatic relations with Italy and, that being so, the Italian embassy in Bagdad became the center of operations for the Axis sympathizers in the area. At the same time, Italian air power was bringing the war to the Middle East when daring, long-range bombing missions by the Regia Aeronautica, hit British oil facilities in Bahrain and Saudi Arabia in October of 1940, (mentioned previously here) forcing the British to redirect military resources and causing a fuel shortage that allowed Italian forces to reinforce the armies in Libya without serious opposition from the British. Meanwhile, in Iraq, Rashid Ali worked to eliminate British influence in the country and began working with the German minister in Turkey and the pro-Nazi Grand Mufti of Jerusalem to forge closer ties with the Axis powers. The British, naturally, learned of this and responded with sanctions against Iraq.

In 1941 Rashid Ali was forced to resign as prime minister but he soon returned and launched a successful coup on April 1, taking over the country and installing a new regent for the child monarch, King Faisal II. He expelled pro-British officials from the country and asked the Germans for military assistance in the event of war. The British response was rather limited at first, consisting of the transfer of British and imperial forces from India and strengthening the Royal Navy presence in the Persian Gulf. As Iraqi forces moved in around RAF bases in the country, the British responded by launching air strikes, destroying most of the Iraqi air force and enabling them to send support to British forces at Habbaniya which had been besieged by the Iraqis. The Grand Mufti of Jerusalem declared a jihad against the British and the Iraqis cut off the oil supplies of the country from going to the Allies. Air power was critical in these operations and the early destruction of much of the Iraqi air force gave Britain a clear advantage.

When the Iraqis tried to attack Habbaniya from the air with one of their few surviving planes, it was an Italian SM.79 Sparviero. RAF interceptors shot down the plane and subsequent British attacks pushed the Iraqis off of their commanding position on the plateau outside Habbaniya. British ground and air attacks also took a heavy toll on Iraqi reinforcements sent to the area, which had collided with retreating Iraqi forces causing much confusion on the ground. The Germans, with the situation worsening, moved to support the anti-British Iraq regime and obtained support from the Vichy French government, which held power in Syria, to support their efforts to bolster the pro-Axis forces in Iraq. Using Syrian bases, a number of German Luftwaffe personnel and aircraft were sent from May 10-15 to reinforce the Iraqis and develop a joint plan of action against the British. Unfortunately, the Allies were aware of this as messages were still traveling via the Italian diplomatic channel which was being intercepted by London.

On May 27, 1941 (75 years ago today) support for the Iraqis also arrived from the Kingdom of Italy with the transfer to the Iraqi city of Mosul of 12 Fiat CR.42 biplane fighters from the 155a Squadriglia of the Regia Aeronautica to create the ‘Squadriglia speciale Irak’. It was these Italian aircraft which fought the last air engagement of the campaign when, on May 29, the Italian planes intercepted a force of Hawker Hart light bombers escorted by Gloster Gladiators. In the aerial combat that ensued, the Italians shot down two Gladiators for the loss of one CR.42 biplane. Axis forces were soon on their way out again as the Iraqi forces had almost nothing at all to support the Axis air forces and Turkey, a neutral country, refused to allow Axis military units to move through their country to supply and reinforce their units in Iraq. It was not long before the German and Italian forces in Iraq began to pull out. Some German units did see action as the British launched a major offensive to take back control of Iraq but they did minimal damage and had no effect on the outcome. 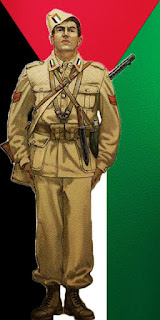 As the British moved advanced on Bagdad with a column of troops from the Indian Imperial Army, on May 29 Rashid Ali and the Grand Mufti of Jerusalem fled to Persia and from there to Germany. The British secured Bagdad and a pro-British government was put back into power. That was the end of the effort to put Iraq into the camp of the Axis powers. However, the Grand Mufti of Jerusalem continued to call on Muslims to unite behind Nazi Germany and he helped organize Muslim volunteers for the Nazi Waffen-SS, though they ultimately proved unsatisfactory. The Italian army also formed a special unit for Arab volunteers who wished to fight alongside them the following year on May 1, 1942. These recruits came from various Arab or Islamic countries and some did come from Iraq. However, the course of the war with its numerous setbacks discouraged enlistment and no more a few hundred Arabs ever joined the ranks. They were never fully organized and equipped before the end came with the 1943 armistice.
Posted by MadMonarchist at 10:10 AM