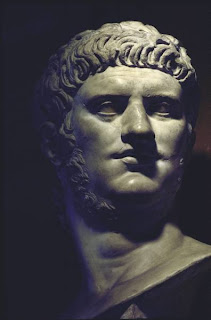 Even those who know next to nothing about Roman Imperial history have at least heard of the Emperor Nero. However, most know him as the monarch who ‘fiddled while Rome burned’ and that he blamed the Christians for setting the fire while actually having done the deed himself. Unfortunately, there is no real evidence that he did commit this crime for which he is most famous. Most sources point to him being less than a ‘good guy’ and yet there can also be little doubt that his reputation has suffered greatly from assumptions being spoken as fact and then embellished over the years in each retelling of his deeds. Countless histories, novels, plays, poems and Hollywood films have nonetheless ensured that the popular image of the Emperor Nero is that of a megalomaniacal, hedonistic, murderous tyrant. The truth, as usual, is likely much more complex.

He was born Lucius Domitius Ahenobarbus on December 15, 37 AD in Antium. His father was a well-to-do Roman from a long influential family and his mother was Agrippina, daughter of Germanicus and sister to the notorious Emperor Caligula. As a young child Nero learned how dangerous imperial connections could be. His father died when he was three and Caligula had his mother exiled to the Pontian islands when he was very small. She was not welcomed back at Rome until the reign of Emperor Claudius who married Agrippina in 49 and adopted her son as his own which is when he became known as Nero Claudius Caesar Drusus Germanicus. In 51 AD Emperor Claudius named him heir to the throne and a couple of years later arranged his marriage to his daughter Octavia. With the death of Claudius, Nero became Emperor of Rome when he was just 16-years-old.

The transition went smoothly and a new era seemed to have dawned for the Roman Empire. Nero promised a ‘back to basics’ approach with Emperor Augustus as his model. The senate would have a greater say in national matters, be more respected and the new Emperor would reign with humanity and generosity. He was aided at this time by his teacher, the famous stoic philosopher Seneca. Yet, despite these high words and great promise, the accusations started rather quickly with the death of Britannicus, the natural son of Claudius. A few months into the new reign he dropped dead at an official dinner. Nero said it was epilepsy and had the body cremated the very next day. It was immediately said that Nero had poisoned Britannicus as a rival to his throne after his mother Agrippina turned on him.

This would all seem to make sense, but to use this case as an example, it also tends to ‘smell funny’. Most of this story comes from a single source, Tacitus, who apart from his own prejudices, bases most of his information on the period on earlier accounts written by enemies of the emperors who often seemed in competition to out-do each other in lurid tales of imperial cruelty. In the case of Britannicus we see more of the same; familial hatred, molestation and murder. The account goes so far one is inclined to disbelieve it. If one were to believe every such story it would seem that the Roman Empire was ruled exclusively by insane, murderous, incestuous pedophiles -which would seem to be a fairly far-fetched notion indeed. For Emperor Nero himself, the accusations made against him are multitudinous even if not reaching the extremes of some others.

That for which he has gained the most infamy was the murder of his mother Agrippina in 59. Normally portrayed as an ambitious and scheming woman who sought her own power through that of her son, if Nero is guilty of the crime most attribute to him, it is not all that outrageous as it may sound. Challenging the authority of a ruling Emperor is never a good idea after all. However, aside from this, it must be kept in mind that the numerous attacks, acts of thievery, rape and assorted sexual perversions on the part of Nero are all stories without any facts to back them up and began as simple rumors in his own time. That is not to say that all the stories were false but nor should they all be taken as an absolute certainty. What we do know from numerous accounts is that Emperor Nero was extremely fond of music and the theatre and that he enjoyed singing and playing the lyre. His musical talent is often mocked but this may have been more of a reaction to what many considered behavior ill-fitting a Roman Emperor than a true picture of his abilities.

In his more public “private” life Emperor Nero divorced his wife Octavia in 62 to marry his mistress Poppaea (whose husband he had appointed governor of Lusitanian -roughly speaking modern Portugal). Octavia was killed soon after but Poppaea did not outlive her by much when Nero supposedly killed her in a rage in 65 after which he married again though the lurid rumors of his romantic escapades continued unabated. Yet, this was the same man who, upon first coming to the purple, agonized over signing his first death warrant and who advanced well respected and learned men in his government. Many of the later government policies that were very unpopular (higher taxes, land confiscation, inflation and treason trials) did not actually originate with Nero but with his scheming minister Tigellinus.

One of the most infamous incidents to which the unpopularity of Nero is attributed was the great fire of Rome in 64. Because the Emperor later built a magnificent palace on land destroyed by the fire many accused him of setting it himself and hence the popular story that Emperor Nero, “fiddled while Rome burned”. Today this is often taken for granted to be a fact based on the circumstantial evidence that Nero built a palace where the fires had burned (a motive) and because he blamed the Christians for it and had many martyred (most famously Sts Peter and Paul). Again, however, there is no solid proof of this and it is also often forgotten that Nero was not in Rome at the time but rushed back upon hearing of the disaster. He organized numerous measures to help the victims such as opening up cheap stores of grain to the public and allowing public buildings to be opened to those who had lost their homes in the fire. He afterward enacted strict regulations to prevent such a disaster in the future and his overall economic situation, like Rome as a whole, suffered terribly because of the fire.

Much of the persecution associated with the reign of Nero likely stems from these money troubles and led to intensified hatred between the senate and the Emperor -a not altogether uncommon occurrence. Still, unlike some emperors, Nero was not a big traveler and stayed mostly at home. His only foreign trip was a grand tour of Greece undertaken not so much for political reasons but for the great esteem in which Nero held all things Greek, finding the somewhat more literary and artistic atmosphere much more to his liking. He wanted to participate in as many Greek customs, festivals and games as possible, all of which he greatly enjoyed but which still lowered his popular image as such exhibitions were considered unseemly for a Roman Emperor.

However, given how unpopular Nero is held to have been, it should be kept in mind that this was largely centered on the senatorial class. In fact, many at the time criticized Emperor Nero for being too obsessed with keeping the favor of the common people. Early in his reign he passed many laws aimed at making life better for the lower classes such as reducing fines, legal fees, protecting the rights of freed slaves, fighting corrupt tax collectors and bureaucrats, made tax records public and even tried to abolish all indirect taxation. Military victories over Parthia made him extremely popular in the eastern half of the empire and when harsh measures provoked the rebellion in Britain of the famous Queen Boudicca, once it was suppressed Nero put a more moderate man in charge of the region. Overall his policies seemed aimed at making the Roman Empire a more traditional, possibly more Greek style of monarchy. Yet, the bias against Emperor Nero was talked about as early as the Romanized Jewish historian Josephus who pointed out that Nero was slandered by many for personal motives having nothing to do with pursuing truth.

In the end, his unpopularity with the senate and anger over his economic policies provoked a rebellion against him. It is often thought that if he had made a bold stand he might have survived but he attempted to flee to the east (where he was more popular and even held to godlike status by some) but even his guards abandoned him. Fearing that he would be captured, humiliated and executed anyway he stabbed himself in the neck on June 9, 68 AD. He was obviously not good in a crisis and his rule became worse over time. He was not an upstanding moral man but he was also probably not the monster he is often portrayed as. Perhaps most infamous for his persecution of Christians, and understandably so, these were a fairly a small minority at the time and most of the other crimes he is accused of are based on rumor rather than fact. He was no model monarch by any means, certainly not, but he was certainly a much more complex individual than is often recognized and not without at least some qualities and actions in his favor.
Posted by MadMonarchist at 11:07 AM