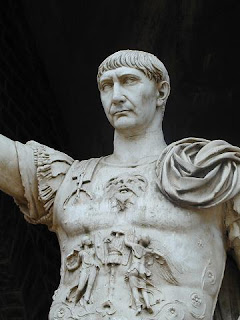 In any listing of the greatest emperors of western civilization, one name that will certainly make the list is that of the Emperor Trajan. Many remarked on how his behavior seemed to match well his commanding presence. Cassius Dio, consul and historian, wrote of Emperor Trajan that, “His association with the people was marked by affability and his inter-course with the senate by dignity, so that he was loved by all and dreaded by none save the enemy”. That last line is significant for Trajan has certainly been most remembered for his victorious military campaigns more than anything else. Under his rule the Roman Empire reached the peak of its expansion, never before or since would so much of the world be ‘Roman’ as during the reign of Trajan. He was also though, an able administrator, setting up a more normal situation after the innovations of Emperor Domitian, and a great builder who left Rome more glorious than he found it.

He was born Marcus Ulpius Traianus on or about September 18, 53 AD in Spain. His father had an illustrious military and civil career having led the X Legion in the Jewish War, served as consul and as governor of Syria. Young Trajan served with his father in Syria and rose to command the VII Legion “Gemina” in southern Spain. He aided in suppressing a rebellion against Emperor Domitian and so gained imperial favor being successively named praetor and consul. When Nerva became emperor in 96 AD he made Trajan governor of Upper Germany where he was serving when Nerva adopted him as his son and heir. So it was that on January 28, 98 AD that Nerva died and Trajan became Emperor of Rome. With his authority secure he showed his care by first touring the Rhine and Danube frontiers before going to Rome to officially take up the purple.

When he arrived in Rome Trajan was enthusiastically celebrated but made it a point to behave with friendliness and modesty to all, senators and commoners alike. He was an absolute ruler but never treated the people with contempt and patiently dealt with the senate with the utmost respect. Because of this welcome change he had praise and adulation heaped on him from every section of society. Yet, it seems to have had no ill-effects on him as his nature inclined him to disregard flattery. He preferred hunting, hiking and rock climbing and while devoutly religious he preferred to worship privately without show or ostentation. Similarly his wife, Lady Plotina, was described much the same; regal in bearing but modest in dress and unassuming. One would be tempted to suspect sycophancy from all the praise heaped on Emperor Trajan but his many accomplishments prove that praise directed at him was mostly deserved.

As a ruler Emperor Trajan worked tirelessly to defend, expand and improve the empire. He improved the road system, built bridges, established imperial funds to aid the poor (children especially) and remarkably this system of social welfare (first considered by Nerva) worked well and went on caring for Roman children for nearly 200 years. He enacted extensive building programs throughout his reign which left many remarkable monuments such as Trajan’s Forum, Trajan’s Market and, perhaps most famously, Trajan’s Column. This last monument was built to celebrate the military victories in the Dacian Wars and the military victories of Emperor Trajan were many. He was a very skilled military commander and much adored and respected by his troops. He fought three large-scale wars during his 19-year reign as Emperor and the first two were against the powerful Kingdom of Dacia in what is now Romania.

Emperor Domitian had fought the Dacians to a negotiated peace but the Dacian king, Decebalus, was ostentatiously spurning the terms of that peace and Emperor Trajan decided to strike before the situation worsened. In 101 AD the Emperor left Rome to command his legions and inflicted a sharp defeat on the Dacians at Tapae. King Decebalus launched a counter-attack across the Danube that winter but was repelled by the Roman defenders. The next year Emperor Trajan renewed his offensive and fought to the outskirts of the Dacian capital of Sarmizegethusa at which time Decebalus sued for peace. Emperor Trajan spared the Dacians further humiliation but annexed considerable territory to the Roman Empire before returning to the Eternal City for a grand triumph and the award of the title “Dacicus” by the senate.

The peace had not been harsh by Roman standards but nonetheless Decebalus did not seem to learn his lesson. Flouting the terms of their agreement yet again he used the peacetime interlude to rebuild his forces and plan new attacks so that by the summer of 105 Emperor Trajan had to take to the field once again. The Dacians attacked and captured a number of Roman frontier outposts but Trajan had wisely built a large bridge across the Danube which greatly increased the speed with which he could get his forces into striking position. As the imposing Emperor and his battle-hardened legions approached Decebalus was abandoned by many of his allies and he was driven to desperation, even attempting to assassinate Trajan but to no avail. After all of his past antics, this time the Emperor was in no mood to be forgiving. Sarmizegethusa was captured and sacked by the Roman forces, the royal treasury emptied and carried back to Rome and the Dacian king was forced to flee for his life before finally committing suicide. All of Dacia became a Roman province and Trajan’s Column was erected to celebrate the victory.

There was another triumph for the returning Emperor and 10,000 gladiators fought in the long series of games held in celebration. The captured loot Trajan brought back was put to use on his many building projects. For several years there was peace during which time Trajan devoted himself to improving and embellishing Rome. However, the blast of war came again in 114 when the primary rivals of Rome in the east began interfering in the border Kingdom of Armenia. This would put the Parthians on the doorstep of Rome and Emperor Trajan gathered his legions and marched east, drove out the Parthian influence and annexed all of Armenia to the Roman Empire. The following year he turned south and marched into modern-day Iraq and by 116 he had conquered the entire region to the Persian Gulf and captured the Parthian capital near present-day Baghdad. The Roman Empire had reached its peak, stretching from the Persian Gulf to the Atlantic Ocean and Hadrian’s Wall in northern England to the Sudan.

However, Emperor Trajan was beginning to suffer more and more ailments and the strain of such campaigning could not have helped. In 116 he had to suppress an uprising by the Mesopotamians which proved more difficult than expected (imagine that) and the following year an attack on the city of Hatra failed with Trajan himself narrowly avoiding death. Word then arrived that the Jews in Cyrenaica had risen up and the rebellion was spreading to Egypt and Cyprus. There were also rumblings of trouble from the northern frontier. Emperor Trajan left his army in Syria and began the trip back to Rome to take charge of things but fell ill along the way. He suspected someone had attempted to poison him. Nonetheless the result was a stroke which left him half-paralyzed and on August 9, 117 AD the great Emperor died at Selinus in what is now Turkey. His body was taken back to Rome, cremated and his ashes buried in a golden urn at Trajan’s Column.

In his own time and ever since Trajan had been held up as a model Emperor of Rome and an example of everything such a monarch was expected to be; strong, imposing, tolerant and humble, absolute but respectful, harsh when necessary but charitable to the downtrodden, hard working, brave and victorious in war. Noted author Edward Gibbon named him as one of the “Five Good Emperors” and every time a new emperor came to the throne after him the senate would pray, ‘felicior Augusto, melior Traiano’, “may he be more fortunate than Augustus and better than Trajan”. Even after the rise of Christendom in the Middle Ages, despite being a pagan, Christian writers could not consign Emperor Trajan to Hell. Unlike all other pre-Christian Roman Emperors the poet Dante placed Trajan in Heaven and a legend even spread that Pope Saint Gregory the Great raised him from the dead and baptized Emperor Trajan to ensure his place in Paradise. Certainly few other monarchs in history have been so celebrated in their own time and so widely honored for so long since. 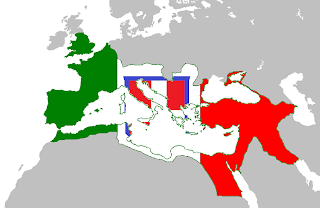 Posted by MadMonarchist at 11:47 AM