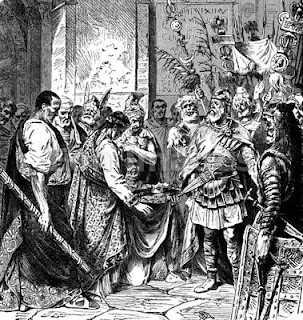 It was on or about this day in 476 AD that the German chieftain Odoacer was proclaimed rex Italiae by his troops after his revolt overthrew Emperor Romulus Augustulus, usually considered the last of the Western Roman Emperors. However, many people have a mistaken view of Odoacer and how he behaved after he and his mutinous forces deposed Emperor Romulus. Odoacer, although his rule was based on power, had the belated support of the Roman Senate and he claimed to be using his authority on behalf of the Emperor Julius Nepos, exiled Western Roman Emperor who had been replaced by Emperor Romulus through the betrayal of his father, Orestes, who had been in the employ of Julius Nepos (after having been a chief lieutenant of Attila the Hun). Although his rule was mostly unquestioned, Odoacer usually only claimed to be the agent of Julius Nepos or, after his time, the Eastern Roman Emperor who still claimed sovereignty over the whole of Italy. Eventually he did get involved in the Byzantine intrigues of the west and was at first successful in the war that followed, conquering Austria. However, the Eastern Emperor told Theodoric the Goth that he could be King of Italy with imperial blessings if he could defeat and kill Odoacer. After fighting his way onto Italian soil Theodoric invited Odoacer to a banquet where he was poisoned and killed in 493, clearing the way for the reign of King Theodoric the Great. 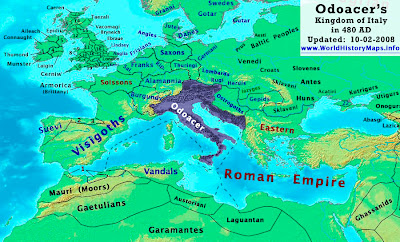 Posted by MadMonarchist at 11:49 AM