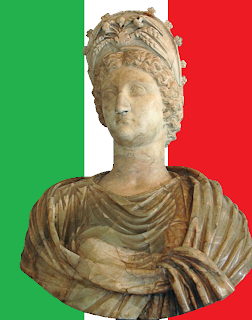 Livia Drusilla, also known as Julia Augusta, was the first Empress of Rome. Like her husband, the Emperor Augustus, she set the standard by which all subsequent imperial consorts would be judged and she set that bar quite high. Aside from being the wife of Emperor Augustus she was the mother of Emperor Tiberius, grandmother of Emperor Claudius, great-grandmother of Emperor Caligula and great-great grandmother of Emperor Nero. Livia Drusilla was born on January 30, 59 BC, the second daughter of Marcus Livius Drusus Claudianus and his wife Aufidia, a respected, upper class Roman family. In 43 BC her father married her to Tiberius Claudius Nero, who was her patrician cousin and, incidentally, an enemy of the faction of Julius Caesar and his nephew and adopted heir Octavian (later Augustus). A year later she gave birth to her first child, the future Emperor Tiberius. So deeply involved was her father in the plot against Caesar that he killed himself at the battle of Philippi along with two of the main assassins of Caesar. Her husband continued the struggle though, fighting with Marc Antony against Octavian during his rise to power. When Octavian proved victorious Livia Drusilla had to flee, with the rest of her family to Sicily and later Greece.

When Livia Drusilla returned to Rome after a general amnesty she was pregnant with her second son (Drusus the Elder) when she met Octavian who, despite being married at the time, fell instantly in love with this woman from a family who had long opposed his own. In 39 BC Octavian divorced his wife Scribonia on the very same day she gave birth to his only surviving child; Julia the Elder -who would herself grow up to have a pretty scandalous reputation, but what a traumatic day for Scribonia! Tiberius Claudius Nero divorced Livia who gave birth to his second son only three days before she married Octavian with her ex-husband ‘giving he away’ at the wedding. There was a real attraction between Octavian and his new wife but, as usual, there were some political considerations involved in all of this as well. Tiberius Claudius Nero knew that, despite his efforts, Octavian was the new man in charge, soon to be monarch in charge, and Octavian also knew that he would need an alliance with a member of the patrician class to gain more support amongst the republican elite. Traditionally the common people had been the base of support for Julius Caesar and the rise of his family in Rome. Certainly by the standards of pagan Rome, and really by any standards, they had a very successful and certainly a very enduring marriage which lasted 51 years; as long as they lived. 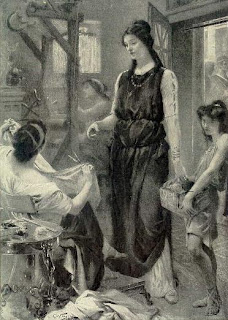 Not long after Marc Antony was defeated and Octavian became Augustus Caesar, the first Emperor of Rome. He was very careful to tread softly in introducing an imperial monarchy to the traditionally republican Romans and his wife was instrumental in helping him in this regard. They did not live in lavish luxury nor were they extravagant in any of their habits. Livia Drusilla was the model Roman wife but she was also influential, the most trusted advisor of the Emperor and someone who was not shy with her opinions but who often interceded with her husband to get things done and obtain appointments for those she favored. Yet, in their modest home Livia Drusilla was a devoted wife. She made most of the clothes the Emperor wore, attended to the household and set an example by refusing to wear lavish gowns or expensive jewelry but instead being very charitable, very generous and urging the Emperor to show mercy to his enemies and bring people together under the new monarchy. Her husband was so appreciative of her that he gave her financial independence, erected a statue of her for the public to honor and she came to have a sort of secondary court all her own. All across the empire she came to be revered as the ideal Roman wife.

However, the Empress was not without criticism. As with so many of the Roman emperors there were those who tried to portray Livia Drusilla, not just as an imperfect consort, but as a scheming, ambitious and even murderous woman devoted to securing the power of her children, her favorites and herself. However, the fact is that almost all of these accusations are totally baseless with nothing more to back them up but convenient assumption. Emperor Augustus did have his step-son Tiberius married to his own daughter and eventually adopted as his heir but this was a long process and depended on the loss of other candidates that his wife could have had nothing to do with. Even Roman historians who were no great supporters of the imperial monarchy dismiss accusations against Livia as totally unfounded. She was proud, regal, very conscious of her position in the empire and in the public eye but she was certainly no scheming murderess. She had her favorites and tried to advance them as was common at the time and as the wife of Augustus Caesar she was able to accomplish a great deal in this regard and this is probably the source of such accusations.

Although Augustus had not been an entirely faithful husband, Livia had been a very faithful wife and remained so until the death of her husband in 14 AD. She saw her son Tiberius become Emperor of Rome and her late husband deified by the senate. Augustus had left one third of his estates to his wife, the rest to her son and his adopted heir. He extended her official membership into the Julian dynasty and the title of Augusta. Thus honored by both her late husband and her son she was able to live a comfortable life in her remaining years, using the name Julia Augusta, as a very honored and revered figure in Roman life. However, her power and prestige eventually caused a rift between her and her son Tiberius who blocked the senate from granting her the title of ‘Mother of the Country’. Some have asserted that when Tiberius left Rome for his pleasure grotto on Capri it was to get away from his interfering mother. They were still at odds when she died in 29 BC and Emperor Tiberius blocked efforts to grant her further honors by the senate. Her full titles would not be restored until the reign of Emperor Claudius. At that time, in 42 BC, Julia Augusta was deified and statues of her placed alongside her husband in his temple.
Posted by MadMonarchist at 10:57 AM