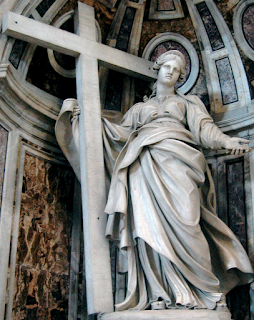 One of the most honored monarchs of the early Christian era is certainly the Empress Saint Helen or Helena, mother of Constantine the Great, the first Roman Emperor to become a Christian. It is not known exactly when or where Helena was born; some placing her birthplace in modern Turkey while other legends claim she was the daughter of a British king born near modern-day Colchester. The year of her birth has been estimated as sometime between 240 and 250 AD. Nevertheless at some point she met and married the general and future Roman Emperor Constantius I. Whether she was a full wife or a concubine is unknown but sometime after giving birth to their son Constantine (probably in what is now Serbia), Constantius divorced Helena and for a time she lived alone with only her son to comfort her. She never remarried and Constantine grew up very attached and devoted to his mother.

In 306 AD Constantine became Emperor of the Roman Empire. He is famous for reuniting the two halves of the empire and for making Christianity legal. No doubt a leading influence on his life in this direction was his mother Helena who Constantine gave the title “Augusta” in 325. That same year, with official access to the authority that went with that title, she embarked on a pilgrimage to Jerusalem to recover what Christian relics she could. Along the way she had a church built in Egypt in honor of the burning bush on Mt Sinai. At Jerusalem she had the Temple of Venus torn down that had been built near the tomb of Christ.

During the excavations involved with this and the founding of a new church on the site she discovered the relics of the True Cross and the nails used in the crucifixion which she carried back to Rome. At the site of her discovery her son later had built the Church of the Holy Sepulchre. She venerated the relics she had found in the private chapel of her palace which was later converted into the Basilica of the Holy Cross in Jerusalem. Among the other relics she found were the Holy Tunic and pieces of the rope which suspended Christ on the cross. She founded a number of churches and monasteries and contributed relics to a number of sites around the Mediterranean world.

St Helen, Empress of Rome, died in 330 AD with her son Constantine beside her. Her sarcophagus can still be seen in the Vatican museum. During her life St Helen was a source of great strength and affection for her son, and her spirituality was doubtless a source of inspiration to him. She was also greatly beloved by the ordinary people for her kindness, her generosity to the poor, the prisoners she liberated and her habit of worshipping with the rest of the Christian community with no finery or special treatment. Both the Roman Catholic and Eastern Orthodox Churches recognize Empress Helen as a saint.
Posted by MadMonarchist at 11:37 AM