Louise of Savoy, Duchess of Anjou 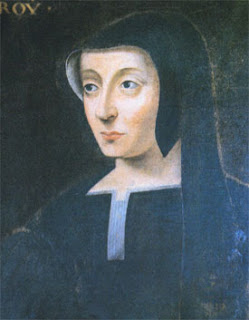 Princess Louise of Savoy was one of the most formidable royal women in France who never held the position of Queen-consort. She was born on September 11, 1476 at Pont-d’Ain to Duke Philip II of Savoy and Princess Margaret of Bourbon. From early in life she learned how cruel the world could be and that she would have to be made of tough stuff to make her way in it. At the tender age of seven she lost her mother and was sent to Anne de Beaujeau to be raised. Anne, at that time, was ruling France as regent for her brother King Charles VIII. For Princess Louise, her life was mapped out for her almost as soon as she could be aware of it. Only a few years later, at the age of eleven, she was married to Charles of Orleans, Count of Angouleme on February 16, 1488. This was not uncommon at the time and the two did not live together as man and wife until Louise was fifteen years old. Although he was not a faithful husband, Charles and Louise had a mostly happy marriage, both had a love of learning and deep-seated attachment to each other even if “true love” was not to be found. In 1492 Louise gave birth to their first child, Marguerite d’Angouleme and in 1494 to a son, the future King of France, Francois d’Angouleme. Charles also had two illegitimate daughters; Jeanne and Madeleine, who were raised alongside his own children by Princess Louise.

Despite his infidelities, Princess Louise was truly distraught when Charles fell ill and died in 1495, having caught a chill while out riding. She had faithfully nursed him in his final days and when he died Louise was left a widow at only nineteen years old. For others, this might have been the end of the story, but Princess Louise had a much sharper mind than most supposed and she was determined to do the best she could for her children. After King Louis XII came to the throne, she took her children and relocated to the court and made sure that her children received the very best education, benefiting from the latest flowering of the Italian Renaissance. She was herself very interested in the latest discoveries and took care to keep herself well informed about politics, the diplomatic situation and all the events at court. She was aided in this by her confessor, an Italian Franciscan named Christopher Numar of Forli, who would go on to great fame himself in the Catholic Church, being raised to the Sacred College (against his protests) by Pope Leo X. As her son grew to adulthood, Louise made sure that he remained close to the King. Francis became such a favorite of the King that he arranged the marriage of the boy to his daughter Claude in 1514. It all worked out as had been hoped and King Louis XII chose Francis to be his heir with his wife and Princess Louise as regents.

The following year King Louis XII died and King Francis I came to the throne but, for the moment, it was Princess Louise, mother of the king, who held the most power. Eventually she was given the titles of Duchess of Angouleme and later Duchess of Anjou but one of her first legal battles was over the inheritance of the Duchy of Bourbon which she claimed as did Duke Charles III of Bourbon. In an effort to settle the dispute she offered to marry the Duke who disparagingly refused her. The old saying that, “Hell hath no fury…” was never more true as Louise of Savoy turned her wrath against the Duke, using every bit of influence she had to destroy him and she effectively did. He was exiled, punished for rebellion against the King, lost his lands and titles and was never able to recover them while Louise of Savoy gained all she had claimed. The Duchess of Anjou displayed a great talent in political affairs, an astute understanding of the diplomatic situation and in general a great talent in all areas save the person of her son, King Francis, concerning whom she had a noticeable ‘blind spot’ which should not be considered surprising. She ruled as regent while he son was off leading his armies and it was Louise of Savoy who arranged the magnificent display for the visiting King of England at the “Field of the Cloth of Gold”. It was also Louise of Savoy who managed to scrape up the money for her son to stand for election for Holy Roman Emperor, even though (wisely as it turned out) she thought the effort was a waste.

As, effectively, the most powerful woman in France, Princess Louise tried to secure strong allies for the kingdom. Her attempt to make peace with England in 1524 was not immediately successful but she had more success in reaching out to the Ottoman Sultan Suleiman the Magnificent. She asked for Turkish assistance in freeing her son (King Francis had been defeated by the Hapsburg Emperor Charles V and was being held prisoner in Spain) and for the Turks to launch an attack on the Hapsburg empire in the east to take pressure off of France. In 1529 she succeeded in making peace between France and the Holy Roman Empire as the primary French negotiator of the Treaty of Cambrai (aka the Ladies’ Peace) opposite her sister-in-law Margaret of Austria acting for the Empire. Not long after, the formidable mother of the King died on September 22, 1531. Still sharp and active to the very end she had been studying a comet when she caught cold and eventually passed away. Her valuable properties were left to the French Crown, which would be valuable future assets. Louise of Savoy may not be one of the best known royal figures in French history but she was one of the most astute and formidable women ever to hold a leading position in the Kingdom of France.
Posted by MadMonarchist at 11:50 AM